To most of my friends, deliberately leaving behind the comforts of home to sleep outside on the ground beside a tree seems absurd. Loading a kayak with things necessary to do this, then paddling for hours to be able to do it without running into anyone else doing it too, seems even more ludicrous. Fighting strong cross-winds, rollercoastering on the swell in Georgian Bay, screaming “whooaa” with each cresting wave while searching for the ideal, remote island, and sleeping in a tent wedged between a rock and a hard place and tied to a tree to prevent it from blowing away, makes people question your sanity. Fortunately, my daughter didn’t. She was keen to go with me.

At 150 miles long and 50 miles wide and with crystal clear water, Georgian Bay, on the east side of Lake Huron, offers some of the best boating in the world. Along its eastern shore from Port Severn in the south to the French River in the north, over 30,000 islands form the world’s largest freshwater archipelago, now a UNESCO world biosphere reserve. The small, windswept, Precambrian rock islands also extend further north to the small village of Killarney on the northern shore. 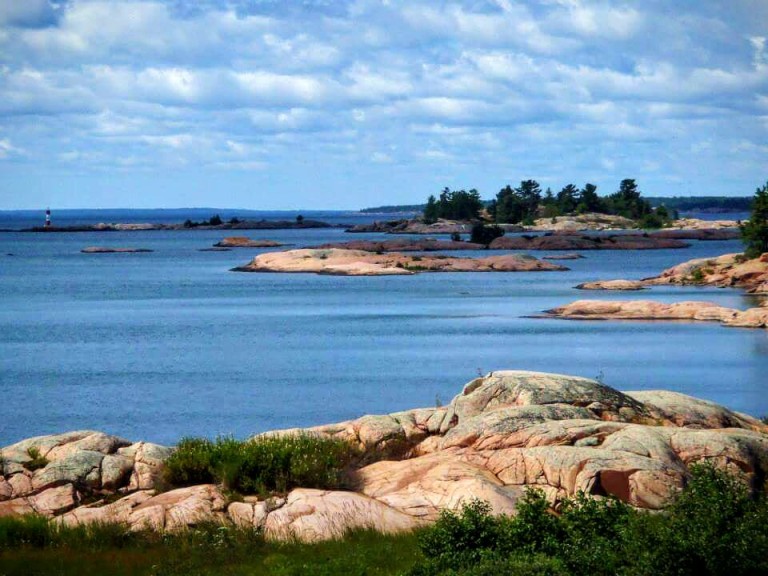 The uninhabited islands off the south shore of Phillip Edward Island are beautiful, and for a long time I have wanted to do a kayak trip there for ages. But as I get older most of my friends think they’re roughing it if they sleep in room without an ensure bathroom.

The islands face the long fetch of Georgian Bay and the prevailing winds from the west and southwest can quickly churn the water and make the many shoals treacherous. More than 60 lost ships in Georgian Bay since the late 1800s and hundreds of wrecked leisure craft are testament to its unpredictable conditions. Timing is everything, however, and in a small boat it’s possible to stay safely tucked in the lee of the maze of islands. Sunny, hot days were forecast and if we could get on the water early, the wind and waves should be manageable.

“Be prepared” is the boy scout motto and we were. Our food was carefully planned and packed to minimise odours and we had whistles, ropes, paddle floats, knives, saw, first-aid kit, naphtha stove, fire grate, kindling, waterproof matches, headlamps, flashlights, water filtration system, pots, pans, dishes, cutlery, folding sink, sleeping bags, inflatable sleeping pads, tent, folding chairs, our personal kit and even a space blanket. I’d been warned and seen recent photos of bears on these islands and heard that two weeks ago one had almost solved a complicated food suspension system. No problem. We had flares and bear bangers (explosives that launch skyward from a pen-sized tube producing an ear-jarring, shotgun-like bang) and we had bear spray. We were ready. We just had to somehow fit it all into our kayaks.

A 4-hour drive, two stops en route, kayak-packing and then stopping to clean gravel out of my jammed skeg put us out of the protected Chikanishing channel into the bay proper at 2 pm, the windiest time of day. A deer watched as we passed and I safely stowed my camera and prepared to cross the open water and round the windy point of Phillip Edward Island. 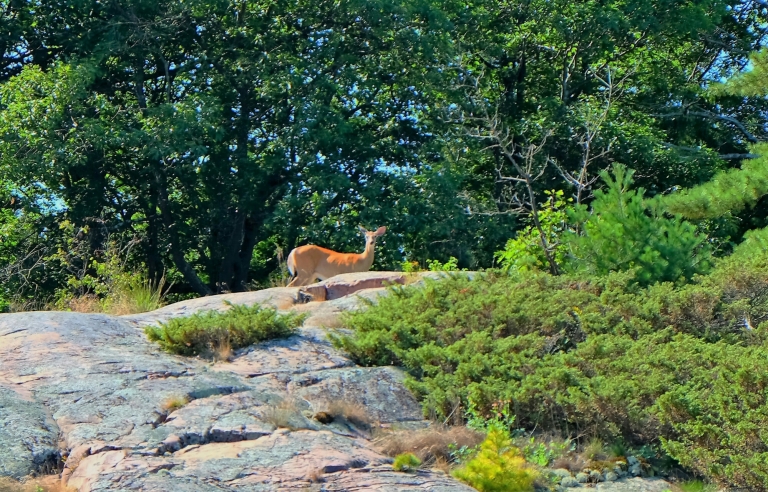 Punching the waves at an angle (to prevent them from hitting us broadside) while staying on course required a focused effort, and it wasn’t until we were safely on the leeward side of a small group of islands that we remembered we hadn’t had lunch. We stopped on one of the islands. It was then I discovered we had left most of our food in the car. Too late to go back. We pushed on in search of the ideal island – dry, clear spot for the tent with soil for the tent pegs, good food-hanging tree, safe sheltered spot to land and unload the kayaks and some wood for a fire. As the afternoon wore on our ideal-island standards were lowered and lowered.

In the end, the selling feature became a small patch of crunchy reindeer moss on which we could fit the tent. 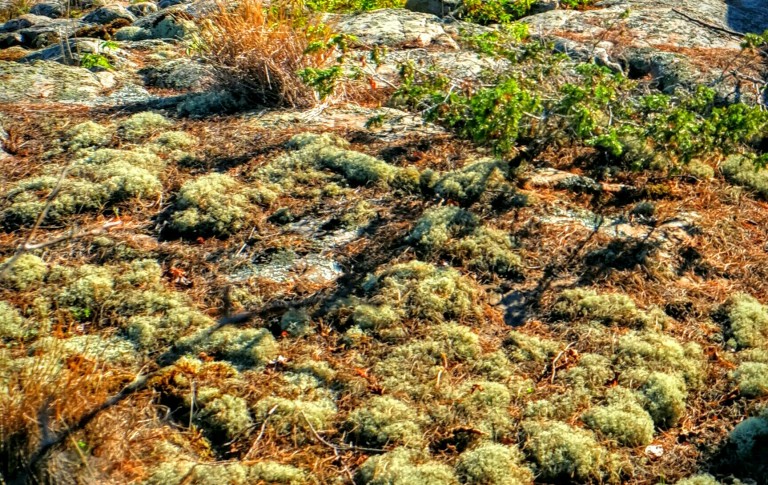 With no soil to hold a tent-peg, we secured the flapping tent to nearby shrubs and pegged it with stones. It was surprisingly comfortable. The fire started easily and once our evening meal was bubbling furiously we were feeling pleased with our small island. It was then that I discovered my sleeve was on fire. As my high-tech ultra light shirt melted rather than burned I ran to the lake to extinguish it. We cracked open a beer.

Finding the ideal food-hanging tree was a challenge and again we had to lower the bar. The best were dead and not sturdy enough. We argued over trees for close to an hour and decided that the only viable option, a young pine tree, stood in a thicket with many interfering branches. The branch we needed, although high enough, was weak and I was sure the weight of the food would bring it down to ground. Worse though, was the fact that we both threw like girls. Taking turns hurling a rock with the rope tied to it, it was dark by the time the rope made it over the branch. We hoisted the food. The soft pine branch drooped lower and lower to a level that a hungry bear standing on its hind legs could easily have knocked it down. “Right, I’m off to bed” said my daughter. It would have to do.

It was then that I discovered I had left my glasses in the car. Without them I’m blind and I knew that if I slept in my contact lenses they’d be permanently affixed to my eyeballs by morning. I took them out. What good would I be now in the face of danger? How could I see to run away? We heard a gunshot sound in the distance. It was then that I discovered we had left the bear spray and bangers in the car. Clearly, we should have just slept in the car. It had everything we needed and it was sitting outside on the ground beside a tree, so legally I think we could still have claimed to be wilderness women.

I took the pots and pans to bed intending to smash them together should anything dangerous show up. I knew bears routinely swim to get where they want to go but it was still windy and wavy, and I convinced myself bears were probably safety conscious and wouldn’t venture out that night. Comforted by this ridiculous thought and the rhythmic sound of breaking waves, I fell asleep.

We were lucky. It was a quiet night, the food remained in tact and we survived. What’s more, it was a calm and beautiful morning.

After breakfast, we paddled back to the car to collect the forgotten necessities and do some hiking. 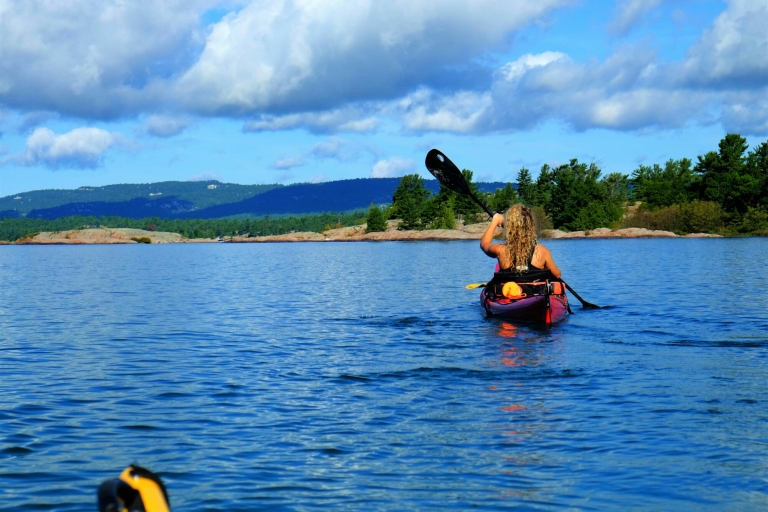 We spent the day on the mainland, hiking the surrounding quartzite hills to Lumsden Lake with lovely views of Georgian Bay to the south and the La Cloche mountains (now hills) to the north, east and west.

It was late afternoon when we reached our kayaks. The wind was much stronger than the day before. At the end of the Chikanishing channel we saw a group in a canoe turn around and head back to shore. We continued on because our beds outside on the ground beside a tree and all the rest of our food were on the ideal island. Our kayaks were empty this time and we bobbed up and down like corks on the waves. The hardest bit was approaching our rock island and climbing out onto the narrow ledge around it (the only place shallow enough to get out) without letting the boats become battered against the rocks.

Again, the wind had dropped by sunrise the next morning but we knew that would change and that it was best to be out before 10 am. 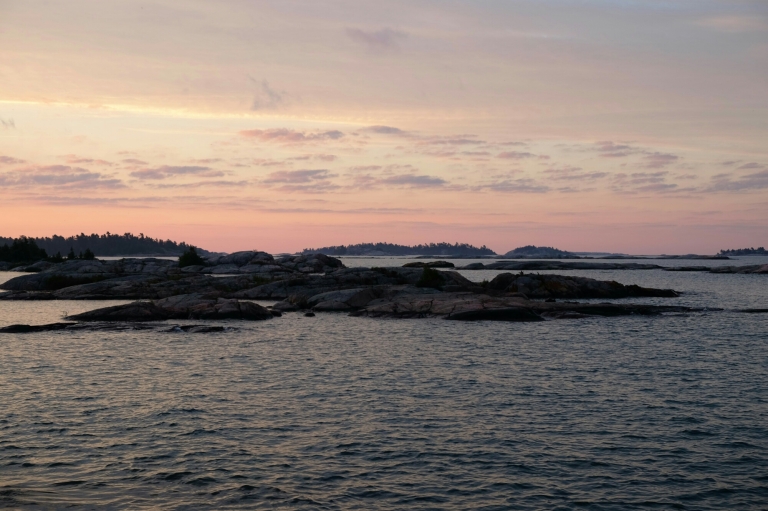 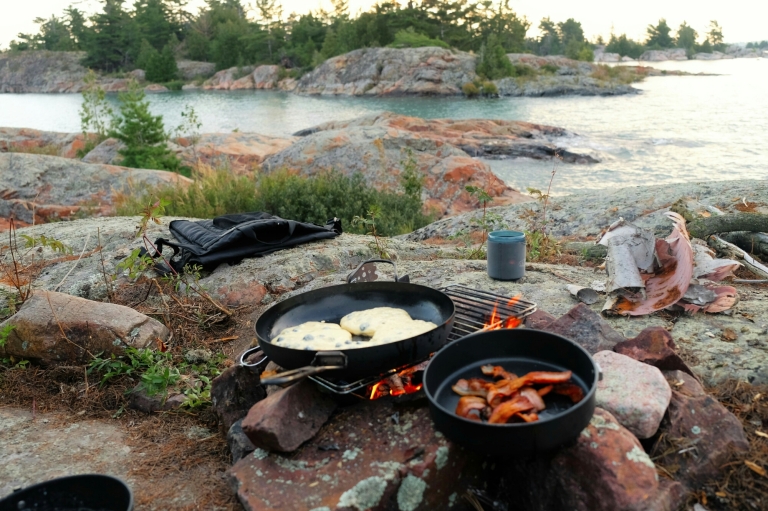 By the time we broke camp after breakfast, the wind had picked up. In our haste, we poorly packed the back hatch of my daughter’s kayak which jammed the rudder; she was traveling in circles. She managed to pull it up and so I pulled up my skeg as well. Steering with just our paddles, together we guided our kayaks that now kept trying to point into the wind. The waves soaked us as we paddled around Phillip Edward Island because our kayak skirts were, yes of course, in the car. 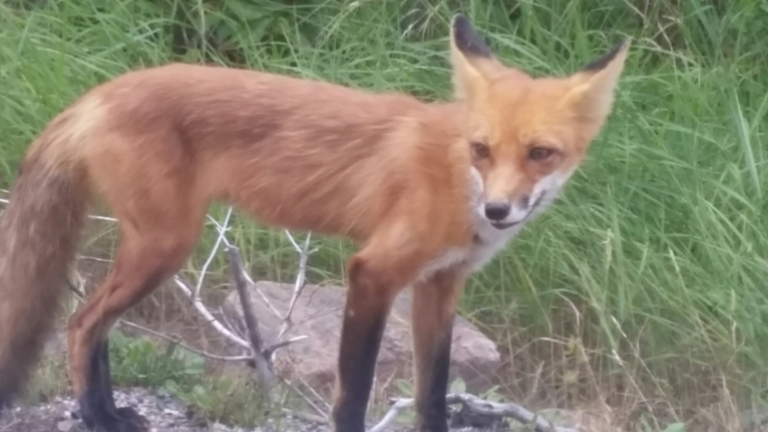 Once safely back at the car, it seemed a bit of let down – boring actually. A small fox on the road bid us goodbye and we drove quietly back into our everyday lives. I tell my friends about our adventure with all its discoveries. I tell them that my worries really turned out to be much ado about nothing. I tell them they should try sleeping outside, on the ground, beside a tree on an ideal island in Georgian Bay. “You’re insane” they reply.

3 thoughts on “A Weekend of Discovery on Georgian Bay, Ontario”