Hội An, which means “peaceful meeting place” was a nice break from the endless, ear-numbing noise of other towns we have visited. Even our hotel had a suitable name: Green Heaven. The inner city is restricted to cycling and walking, meaning that my chances of not being flattened by a motorbike improved considerably.  With about 120,000 people, Hội An is very much alive, mostly with tourists, and is recognized as a World Heritage Site by UNESCO. It is an ancient town dating from the 15th to the 19th century.  At night hundreds of lanterns add to its charm.

Given some free time to view historical sites, three of us became sidetracked by a local tailor advertising same day suits. The novelty of made-to-measure clothing (foreign to my wardrobe) ready within hours and for very little money, overcame the insipid lure of another local museum. Soon the two cycling Steves and I were choosing designs and material and undergoing measurement (during which I became acutely aware that despite the daily cycling I must cut back on the phở Bà )

I am not much of a travel shopper, so I blame my impulsive about-face in shopping behaviour on one of the Steves. While helplessly caught up in his frenzy, as he ordered a full suit, four shirts, a blazer and two ties in 30 minutes, I felt certain there were clothes I needed as well. What’s more they assured him that all would be shipped back to the UK within 6 hours. Fortunately, the second Steve’s sensibility rescued me from the vortex and I was restrained in my purchase. But I do admit to feeling very posh having to excuse myself at dinner to “pop out for a fitting”. And yes, I am fully aware that the likely reality is an adjacent factory with 300 tailors hovering over sewing machines for 12 hours a day to indulge me (bubble-burst).

We squeezed in a 15 km ride to the beach for a swim before dinner and drinks, and along the way picked up a new member. He was hard-pressed to keep up though so we quickly left him behind. 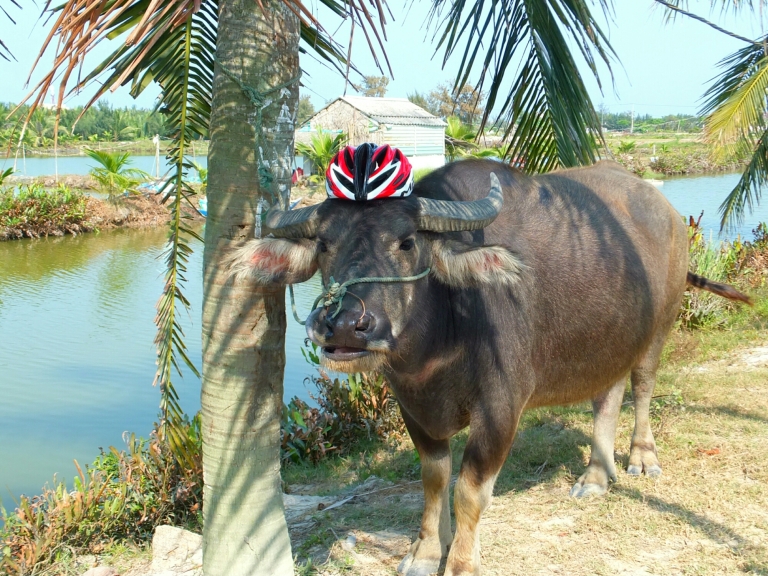 Leaving a very much alive city at day break, we cycled off to visit a dead one. This included a 30 km ride followed by a 10 km climb over Hai Van pass, which was featured in a Top Gear episode and has been said to be one of the best coast roads in the world. The mist and light drizzle were cool and helped me succeed but the view from the top, given the weather, was a bit deflating. The descent, which might have been wildly exhilarating, was slowed by pouring rain. All was put right though with the view over the Lãng Có lagoon when the soggy cyclists stopped for lunch; it was serene and almost ethereal in the muted light. 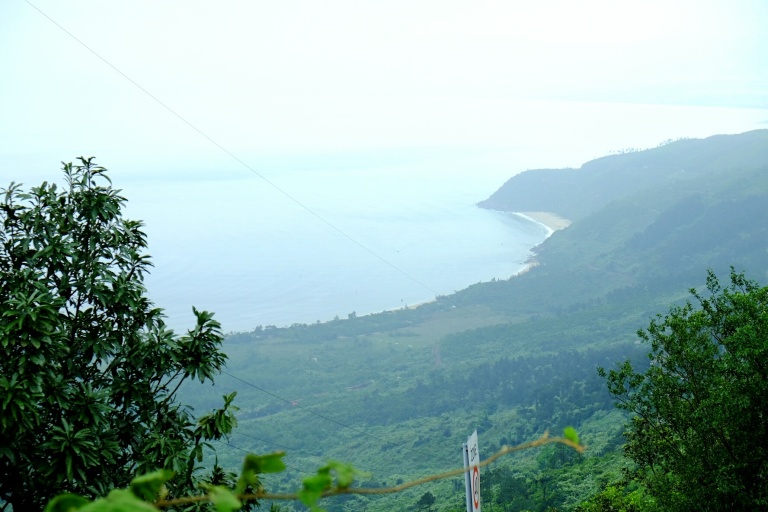 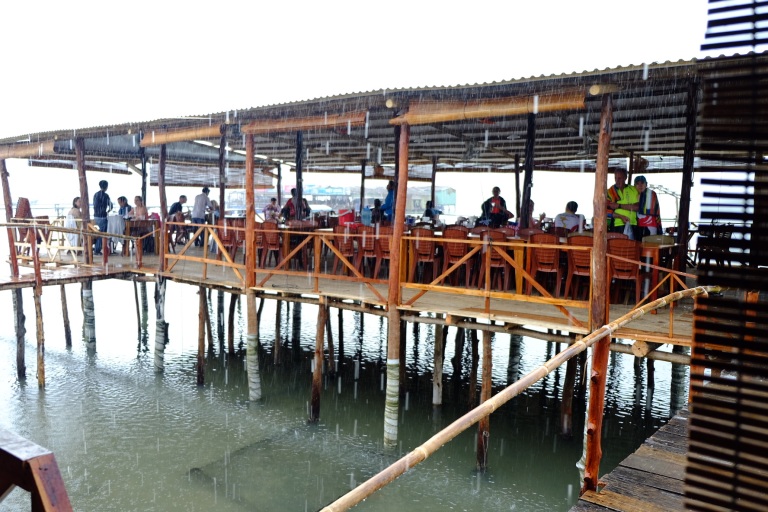 The climb that day had one fewer member. One of the more competitive cyclists in the group had a large, hard-shell backpack he never removed. Its contents remain unclear, as it was never opened. He had apparently bought it to wear when going clubbing at home, and felt that it was also necessary cycling gear. Some of us affectionately named this jetpack Wilson (as in…dummy in the film Cast Away). Wilson became a bit of an annoyance to some I was told, as he occasionally tried to slip into the bed belonging to the buff cyclist’s roommate. On this day we were shocked to see that Wilson was abandoned to make for a speedier ascent up the mountain. As I recall though, his finish time was uninspiring.

Another 30 km brought us to the City of the Dead, the tombs of An Bang. Also a UNESCO site, these tombs date back centuries and are maintained by the families. Only the wealthiest of families can afford this real estate and strict criteria that must be met to reside in this city. First, you must be dead – not a strong selling feature. Second, your house must meet code – constructed from concrete, and FULLY decorated (which in itself would be a lot of work) with unicorn, turtle, phoenix and dragon. I’ve eliminated this as a potential ex-pat city. 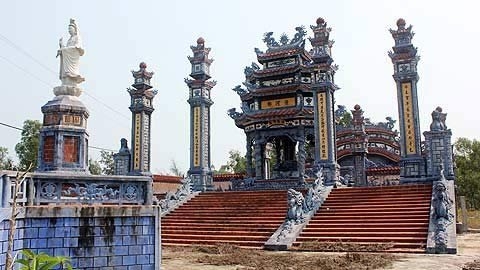 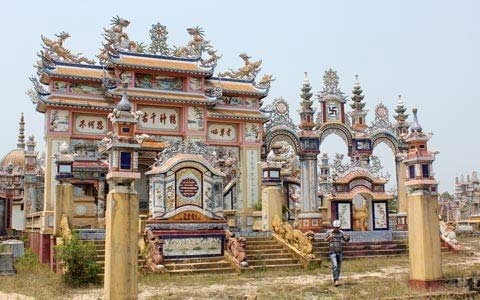 Morning brought a cycle to the Forbidden Purple City, home of the Nguyen dynasty emperors. It was built in 1802 in Hue, the newly established capital city. The inner sanctum housed the Emperor’s many wives, numerous concubines, small armies of children and an assortment of eunuchs. Between this and forcing common people to change their names to Nguyen, is it any wonder that Nguyen is the name held by close to 40% of Vietnam’s population, or an estimated 38 million people?

We also rode to our guide’s home where we met his wife and daughter and were invited in for one of the best lunches of the trip. Then back to Hue where we hopped aboard the overnight all-you-can-drink (really) mojito party train to Hanoi. Our guide’s luggage consisted of passion fruit (50-ish), rum, limes and lemons and some gin and tonic for the non-mojito crowd. He spent the night mojito-making and our 4 person berth somehow became the designated party berth. We all made a rather subdued and bleary-eyed entrance into Hanoi the next morning at 5 am. But no rest for the wicked, as it didn’t end there…we continued on to Halong Bay to board the party boat and motor out to pick up our kayaks and watch monkeys! 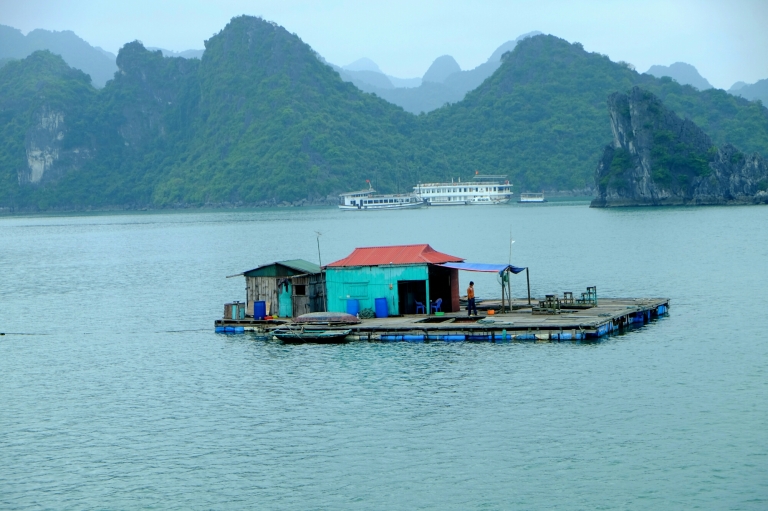 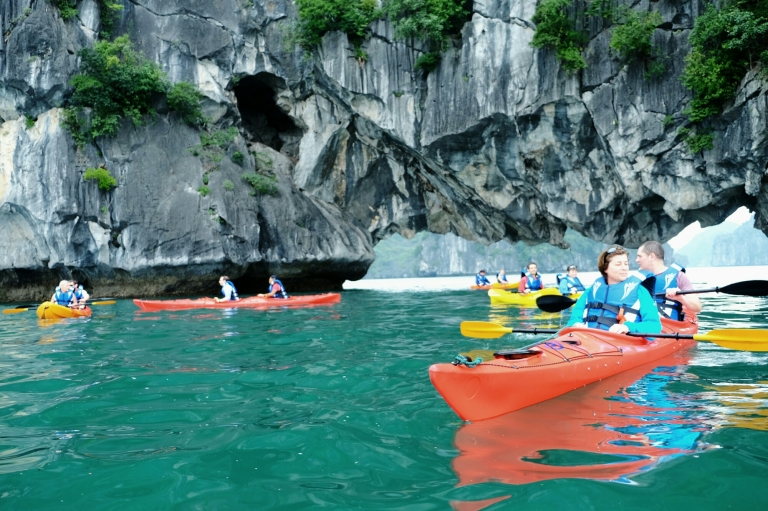