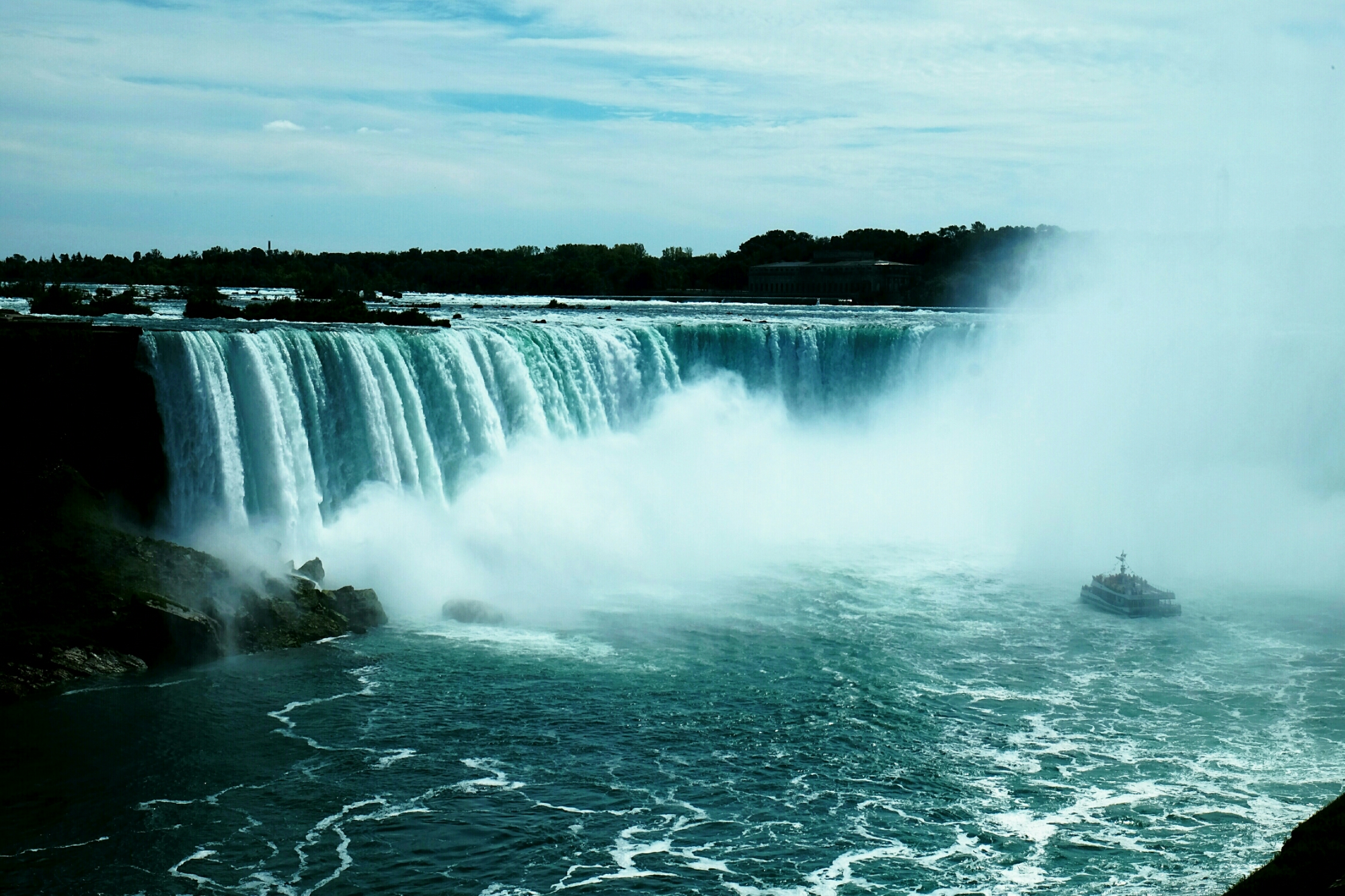 The Niagara region sits between Lake Ontario and the Niagara escarpment and has long been known for its many vineyards and orchards. Cycling the vineyards tasting wines has become an annual event that I have done with friends, my brother, sister, and each of my children. Beginning in Niagara-on-the-Lake, riding a 50-60 km loop and visiting 10 to 15 wineries makes for a full day if you manage to stay upright on your bike. There are dozens more, but even 15 is a stretch assuming one stops for lunch…and a full glass of wine. 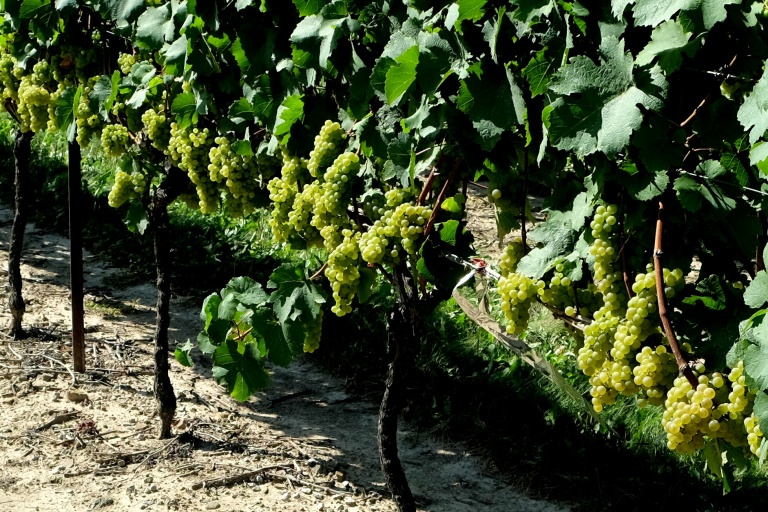 Over the years, with sampling price increases and sample size decreases it has become a somewhat expensive and rather more sober activity. On my trip this year with one of my daughters and a friend we instead chose to forgo the vineyards and do a 60 km ride along the Niagara River from Niagara-on-the-Lake to Niagara Falls and back. This scenic ride, mostly on paved bike paths, with lunch and a beer overlooking the Falls was a nice change. 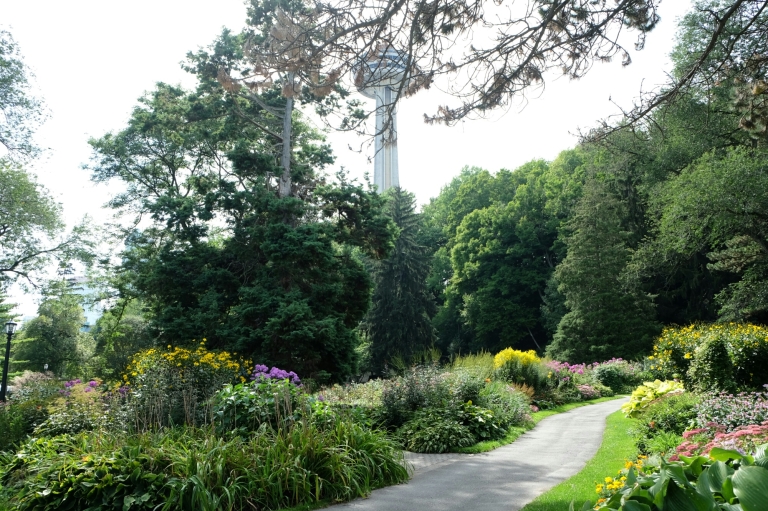 Perhaps the prettiest town in Ontario, Niagara-on-the-Lake is a preserved 19th century village full of interesting shops, restaurants and pubs and is home to the Shaw Festival, the second largest repertory theatre company in North America. 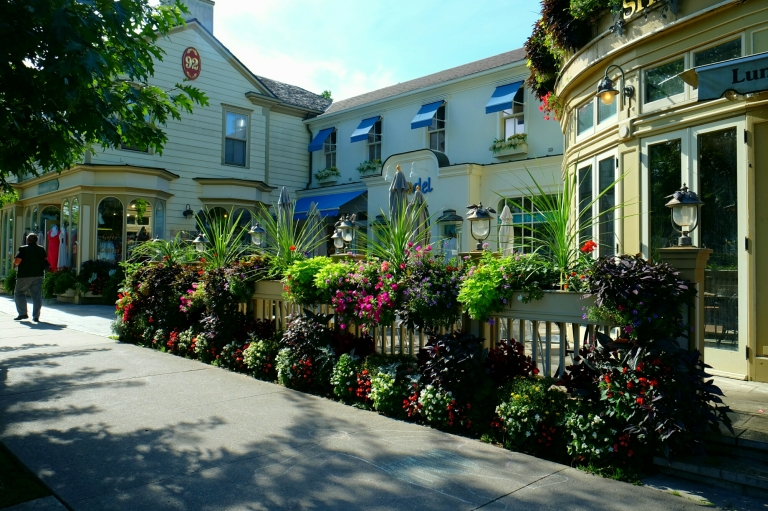 As we set off, without alcohol as a focus, I satisfied my need for planning and purpose by suggesting that learning more about the history of the area become our mission. (Funny, but I now don’t recall achieving consensus on this, something I should perhaps have considered more closely at the time).

Fort George, the first historical site on our route, was built by Britain after the American Revolution to defend against possible invasion by the USA. This was a wise move on Britain’s part. In 1812, President James Madison declared war on Britain and the Americans marched in to annex Canada in what was assumed (even by Thomas Jefferson) would be a cake walk. It was a small war, hardly noticed as the ongoing Napoleonic wars captured most of Britain’s and much of Europe’s attention. Although outnumbered, the surprising defeat of America by the United Kingdom, its colonies in Upper and Lower Canada and its aboriginal allies was a turning point and key contributor to the making of our country. With our original borders left in place by the Treaty of Ghent it had a profound influence in galvanizing a Canadian identity, clearly separating us from America and setting Canada firmly on a path towards nationhood. 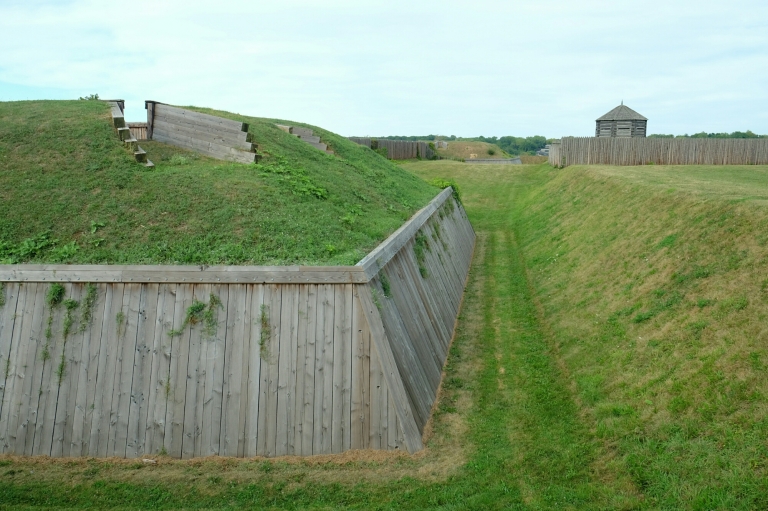 As one who does not usually bother with historical signs, my cycling partners thought I was joking when I first squealed to a halt at a plaque and instructed them to stop and read the information. After a few such stops they understood I was serious and so began elegantly swerving around me and carrying on. For their sake, I digested the information, pedaled hard to catch up and, as we rode, educated them on what they had missed. They feigned a mild interest. As we approached the monument to Sir Isaac Brock, Major-General in charge of the Canadian forces, they reluctantly got off their bikes a safe distance away and seemed amused as they watched me dodge the sprinkler system in the gardens for a good view. Keen to get going, they excused themselves from climbing the steps to the monument claiming to have previously seen it in school text books, which apparently was enough. The plaque for Laura Secord (who secretly informed the British of the US military plans) was given a similar miss. 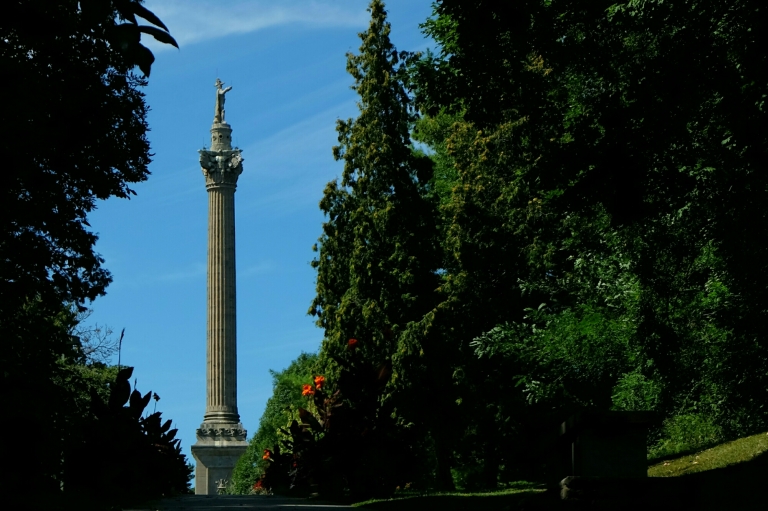 We cycled on through the picturesque, tiny village of Queenston stopping at the house of William Lyon MacKenzie, a journalist/ politician and a central figure in pre-Confederation Canada. 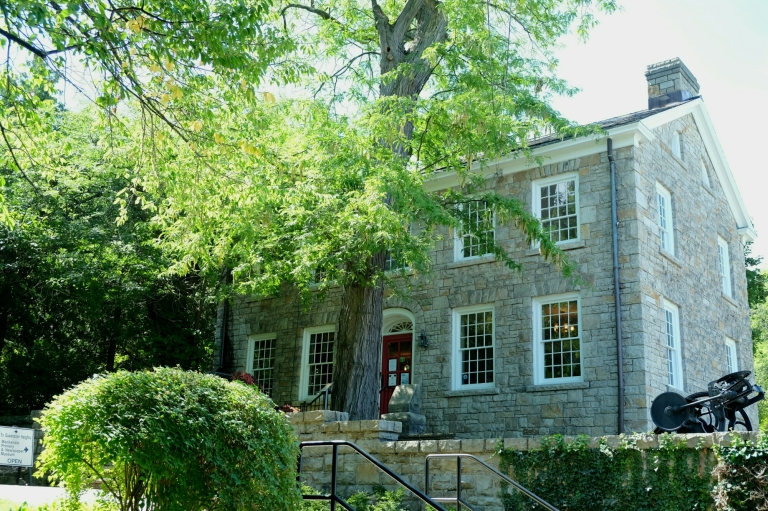 It was here that he published the Colonial Advocate, a radical journal criticizing Lord Simcoe’s aristocratic form of government based on family and patronage and favouring a hierarchical society. He called instead for responsible government. His attacks on the Family Compact, as he called the upper class clique that predominated in the government of the day, as well as his leadership in the 1837 rebellions helped drive political reform and responsible government in Canada. “Should we go inside?” I asked.” Did it in school…when’s lunch?” my companions replied. On to Niagara Falls.

Steadfast in my resolve, I switched to natural history. “It’s Queenston shale that gives the agricultural soils in this region their red colour” I offered. “Oh really?” I was surprised to hear. A step forward I thought, so I quickly followed with “Over 500,000 litres of water per second flows over the American falls and over 2,000,000 litres per second flows over the larger Canadian Horseshoe Falls, providing over a million people with power in the USA and Canada.” “Hey did you watch that guy who walked over it on a tightrope? Wasn’t that incredible?” was the comment. 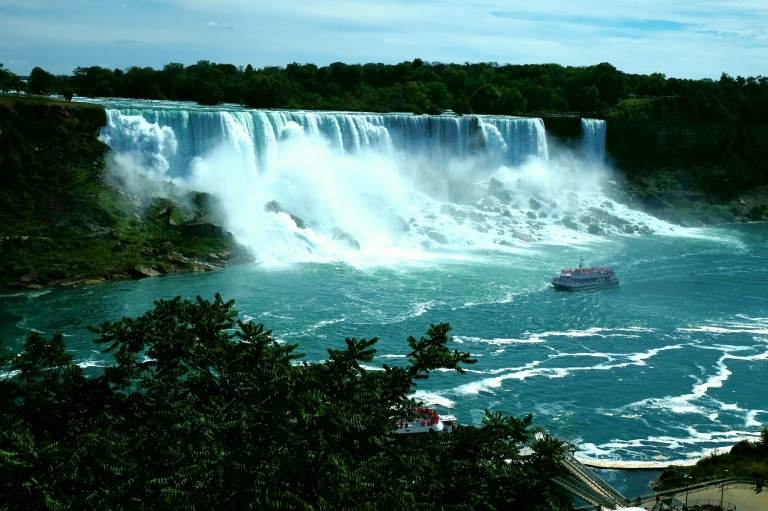 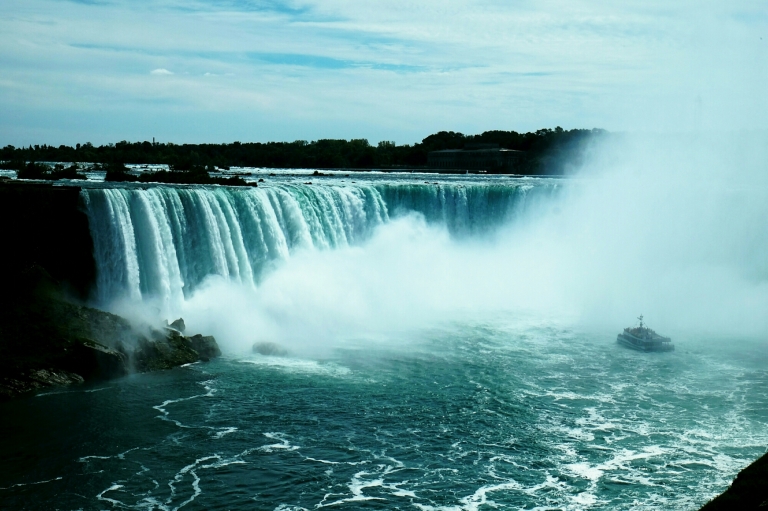 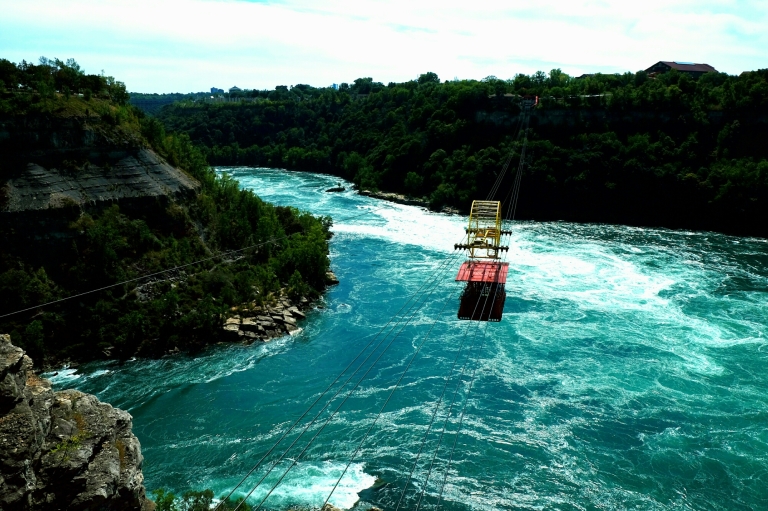 During lunch I took a final swing, explaining that a Treaty between Canada and the USA controls the amount of water that can be diverted for electricity, keeping flow high during tourist season, but greatly reducing the overall erosion of Niagara Falls, which has receded 7 miles since its creation 12,500 years ago. They bobbed and weaved well – “Do you think the fish tacos here will be as good as the ones in Port Carling?” Over lunch we discussed beer, then cycled quietly back to Niagara-on-the-Lake with only one stop at a particular vineyard for my annual ice-wine slushy.

As we sat outside, sipping our alcoholic slushies in the sunshine, I almost blurted out “Did you know that the Shaw Festival was started in the 1960s by a Toronto lawyer who felt Canadians should have a better appreciation for the works of George Bernard Shaw?” I held back though, silently accepting defeat.

You should visit the Niagara region if you haven’t. There is much to see and do (and learn). I’d recommend a trip, sooner rather than later though because at present day rates of erosion the Falls will be gone in 50,000 years. I couldn’t resist a parting shot.

2 thoughts on “Wine, Wars and Water: Why You Should Visit Niagara, Ontario.”