For travelers, the difficulty with seeing Canada is its size.  Each of its diverse landscapes stretches on endlessly making for enormous distances between them.  It is partly this challenge that makes Atlantic Canada seem an attractive quick win.  Indeed, looking at a map of Canada, the provinces of New Brunswick, Nova Scotia, Prince Edward Island and Newfoundland/Labrador look tiny when compared with the remaining six and the three northern territories. Moreover, lumping them together and dubbing them The Maritimes, as we do, reinforces the notion of a compact little road trip that packs in picturesque, colourful fishing villages, windswept, angry coastlines, tired, old mountains, racing, salmon-filled rivers, long, sandy beaches and flat, green pastures.

This past September, I fell into the compact-little-road-trip trap.  I knew better; I had been to the east coast before.  I have only my impulsive nature to blame.  My son was stopping in Ontario en route from British Columbia to Germany, my youngest daughter was in that nerve-racking, empty space between a summer job in Alberta/Saskatchewan and (hopefully) a career job in who-knows-where, and I was unpacking with my left hand from a canoe trip in northern Ontario and repacking with my right hand for six weeks of travel in Europe.

We could squeeze in 9 days together, a rare opportunity these days.  So why sit at home? I could show them Canada’s tiny provinces and even manage Quebec City and the north shore of the St. Lawrence River. Who was I kidding?

My pre-trip plan was sketchy: fuel up car, check oil, drive east from Ontario.  The first wrinkle came when they suggested we drive in shifts.  This wasn’t in my plan.  Neither of them owns a car and my son had spent most of his youth skateboarding and most of his post-uni time at one with nature in the forest.  Making matters worse, after being hardwired many years ago to be a parent, I doubted I could be easily reconfigured into a relaxed, carefree travel companion that sits placidly in the passenger seat soaking in the scenery.  Swallowing hard, though, I nodded and so it was that we set out the next afternoon.

My son took the third shift at the wheel, putting him on a traffic-choked major highway in the dark, in a construction zone, in Montreal.  With the guard rail kissing the edge of our lane on one side and an 18-wheel transport truck keeping pace on the other, it was not an ideal time for him to announce his unfamiliarity with my car (specifically where the sides actually were in relation to the road) or his concern that he may need glasses, especially at night.  I clutched the seat, looked down at my phone and focused on finding a hotel.  I was tired when we reached Quebec City; in my mind I had driven the entire 9 hours.  The morning was sunny and warm though, and after a hearty breakfast we paid homage to Samuel de Champlain, the French explorer and founding father of Quebec City in 1608, and we wandered through the lovely old walled city.

The second wrinkle in our trip, turned into a bit of a blessing.  Most campgrounds and holiday cottages had closed for the season.  This meant much of my non-driving time was spent looking not at the road but at my phone for inexpensive places to stay and then navigating to get us there.  After visiting Sainte-Anne-de-Beaupré and hiking the nearby gorge, traveling through the Laurentians along the north shore of the St. Lawrence River, ferrying over the Saguenay River and arriving in the small town of Tadoussac, we found the guest houses full and all but one camp ground near the coastal sand dunes closed. But the evening was lovely so we climbed the dunes until dark, then lit a fire and cooked dinner.

In the morning we waited with another car for the ferry across the St. Lawrence River from Forestville to Rimouski.  And we waited. There wasn’t a ferry as we learned from Google; it had also closed for the season. This meant either driving on to Baie Comeau another hour east (but the river widened and the crossing became 2 1/2 hours instead of 1 hour) or driving 30 min back to Escoumins and crossing to Trois Pistoles.  We chose the latter but had little time, the ferry was on its way….I’d better drive…how convenient.

On the other side we drove and drove and drove and made it to the middle of our first little province – New Brunswick. The American google-maps navigating lady on our phone, who couldn’t pronounce the French place names or compass directions, became a source of amusement and we argued over whether to switch to the British lady, not sure if she could do better, or continue to laugh at the American lady. We were getting punchy.

On day four we reached the Bay of Fundy. Its tidal swing of 15 m (50 ft) is the largest in the world, five times larger than typical tides and emptying a billion litres of water in each cycle.

After a stone skipping contest that we each claimed to have won, we visited the Hopewell Rocks. The carved, red sandstone and red mud flats and bay were striking at low tide.

We pushed on to Nova Scotia, another long drive. My daughter complained that these little provinces were bigger than they should be. My son turned on podcasts and looked more at his phone than out the window.  As the sun set, we reached the Head of Jeddore, found a cozy cottage on the ocean, cooked dinner and decided to slow down. On the following day we spent time walking in Halifax, Peggy’s Cove and Mahone Bay arriving finally Lunenburg.  Then wrinkle number three came along.

My son informed me that he needed reliable Wi-Fi, at a specific time and for many hours. He had committed to a fantasy hockey league pool and had to build his team through a live, round-robin draft that began on-line at 6 pm west coast time.  We were 4 hours ahead on the east coast.  A campground wouldn’t do.

By dinnertime, I had found a little cottage on the ocean.  We dumped my son who apparently also had to do on-line “background research” prior to the draft. Whatever. My daughter and I headed into Lunenburg. That night, while we slept, my son drafted hockey players until 3 am and watched the entire lunar eclipse. In the morning, once packed and ready to leave, he opened one eye and we rolled him into the back of the car.  No problem, more driving for me…on to Cape Breton.  Somewhere near Baddeck he woke up for lunch, then slept on through to Ingonish and the national park where we stopped to camp and do a pre-dinner hike. 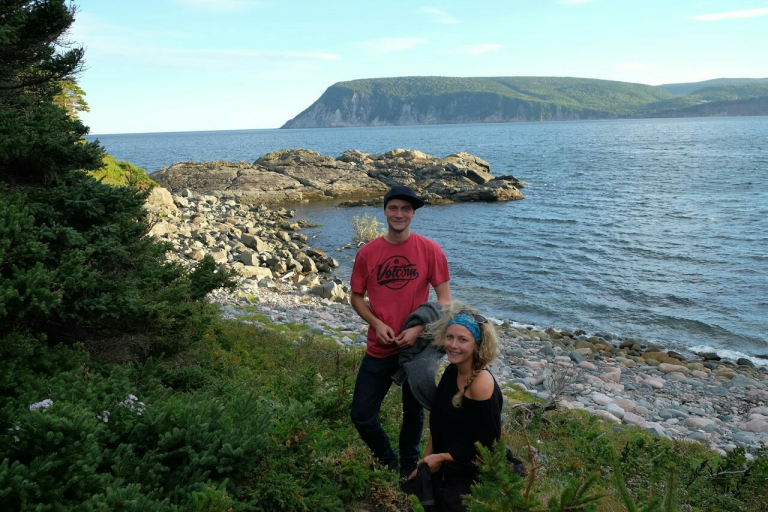 Cooking in the dark once more,  the wind picked up making it difficult to keep the fire going. It was severe that night but the tents held strong and the next morning was beautiful so we went exploring.

The waterfall was lovely.  They decided to climb it.   I took a picture then gently put down my camera.

Not one to be left behind, I followed, and then came the last wrinkle.  In mid-climb I caught my foot underneath me and as I tried to turn around, I tumbled down into the pool of water at the bottom of the waterfall and twisted my foot.  My son leapt to the rescue, my daughter laughed, I cursed.

Dripping wet I hobbled to the car, concerned mostly that I might not be able to cycle in Albania in a week’s time.  I reckoned keeping it moving was the answer and so changed clothes and we immediately went on a 7 km hike through the tundra-like plateau at the top of the highlands. The views were lovely but by the end my foot was swollen and sore and I was limping. With the winding road ahead and me unable to press the clutch I now had no choice but to be the passenger. Ugh. 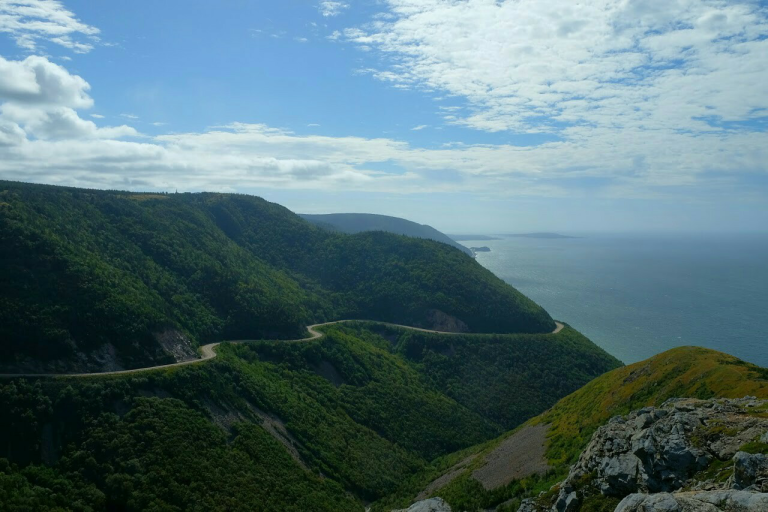 What’s more, our time was running out.  Prince Edward Island would need at least another day and Newfoundland was definitely too far away.  So we began the journey home, this time along the south shore of the St. Lawrence to Montreal.  After an evening of ice, my foot made a miraculous recovery.

I love the east coast and it was a good trip.  But if you go, remember: