Just before I left for Zakynthos, Greece, a conversation with someone who knows me quite well went something like this:
“How far do you expect to go each day?”
“Oh, about 9 or 10 miles I think”
“That isn’t much”
“I’m walking not cycling”
“What? I didn’t know you were a walker”
“I’m not”

It’s true. My only other walking holiday was in Devon/Cornwall last spring. Many of my vacations have focused on cycling. Walking always seemed too slow for my can’t-sit-still personality and I knew I wouldn’t be able to see as much. But Zakynthos is a beautiful island for walking, especially in May when the spring flowers are in bloom and when led by someone who knows hidden, unmarked trails used largely by goats.

Getting there proved interesting. Sitting at the gate in Gatwick airport, I found myself surrounded by good-looking young men heading to Greece for a stag party. “Don’t worry, we’ll look after you” they joked. Once on board, however, as the champagne began to flow, they seemed hard-pressed to even look after themselves. I was seated immediately behind six very large men traveling together. They sat three abreast on either side of the aisle and only just managed to fit into their seats. Clearly not wanting to remain squashed against one another like marshmallows on a stick ready to be toasted, they instead stood in the aisle for much of the flight. Although they switched places every 30 minutes or so, there always seemed to be a large, jiggling belly looming over me. Sinking lower into my aisle seat, at one point I was forced to push the tummy out of my way to avoid suffocation. He apologised and turned around. This made things worse; I felt lucky to arrive alive. 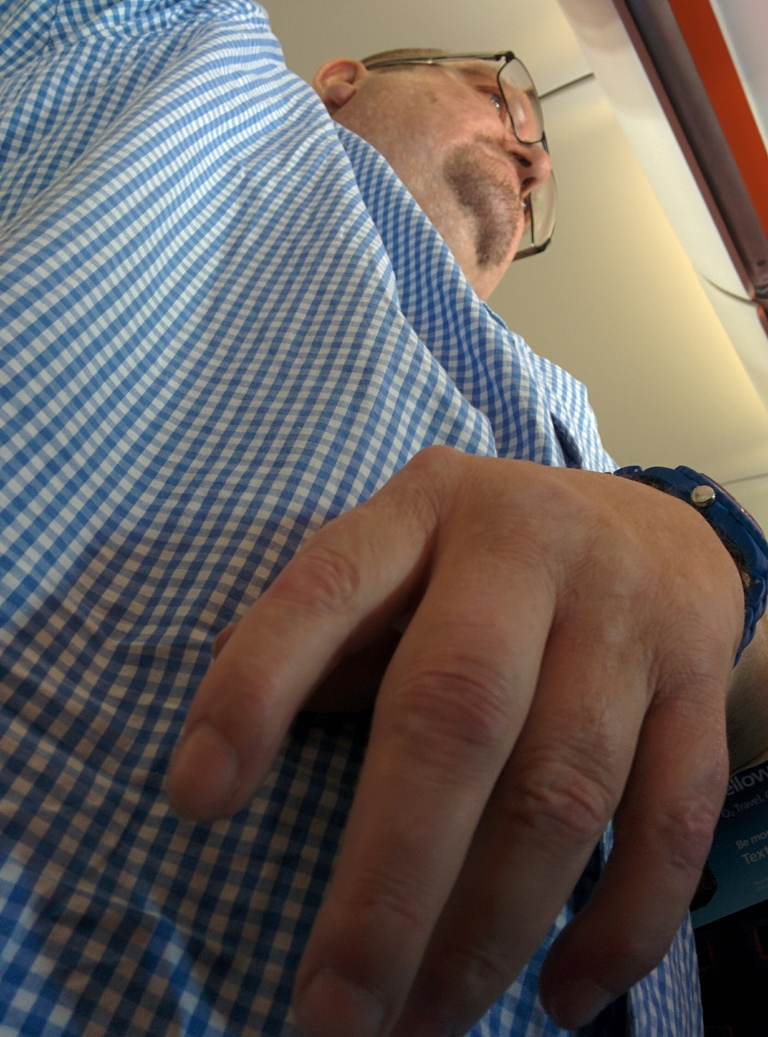 The trip was organised by the same lovely couple that introduced me to my first group walk in Devon/Cornwall last spring.

Two walkers I had met on that trip became friends and when I heard they were going, I signed up as well. Walkers are talkers, I found out on my last trip. For me, this took some getting used to. Group cycling has more of a solo feel to it because chatting all day as you cycle is impossible. Not only is cycling in single file safer, in my case, surviving the hill climbs consumes most of my attention. But I do feel well-exercised by the end of a day. Walkers, on the other hand, are quite happy to amble along talking endlessly to one another, which makes me appear a bit antisocial as I march onward maintaining a pace. There were a few quiet ones though. The man who walked like a duck and his wife who never smiled both said little, even to each other, and there was a quiet woman who seemed deep in thought on most of the walks. I was happy though to see my friends, to listen to the anecdotes from their interesting lives and to make new acquaintances.

The Greek island of Zakynthos or Zante (its name of Venetian origin) is the third largest of the Ionian islands. Its landscapes vary from striking limestone coastlines and rich, agricultural plains to scrubby, craggy mountainous terrain.

Its ancient history is Greek and Homer refers to it briefly in the Iliad and the Odyssey but Venetian rule comprised much of its middle age history through to the late 1700s. Then the French and the British each held it for a short period until it was reunited with Greece in 1864.  The second world war brought Nazi occupation and the building of caves in the limestone hills to store arms and supplies.  In 1953, a major earthquake destroyed most of the island as well as the nearby island of Kefalonia, and today most of its historical buildings have been rebuilt and/or restored.

The walks were lovely. The first one took us from Alikanas on the east coast to the area of Messo Gerakari and Ano Gerakari on top of the hill at 186 m overlooking the agricultural valley to the west. Passing through olive groves and tiny villages, we found a small taverna for a wonderful Mediterranean lunch. The taverna was run by a mad woman with a crochet hook. Crocheted granny squares adorned everything in sight, even the toilet seat lids.

On day two we headed for the hills.

Walking near Loucha and Giri to heights of 650 m, we could see the far reaches of the island before moving down from the scrubby hilltops to gentle pasture lands and villages. 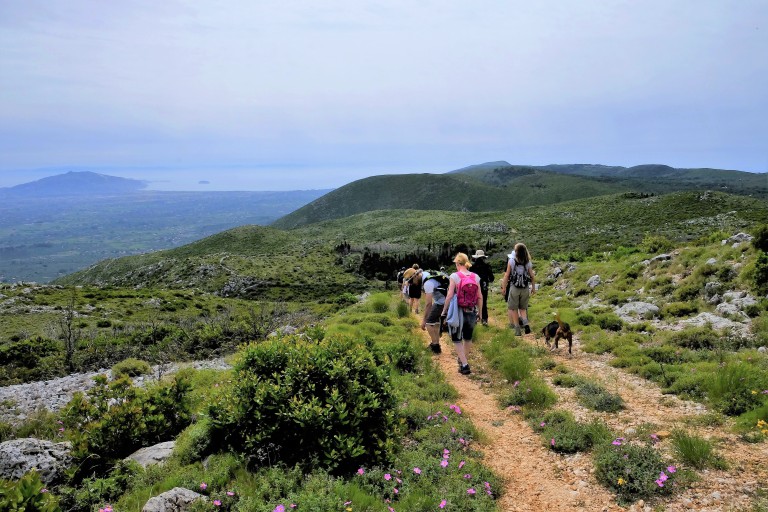 We also explored the southwest tip of the island (Keri to Limni Keriou).  Pretty little towns and spectacular coastal views from the hills make this area special and we had time to visit the town of Limni Keriou itself, a harbour with that familiar taste of tourist tackiness that accompanies so many seaside vacation towns around the world. 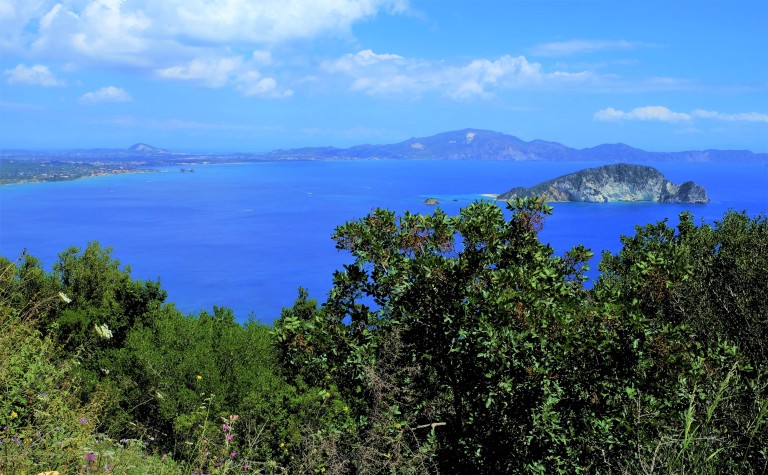 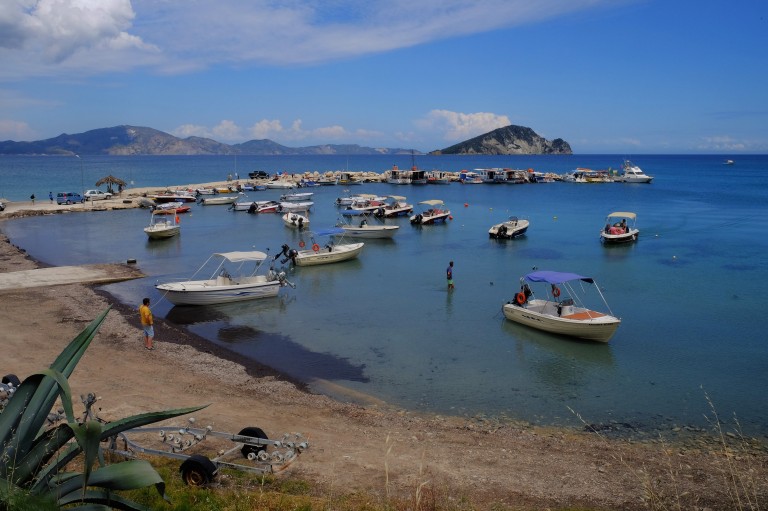 A day poking around the town of Zakynthos allowed us to see the administrative capital of the island on the east coast.  It is a bustling town that has, at its entrance, the graceful and beautiful statue of Eleftheria (Zakynthos’s statue of liberty) and St. Nicholas, a Venetian style church and the only church to survive the 1953 earthquake. It was built in the 17th century by sailors on what was then a small island connected to the mainland by a bridge. With land reclamation many years later it became part of the mainland.

Here we ate street food – gyros and souvlaki. The pork and chicken versions showed up immediately but those who had ordered lamb remained empty-handed for what seemed like ages. The waiter kept advising that the lamb would be ready soon.  Finally, after a very long wait, it became evident that they were happily allowing the customers to order lamb from the menu knowing full well they hadn’t any lamb. When eventually confronted they offered simply “the best we can do is pork” still not acknowledging that, in fact, there was no lamb.

We also spent time in the hills near Ammoudi and at the northern end of the island where even-age stands of regenerating pine near Volimes suggested the area may have been burned in recent history. Finally, after another delicious lunch near Varvara we boarded a boat to visit the Blue Caves near Korithi, caverns carved by the sea deep into the limestone coastline. 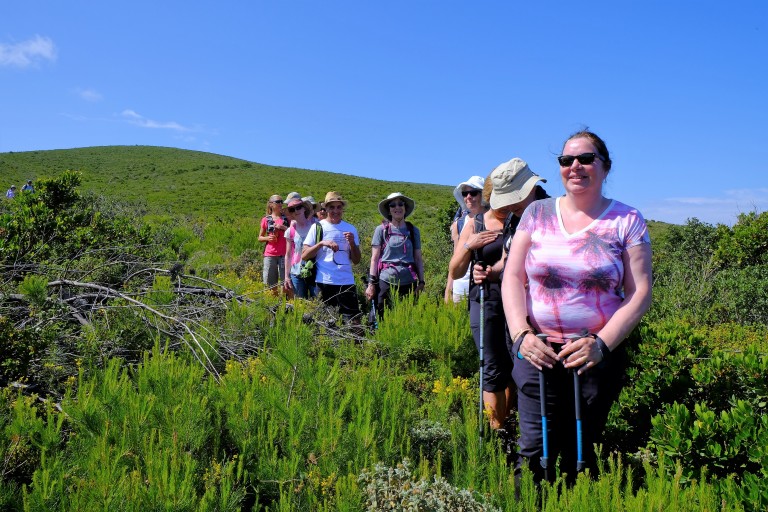 Six days of lovely walks, sunshine, warmth and good company in early May, before the throng of tourists, meant we enjoyed the island to ourselves.  And as one who neither takes selfies nor asks others to take my picture, sometimes it just feels right to remind myself I was there. 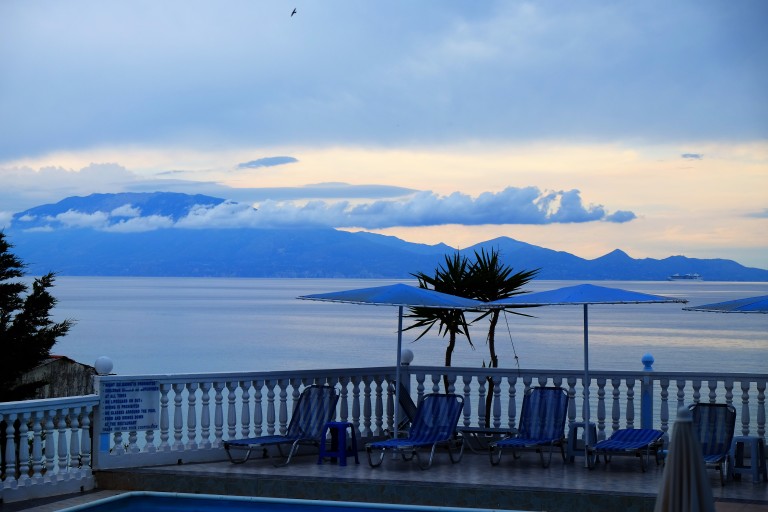