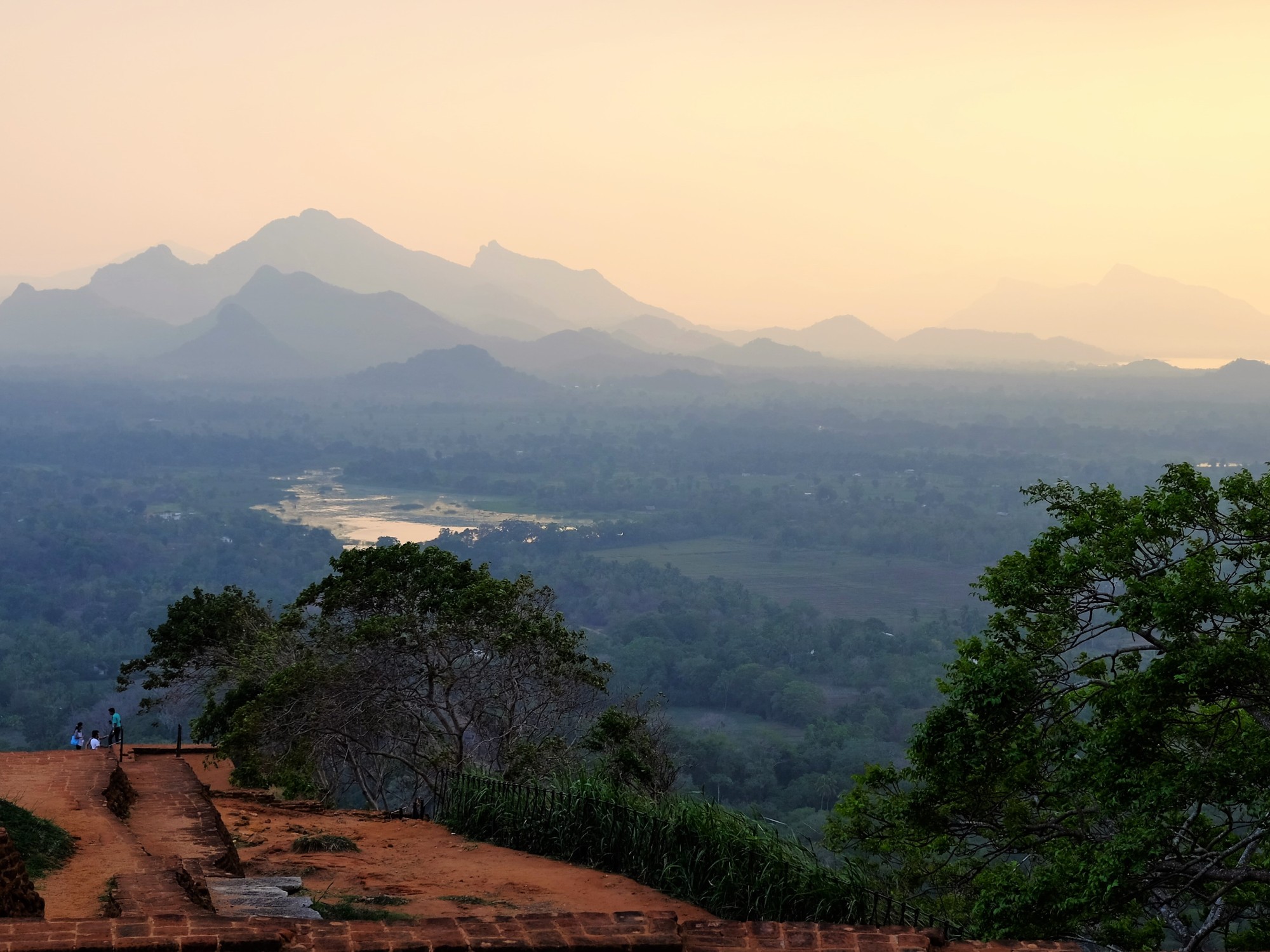 A cycling holiday seemed an ideal way to see the beautiful country of Sri Lanka, to meet its friendly people and explore its small rural villages, jungle nature reserves, parks and bird sanctuaries, spice growing areas, mountainous tea plantations, coastal beaches and rock carved temples.  As charming as it might sound, however, cycling this country is not without its challenges and hazards, so I’ll get these out of the way first. 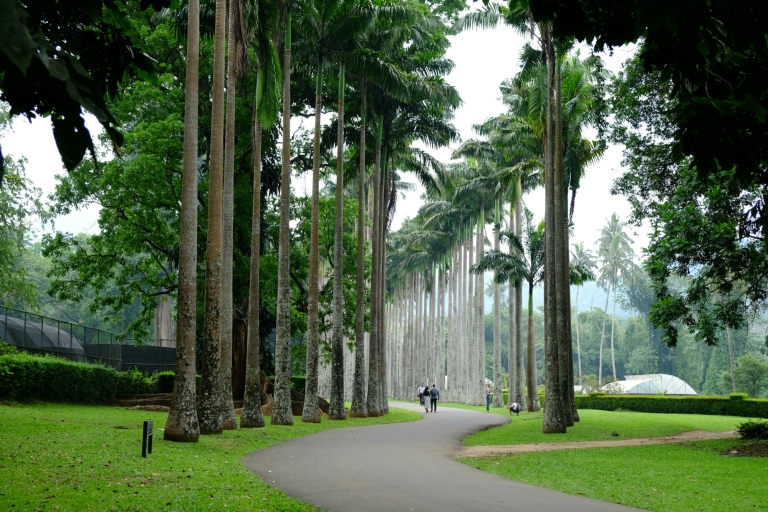 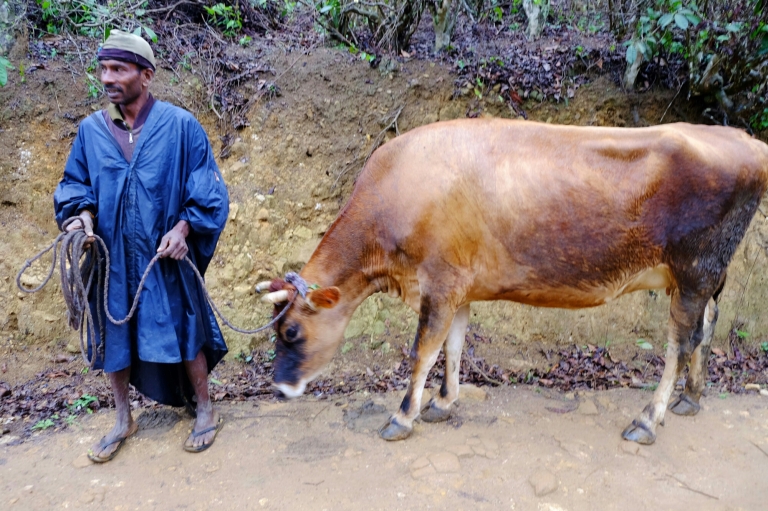 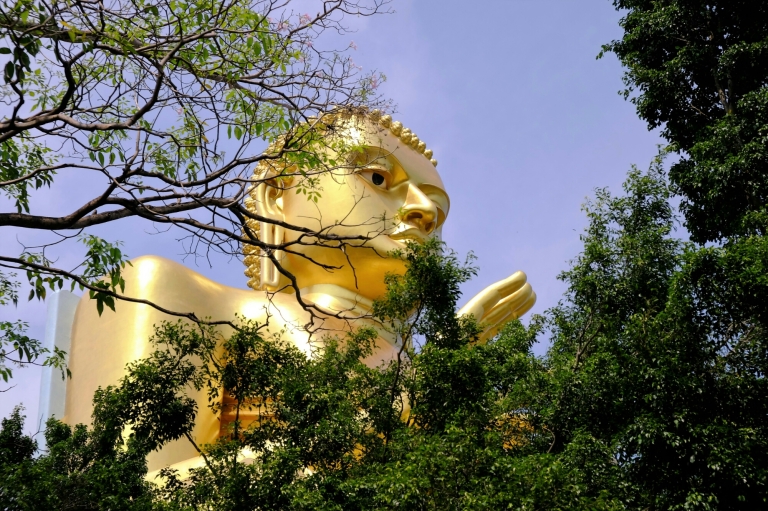 The cycling tour was called Backroads of Sri Lanka. To a naïve Canadian backroads conjures up visions of scenic, empty country roads. How did I neglect to consider that 22 million people squashed into 65,600 square kilometres averages about 335/sq km? That’s about 100 times more than Canada and Sri Lanka’s backroads are anything but quiet. They support a constant throng of large buses (that consume the entire lane), trucks, tuk-tuks, motorcycles and cars, and all the associated engine noise, exhaust fumes, horn-honking and close calls that they bring. Cycling on even busier major roads was also necessary. A long, hot slog along one of these with traffic whizzing past was not particularly enjoyable.

This was a cycle-from-hotel-to-hotel tour, meaning no bus transfers, so we had to navigate heaving towns and cities in the mornings and afternoons while inhaling unhealthy doses of nitrogen oxides, volatile organic compounds and respirable particulate with each diesel fuel-infused breath and with inches to spare between pedestrians, cyclists and vehicles. 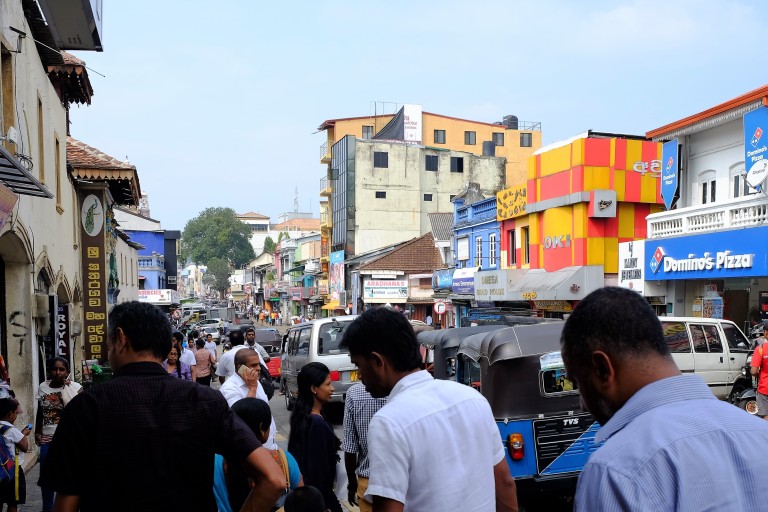 The condition of the roads on this tour were described as 95% tarmac and 5% unsurfaced. Excellent, I thought, but it turns out that a road appears to qualify as “tarmac” if an attempt has been made (no matter how feeble) to tar some portion of the road within the past 50 years. The fact that much of the tarmac is broken, with some bits not paved at all, or that it consists of kilometres of crater-sized potholes appears immaterial.

Then there were the dogs. Hundreds of them, everywhere, some sort of beagley-terrier-mix looking thing. They sleep on the roads in the path of cyclists. 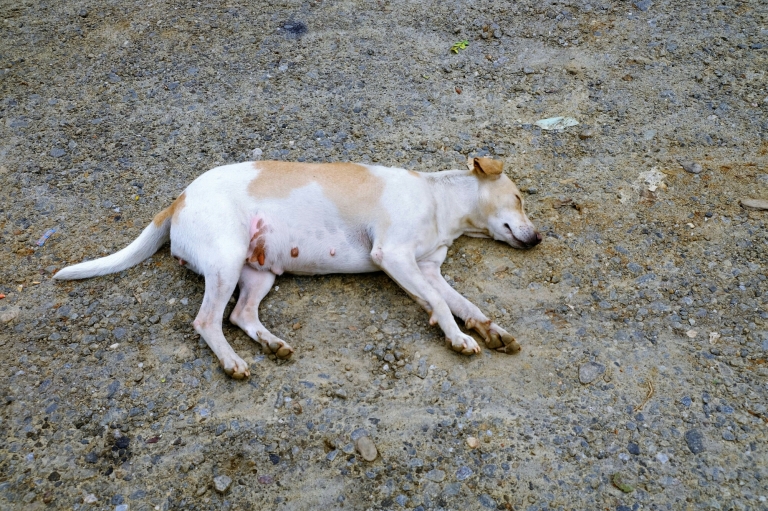 They don’t wake up as you approach (I wonder if they are alive?) and you must swerve to avoid them.  There are an estimated 3 million stray dogs in Sri Lanka and I think they are used as speed bumps. Although tempted, I didn’t actually run over one to see how effective they are. The speed bumps that aren’t sleeping chase your bike and bark ferociously at you, which I found even more unnerving than the traffic.

The interior of the island is mountainous, the climbs were long and steep, especially in the 33°C heat and humidity, and the group was fast. It made me wish I had taken time to train in Canada’s hot, humid summer this year instead of spending my time in a kayak. 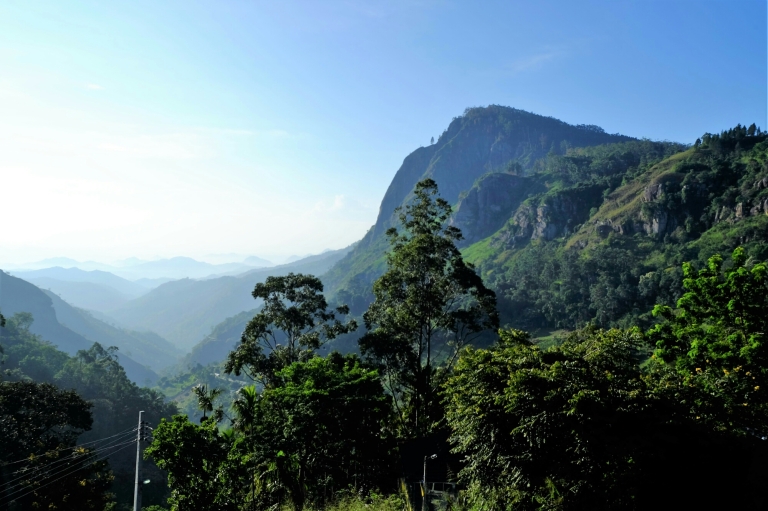 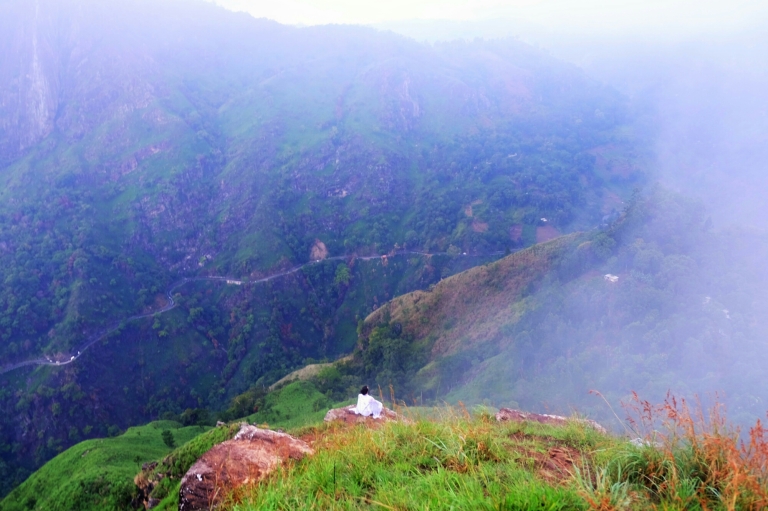 We were also warned, on numerous occasions, of the hazards of living in the jungle. We cycled through a nature reserve one day and took a Jeep safari through Yala National Park in the second week. 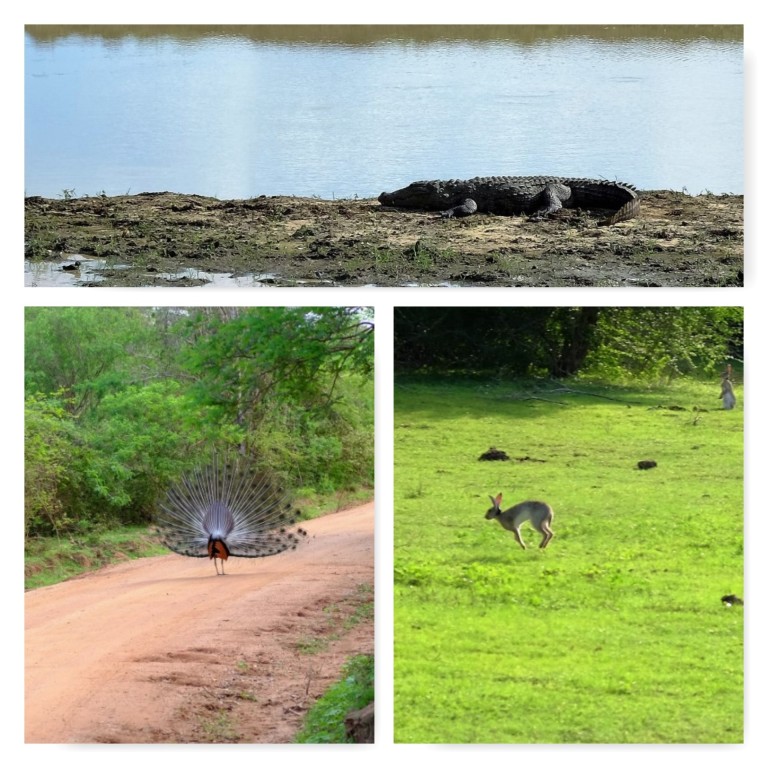 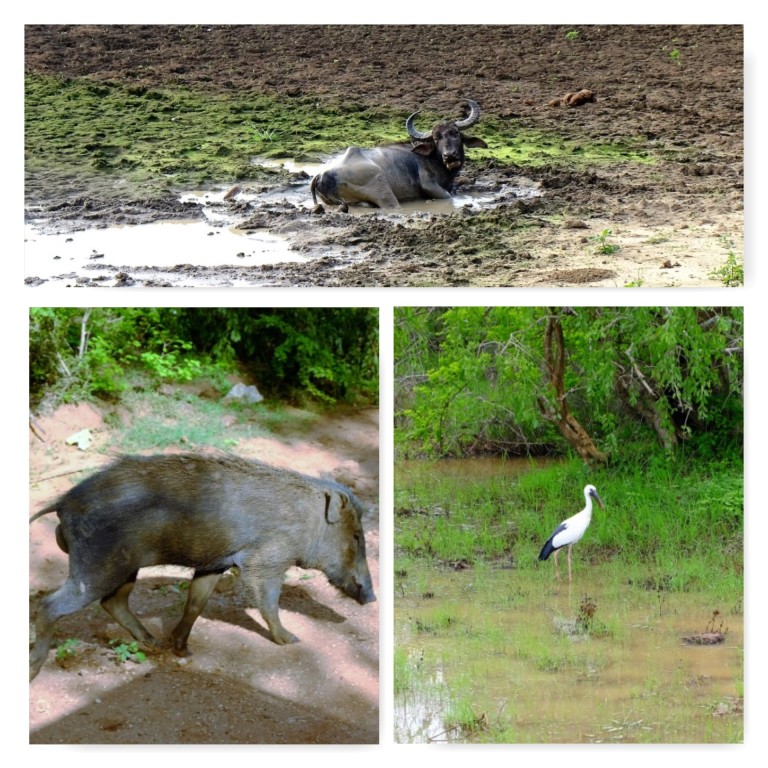 We were told not to walk the roads near the hotel at night because an elephant might squash us dead with its foot, as apparently happened to a young nurse making her way to work at 5 am one morning. We also met a local woman who had experienced an elephant break and enter while at home one night. They were looking for food. Another reason to be fit enough to stay with the peloton. 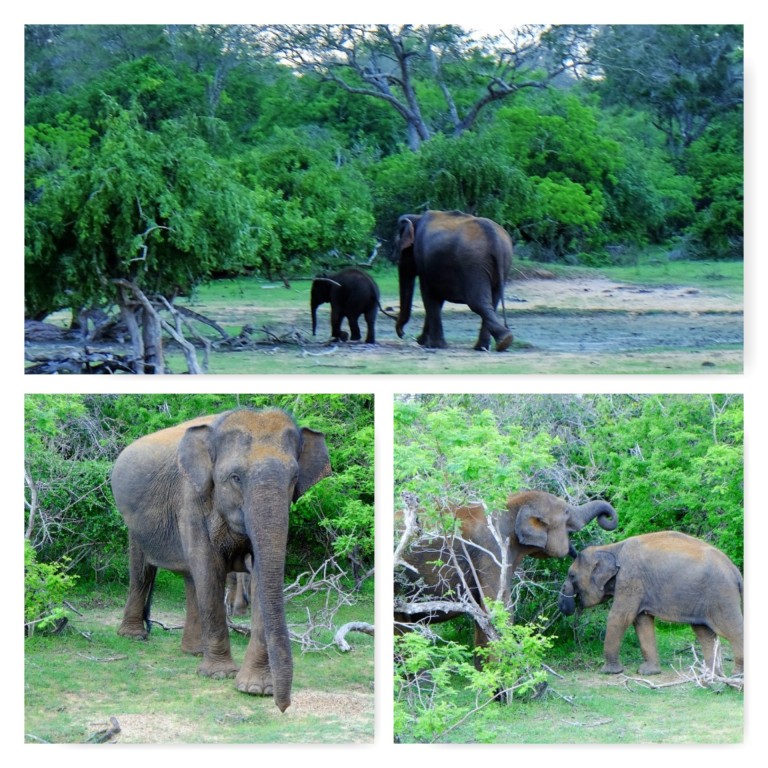 Finally, there are monkeys that steal your stuff. One pick-pocketed one of our cyclists while climbing Sigiriya rock, and our guide told us of a previous trip on which a monkey grabbed his phone and ran up a tree. His friend called the phone and luckily the monkey dropped it when it began to ring. 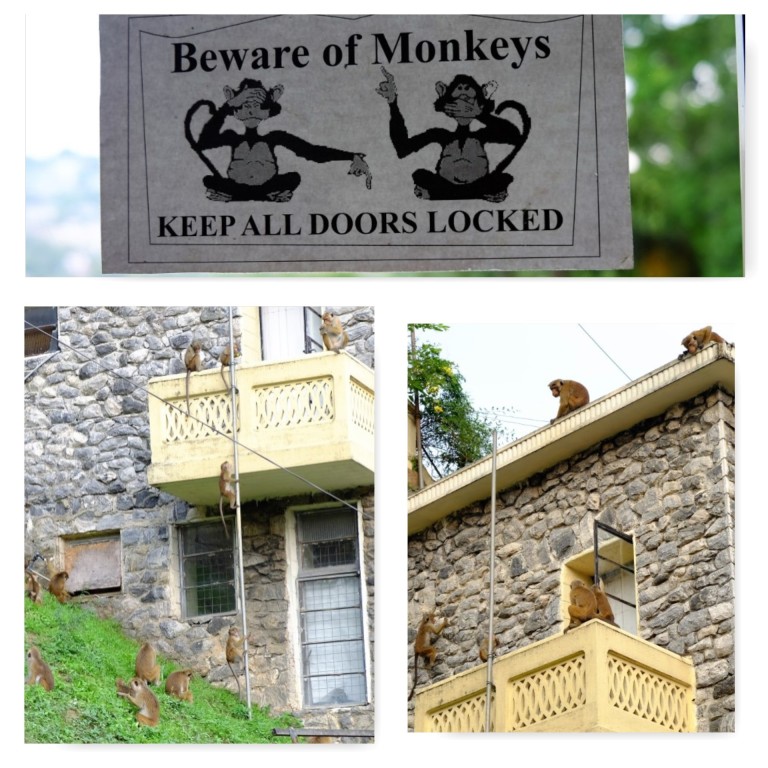 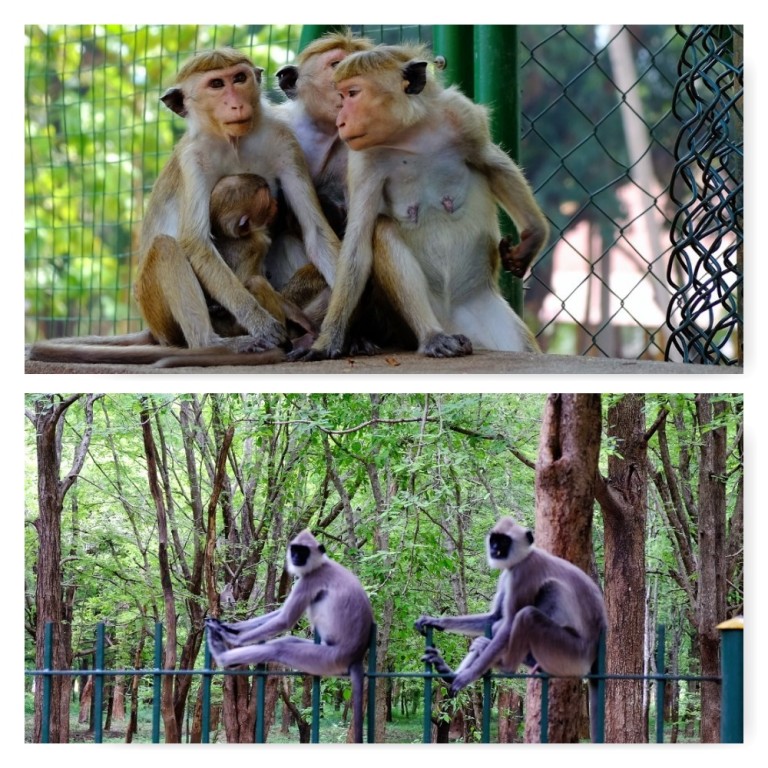 I’d do the trip again in a heartbeat though and here’s why.  It began in Sigiriya in the middle of the island. We spent two days cycling reasonably quiet gravel roads near Dambula to see temples, climbing Sigiriya rock and visiting the ruins of the royal palace near Polonnaruwa. 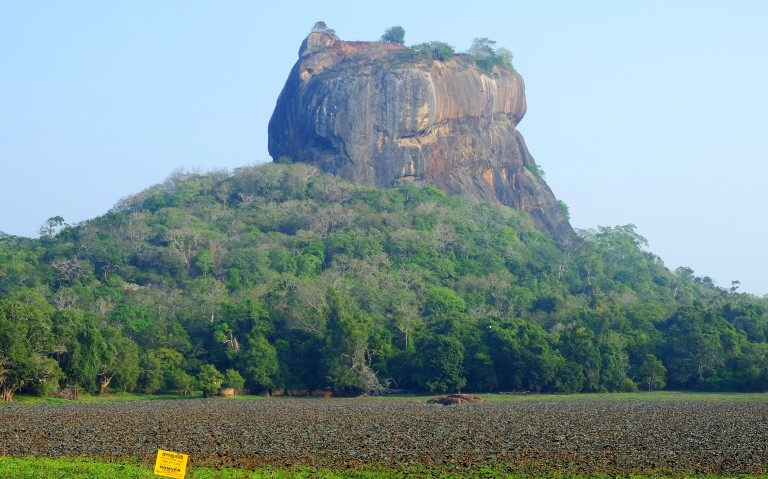 This is where I got my first glimpse of a buff Buddha. Sri Lanka has a form of Buddhism (Therevada) that is older than the Mahayana Buddhism found in Asia and they have the fittest looking Buddha I have ever seen. Much more pleasing than the fat-bellied one I am used to. 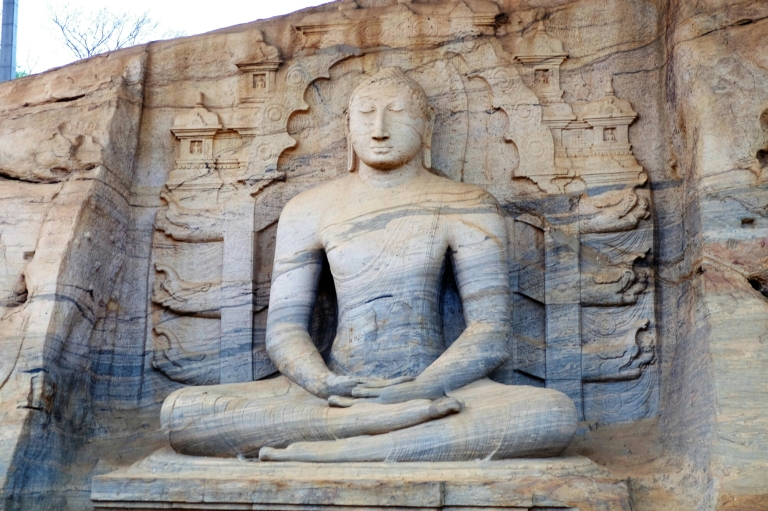 We had a hard day of cycling, climbing 5000 ft over 82 km to the highest point in Sri Lanka, at 8280 ft asl, staying at Nuwara Eliya. Here, evidence of Sri Lanka’s British colonial past in Ceylon, was noticeable. We stayed at the beautiful, British-built Victorian Hill club. One of the dining rooms is reserved for the “properly” dressed guests and so our sweaty group were quickly escorted to the “other” dining room.

This high altitude area is beautiful and covered in tea plantations. We saw the tea leaves being picked, dried, rolled, cut and sieved to make black tea. 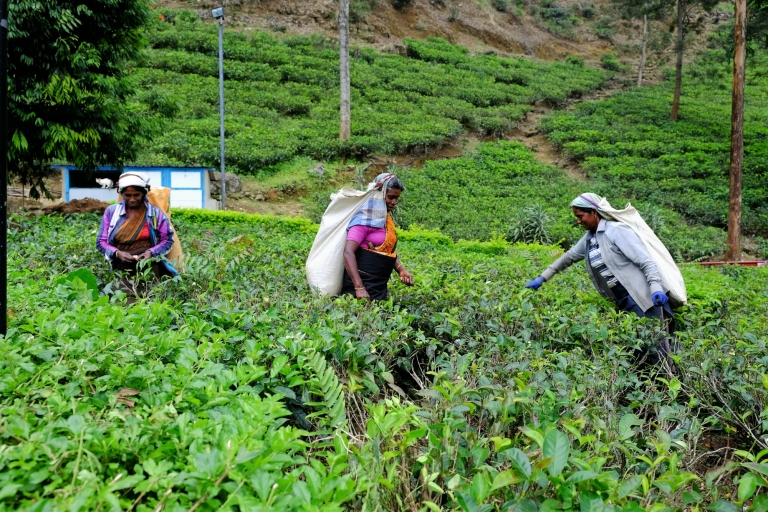 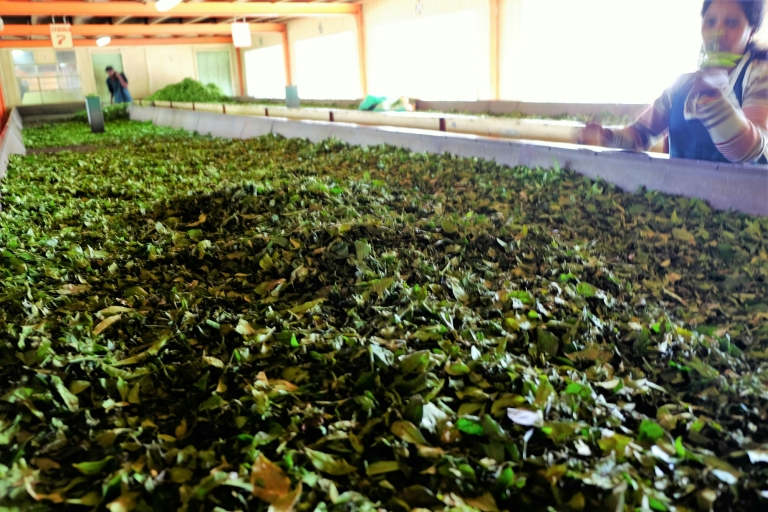 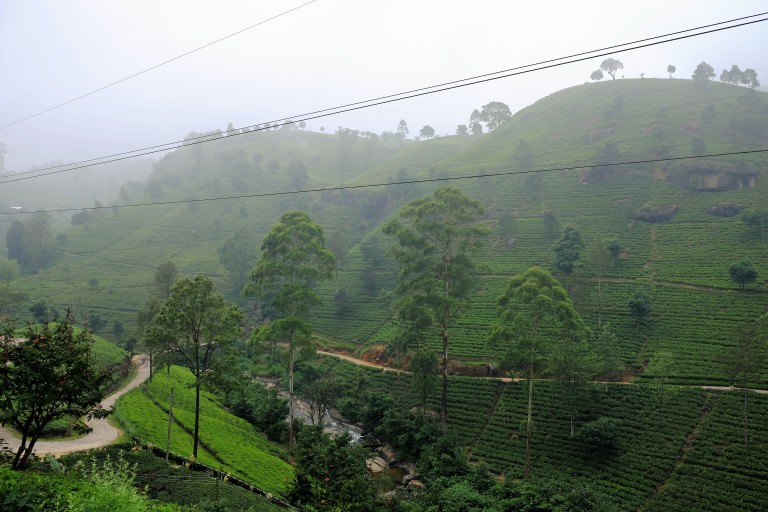 Then it was an exhilarating 22 km downhill towards the coast to the town of Ella and then a long, flat coastal plain slog to Tessamaharama. 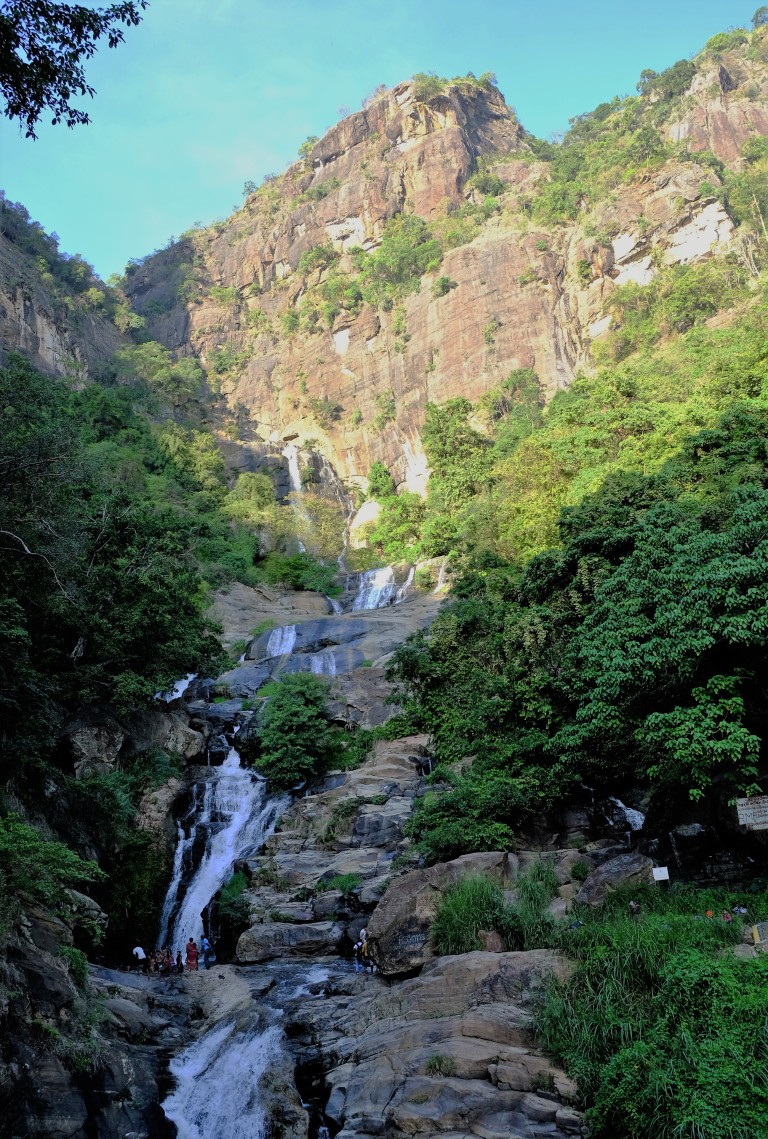 Our reward was a beautiful seaside hotel and the Indian ocean (the warmest ocean swim I’ve ever had). A short cycle to Galle (on genuinely quiet backroads) took us to fish markets, surfing beaches and a lake with WWII Japanese planes on the lake bottom. The lake had been covered in water lilies during the war, at a thickness to make it appear as a green field from the air and a suitable air strip for landing. We swam and watched stilt fishermen and whales, a relaxing end to two weeks of cycling. 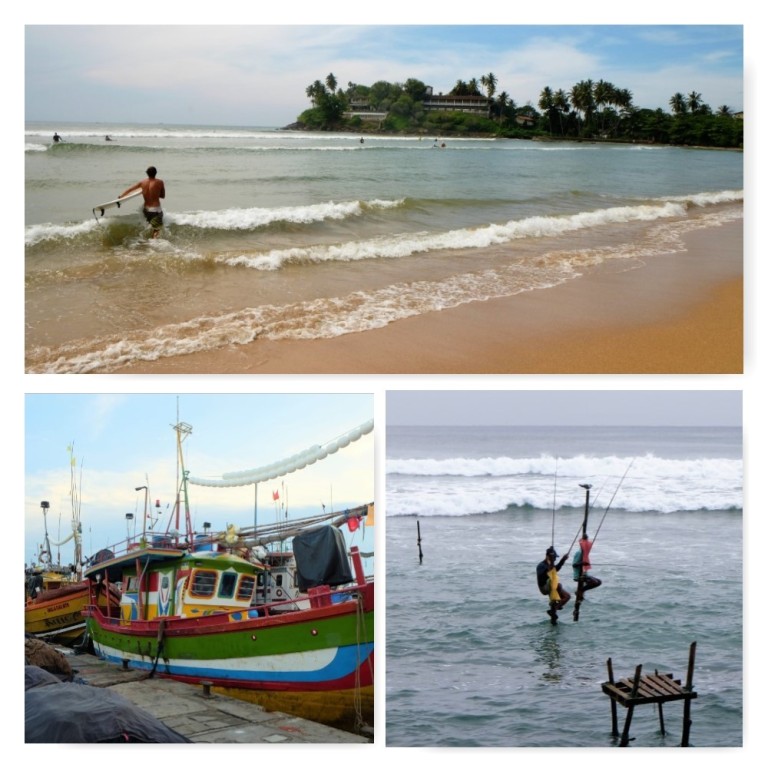 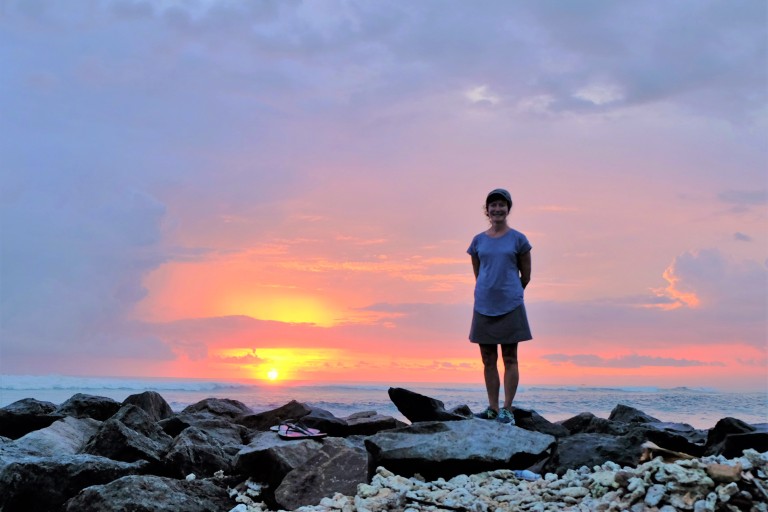 I loved it despite the challenges of cycling in this country but it was not without incident. I fell off my bike twice. Once on a gravel road when the two people ahead of me were talking and rode into one another. Not able to avoid them I went down too. The second time, the girl behind me exclaimed that the guide at the back of the group had just been hit by a truck. I rapidly turned to look, rode into the curb and was thrown off my bike over the sidewalk and into the gutter (totally my own fault). In fact, the guide had simply fallen off his bike while trying to take a selfie; there was no truck involved. Then there was Nick from Australia who slid out on a gravel stretch, cutting his leg which later became badly infected and required a doctor, Mark from the UK who, three times, forgot to unclip his cleats and toppled over sideways into the bushes and Moira who was cycling uphill around a sharp corner when a passing bus brushed up against her, bruising her arm . The first-aid kit was well used! 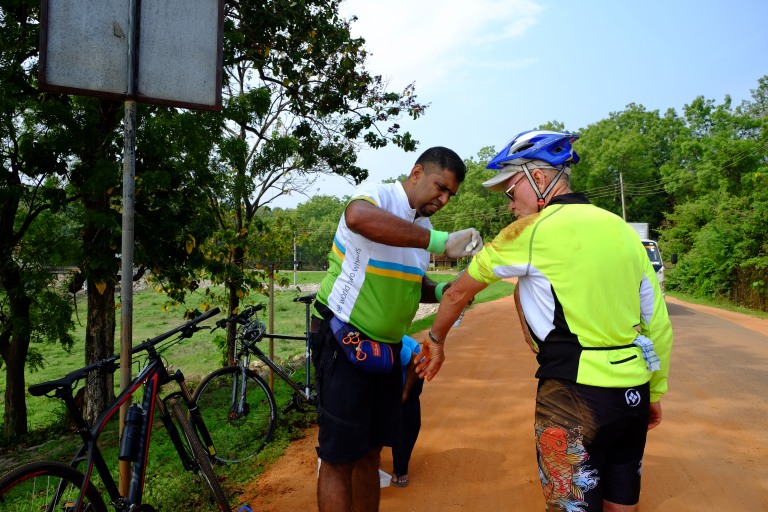 The group was great fun, the guide was excellent, the scenery spectacular and the country full of warm and friendly people, especially the children with their beautiful white smiles, who waved and shouted hello as we passed. One teacher even arranged her children for a photo when she saw me take out my camera. 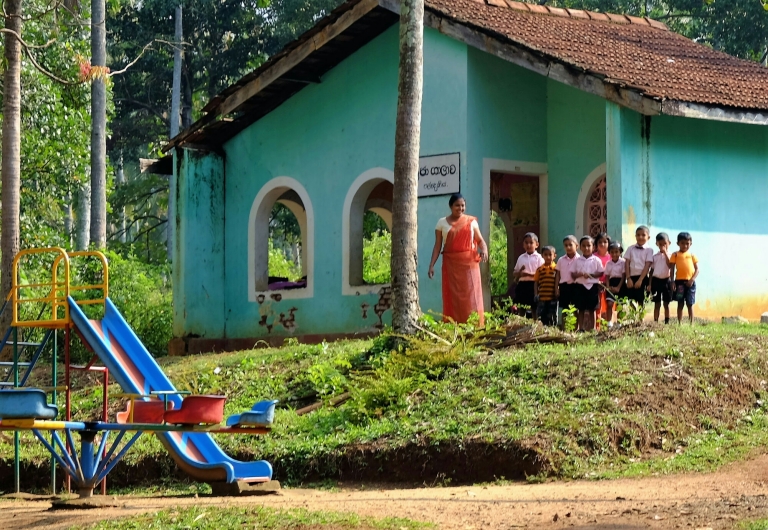 What better encouragement is there to overcome the challenges of the ride than children happy to see you, shouting and cheering you on and holding out their hands to touch you as you pass. I felt like I was in the Tour de France…well, sort of…. you know, near the end of the race, when there are still a few spectators kind enough to remain and cheer for the losers. 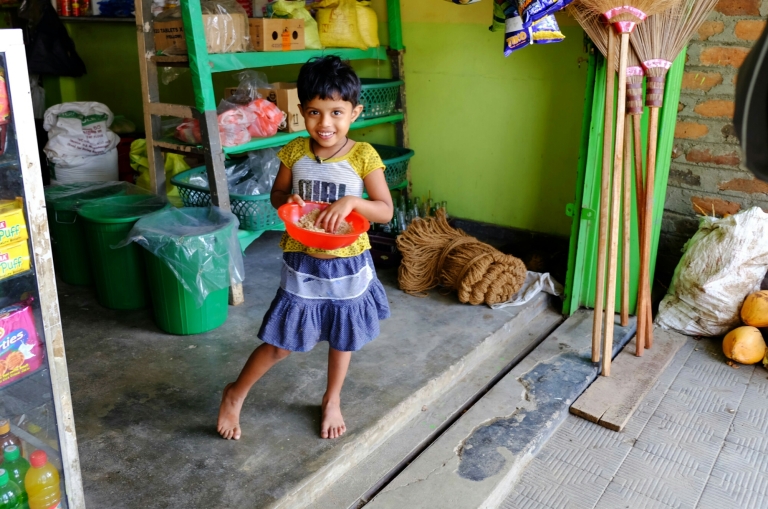 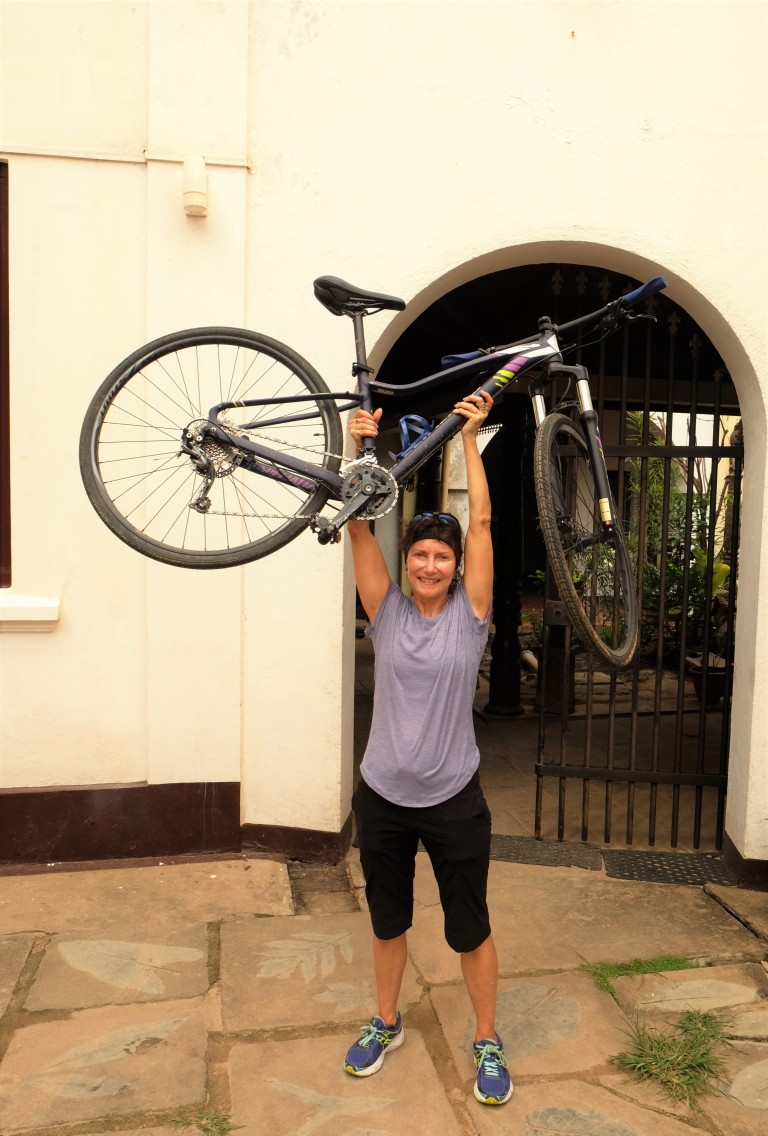 5 thoughts on “Backroads of Sri Lanka”