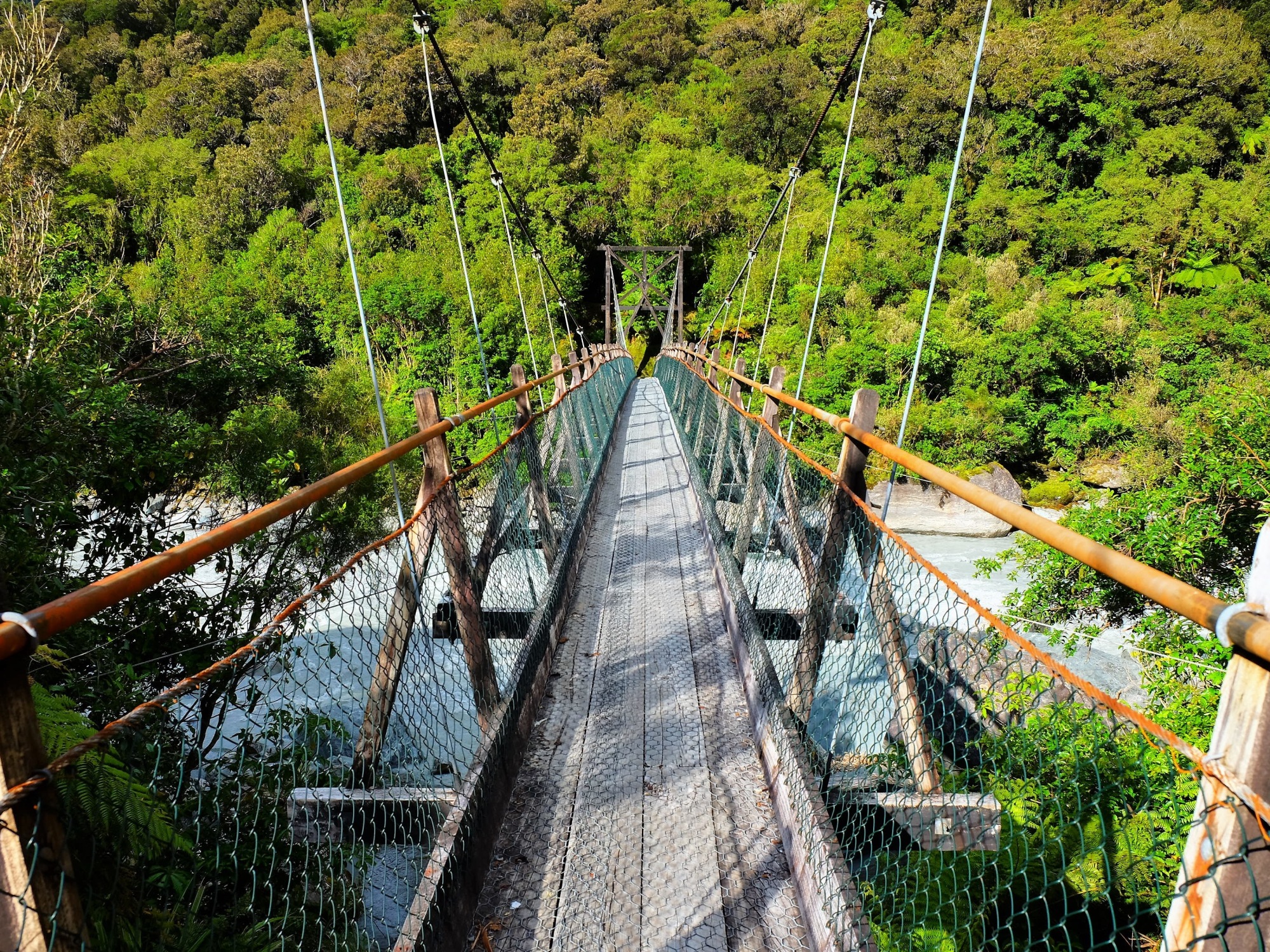 When the email arrived in late October, the day before I left Canada, telling me my December kayak/hiking trip from Christchurch to Queenstown had been cancelled due to lack of interest, I was puzzled and annoyed. It seemed an ideal way to see New Zealand’s wild, west coast. In late October, the website listed the trip as “guaranteed” (only to attract interest apparently). I booked flights based on this. Scrambling, I found a cycling holiday with the same dates and covering the same route but in reverse. I booked it, forgot about it and flew off, shooting through London and David Bowie’s art collection at Sotheby’s, cycling in the thick heat of Sri Lanka, marveling at the dozens of beaches in Sydney, Australia and briefly attempting to surf. I was feeling good.

Arriving in Queenstown in early December, I rushed out to admire the town instead of sitting down to read the trip notes. Situated on Lake Wakatipu and surrounded by the Remarkables, a mountain range with a ski field (as New Zealanders call them) of the same name, Queenstown is New Zealand’s winter and summer playground.

Lake Wakatipu is shaped like a lightning bolt, crystal clear and averages 320m deep. Although 10° C all year round, it doesn’t deter water sports and the surrounding mountains offer some of the best skiing in the Southern Alps.

As the next day dawned, it dawned on me that I might have to cycle through these mountains to get to the west coast. I was the cycling guide’s first pick-up. Mild panic set in as we collected the others. They were young, fit and many had brought their own expensive, light-weight road bikes. I had signed up for a road bike tour with a group of hard-core cyclists, including an Australian man who competed in bike track races! They’d come to climb the Crown Range. Gulp. I should have done my homework.

It didn’t help that I was the only one that would have to ride a tour-company-supplied heavy, hybrid bike with a nerdy-looking carrier rack and a big, wide uncomfortable seat, the heaviest bike I’ve ridden on a cycling holiday. By the end though I had to admit that it did help me climb the hills.

Luckily, there were two “road-bikey” girls from Singapore who rode slowly as well (it must be flat in Singapore). We reached the bottom of the Crown Range by mid-morning on the first day. Two of the hard-core cyclists got in the van and so did the girls from Singapore. Not wanting to outdo them (as if…) I hopped in the van too 🙂 and skipped the 8 km climb. Does riding down the other side and on to Wanaka allow one to claim to have “done” the Crown Range? Probably not. “If the group hadn’t been in such a rush I would have tried it” I said confidently from the comfort of the van.

Over the next 5 days, the beauty of New Zealand’s west coast and the more reasonable pace of the Singapore duo made me forget the roadies at the front and enjoy the trip, despite the fact that I spent much of the rest of it wet.

The next day we rode to Haast in the rain. Riding with foggy sunglasses and squishy shoes is right up there with long climbs in terms of discomfort (why is it that I bother to ride a bike, I wondered). But the rainforests (that well earn their name) glistened in the rain, the air smelled fresh and the picturesque waterfalls along the roadside offset the misery.

We made the most of the dry bits for the rest of the trip because aside from one warm, sunny day, much of it was cold, windy and wet.

Luckily, our first glimpse of the Tasman coast was in the sunshine as we rode to Ship Creek and on to Bruce Bay.

We had a picnic lunch at Lake Peringa and a BBQ dinner at Fox Glacier. This was traveling by bike at its best. 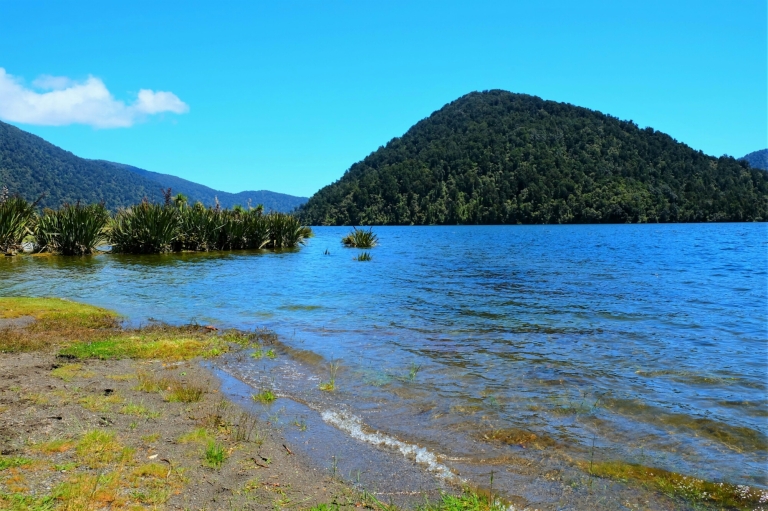 We walked to the receding Fox glacier and around Lake Matheson from where Mount Cook and Mount Tasman were visible and spent a day at Hokitika, a holiday town on the Tasman coast with its black iron-enriched sand. 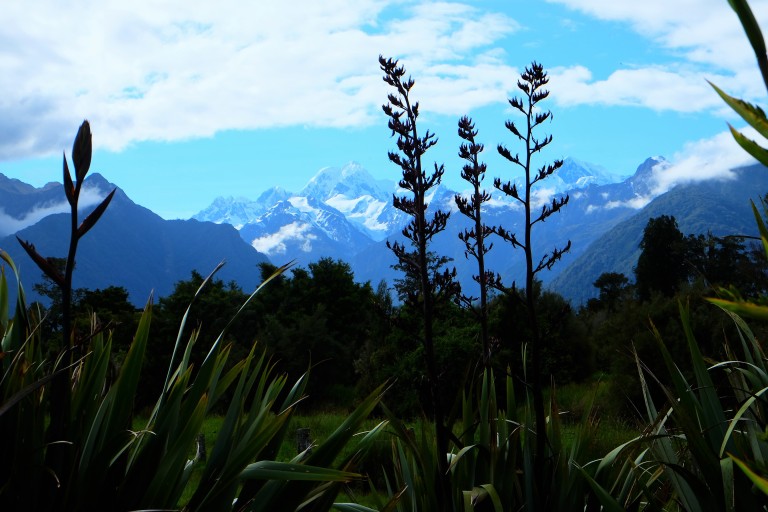 While the kilometre-loggers added a 30 km late afternoon ride to a gorge, I wandered Hokitika and then ran a bit along the beach. Once a few kilometres outside town, the heavens opened and yet again I arrived at the motel wet and cold. As my gear dried on a space heater I tumbled into a hot shower, emerging only just in time to rescue my shoes as they melted onto the heater. To let the odour of burning plastic out meant opening the window and letting the 8°C wind in. I huddled over the space heater until dinner time. Over drinks at Stumpers Bar, it emerged that most of Team Sky had hopped into the van upon arrival at the gorge thereby avoiding the rain altogether. “It was just an average gorge as gorges go” said the Australian racer, who had managed to cycle there and back before the rain. Did that make me feel better? I wasn’t sure but I do know that I would have been even wetter and colder had the kayak trip gone ahead.

A 55 km ride on the sixth day, yes in rain showers, was our final ride. We dried out at the train station in Arthur’s Pass and then boarded a train to Christchurch where we said our good byes.It had been a good trip despite the weather; the scenery and great guides made it so.

I had a day in Christchurch to witness the ongoing rebuilding of the central business district after the 2011 earthquake. It seems a handyman is supervising the reconstruction. I found out his name is Quasi. 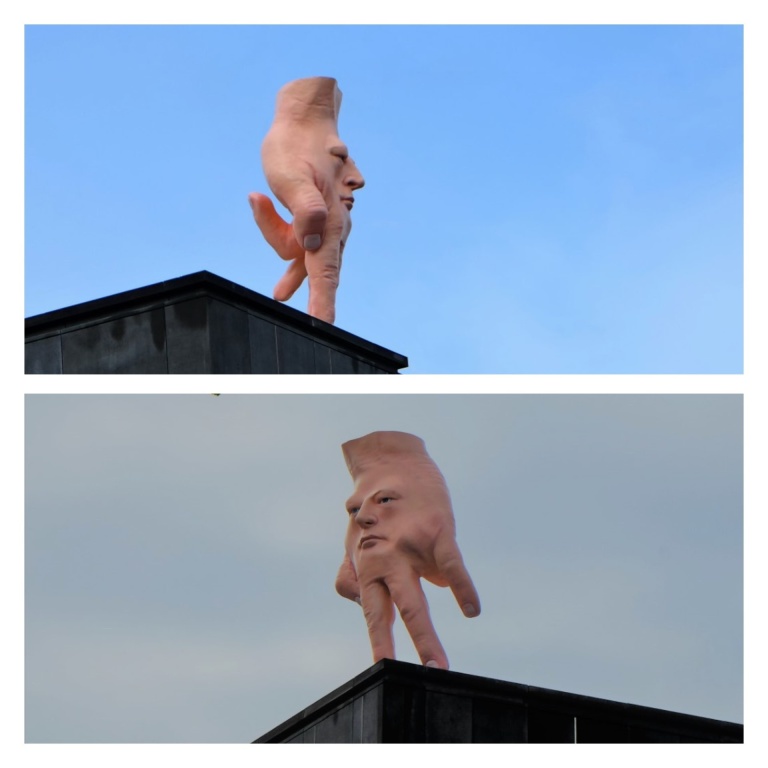 I spent a dry and relaxing day ambling around the city and the botanical gardens and I ran into the Australian. He was going to a bike shop “to look at the kit and find some good cycling trails”. Feeling guilty for no good reason, I picked up my pace.

I also spent two days in Dunedin, a city of 120,000 and the only one with well-preserved Victorian and Edwardian architecture. Situated on the southeast coast, it is built on and among seven hills. The surrounding natural areas are beautiful and home to the tiny blue penguins and an albatross colony. I could quite happily live there I think.

The Scots were the first colonists, and so Robert Burns is fondly remembered and stands proudly in the main square (octagon actually). He attracts local birds who, judging by the nature of their tribute, think little of his poetry.

With only four million people, New Zealand is empty, traffic is light, the airports are civilised and it is friendly, polite and gentle. Motels are still popular, not seedy, boast kitchenettes and the proprietor hands you a bottle of real milk for your tea and coffee when you check-in. It is a step back in time. Even the restaurant menus are nostalgic and memories of childhood meals came rushing back. Creamy mushrooms on toast for breakfast, runny lamb mince with mash for dinner, lamb shanks, toast with thick squares of real butter. Not typical Canadian fare but the comfort food our half-British family grew up eating. I ordered them all.

I only scratched the surface of New Zealand. There is much more to see on the South Island and the whole of the north island yet to go. Perhaps during another cold and snowy Canadian winter, I think to myself. Perhaps by kayak.

One thought on “Not Kayaking the South Island of New Zealand ”