It is summer in Canada and it wasn’t long before Ontario’s windswept, Precambrian, rocky wilderness called me back.

This time it was to The Massasauga Provincial Park, south of Parry Sound, a town of about 6,500. Campsites in the 131 sq km park are only accessible by water and are peacefully remote but have a picnic table and thunder box, unusual luxuries for backcountry campers. 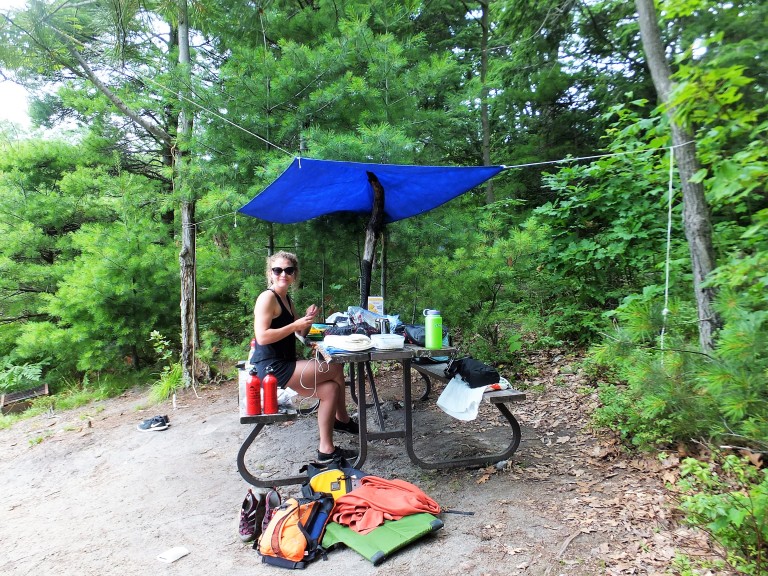 Massasauga is an Ojibwa word meaning mouth of the river. The area is in the woodlands of central Canada, the traditional homelands of the Ojibwa First Nation. We set out from Pete’s Place which isn’t much of a place at all but just a small office to register and a spot to launch a boat and leave the car. The water was still, the weather was warm, the paddling was easy and my daughter and I paddled confidently in our loaded kayaks. 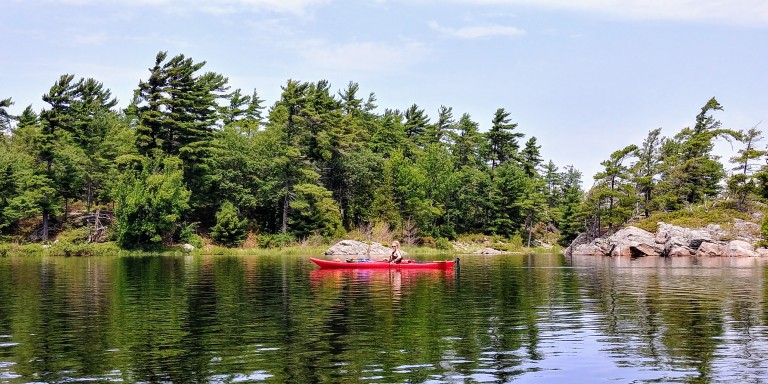 As always, we went in bear-wise, weather-wise and rattlesnake-wise. We were advised that there were bears about but that they hadn’t been bothering campers. I hoped that with this year’s wet summer, the good crop of berries made for fat and happy bears. The weather was beyond our control and the Massasauga rattler, the only poisonous snake in Ontario, and common to this area, is not a problem if left alone. It warns intruders by rattling when it senses danger and will bite if startled, making an immediate trip to the hospital necessary.

As we paddled among the thickly wooded islands I thought of the Ojibwa. I imagined passing their hunting and fishing camps on the shores of islands and their birch bark canoes, heavily laden with animal skins. The Ojibwa were actively involved in the fur trade from the early 1600s to the mid-1800s. They would have scoffed at our light-weight fully packed kayaks that we complain about as being heavy, at our bear spray (instead of a bow and arrow or a gun) and at our need for maps. 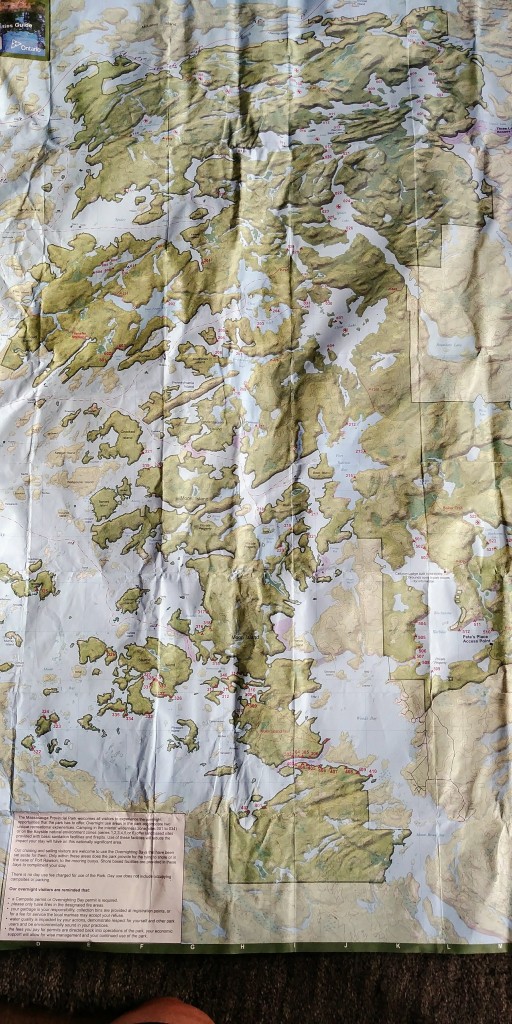 Yet even with a map, distinguishing between the islands is tricky. Inexperience judging distance over a body of water makes reconciling the map’s scale with reality challenging. Island shape, a useful identifier, is easily seen on a map but often not obvious when sitting at water level in a kayak. We held the kayaks together at times while huddled over the map arguing about which way to go. We benchmarked our location by finding another campsite and from there we found our way. 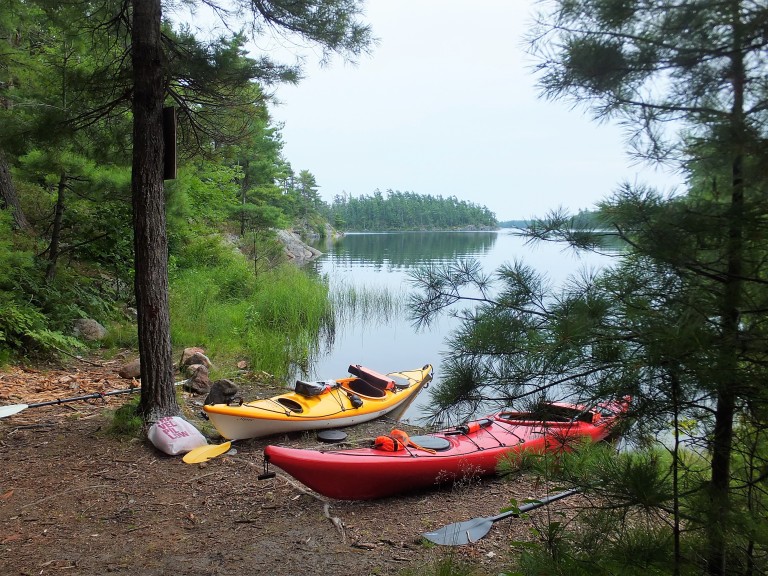 After drinking a beer, walking the island, building a fire, filtering water to drink, preparing dinner, washing up, going for a swim and doing yoga stretches, we remembered that we still had to choose a tree on which to hang the food bag overnight so that it didn’t attract bears. The coniferous trees nearby, however, didn’t have any horizontal branches at a reasonable height. I pointed out a single deciduous tree that I thought had potential and the debate began.
“It’s too close to the tent” was the argument.
“But it’s the best one” I replied.
“Here is a better one, beside the thunderbox” she said.
“Who wants to hang the food beside the thunderbox” I retorted. “And besides look at the ground below it”.

On the ground was a large paw/claw print and the remains of two bags one of which had seemingly once held hamburger buns.

“I won’t hang it there. I think bears have memories.” I said.
“Well I won’t have it near the tent, let’s kayak along the shore and find a tree” she countered.
“What!? and then have to jump into the kayak first thing in the morning and travel for the breakfast supplies?” I asked incredulously.
‘Yes” came the response.

And so off we went, kayaking around the bay pointing at trees and discussing them: too rocky to approach in the kayak, too small, too big, too Y-shaped with not enough branches, too much undergrowth. The light was fading. Having no luck we paddled back to camp.

“Oh, alright, let’s use that deciduous one close to the tent, but I think the branch is too low and I won’t sleep well” my daughter finally said in desperation.

“I’m sure it will be fine” I replied reassuringly, knowing that the guiding rule of food hanging (at least 10-15 feet up and 5-10 feet out) was about to be broken.

We tied a rock to a rope and took turns throwing it over the branch, often missing or entangling the rope on other branches. Three times the rock freed itself and went hurtling into the forest. We tied a bag of rope to the rope and threw again. Finally, success. We scrambled to hoist the food bag. The branch creaked, cracked and promptly broke so that it hung vertically from a remaining piece of intact bark. Down came the food narrowly missing our heads and leaving the rope wedged in the V-notch created by the broken branch. I sensed satisfaction in my daughter’s expression. We pulled and we jumped and eventually we managed to free the rope. And then we began again.

After more tramping through the forest, more lively debate and more throwing, we managed to hoist the food bag up a tree-of-last-resort. Once up, the weight of the bag and the steep angle of the branch caused the rope to slide down the branch to the tree trunk. Although high enough, the bag hung flush against the trunk. It was almost dark.
“That won’t do, the bear will just laugh at us, climb the tree and take our food” I said.
“I don’t care, I’m going to bed” she said.
I conceded. “So am I” and off we went.

Lying in the darkness we listened for bears but there was only the sound of rain beginning. I woke up a few times in the night and listened. Nothing. In fact, the island seemed completely devoid of wildlife. It all seemed a bit of a let down after our preparations.

We quietly ate our breakfast the next morning while reminding ourselves that it is better to be safe than sorry, trying to justify yesterday’s angst. 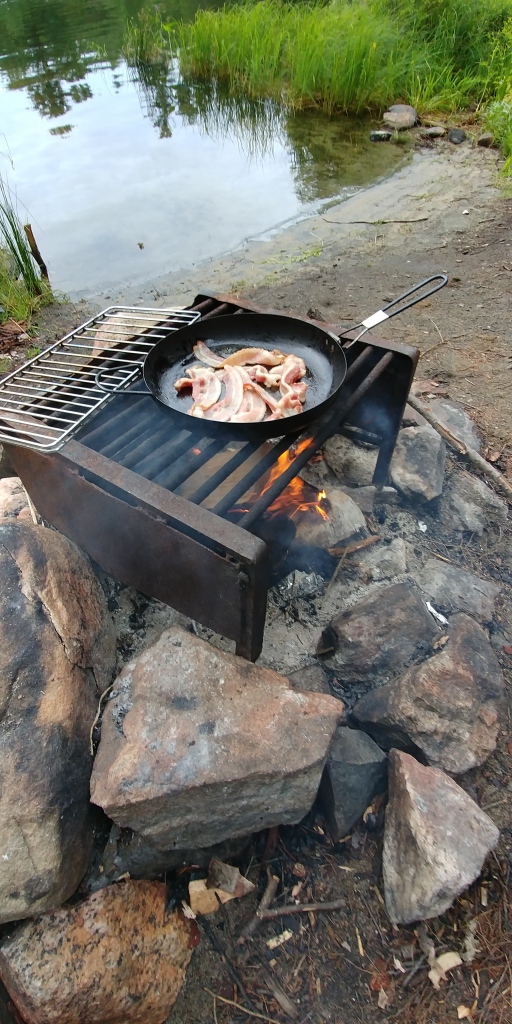 The weather prediction was rain and 20 km/hr winds for the next two days and, although we planned to stay, neither of us relished a wet paddle against challenging headwinds. Instead we decided to come out. 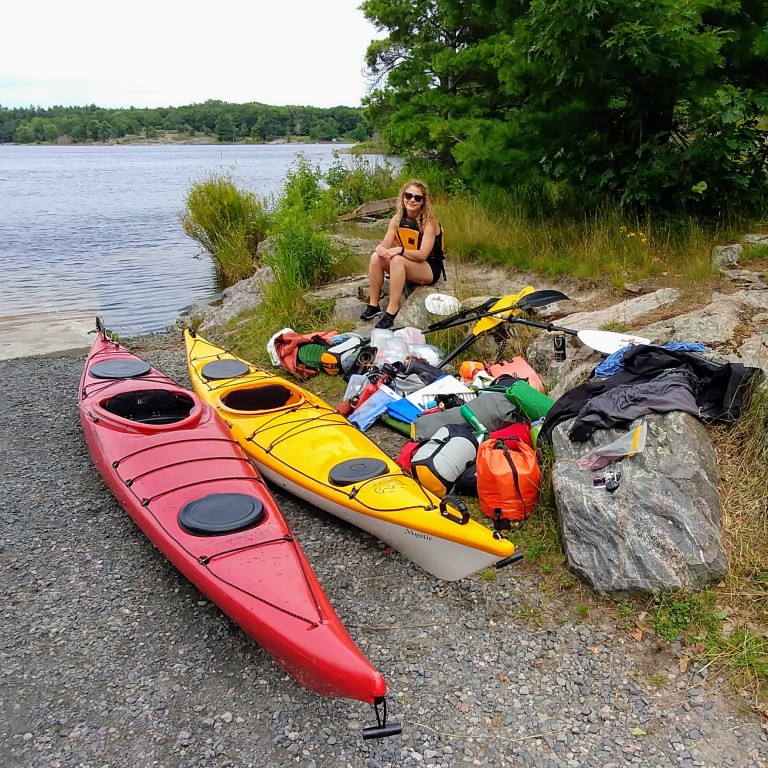 Searching for and arguing over the ideal food-hanging tree, endless rock-throwing and rope untangling is all part of the backcountry camping ritual. As we speak, however, I am googling where to buy bear-proof barrels small enough for a kayak. Perhaps next time, there will be no blog because I will have nothing to tell as I will have spent my time at camp sitting in the sunshine on a rock reading a book. Perhaps….but not likely. It’s not in my nature.

2 thoughts on “Tree Tribulations at The Massasauga”