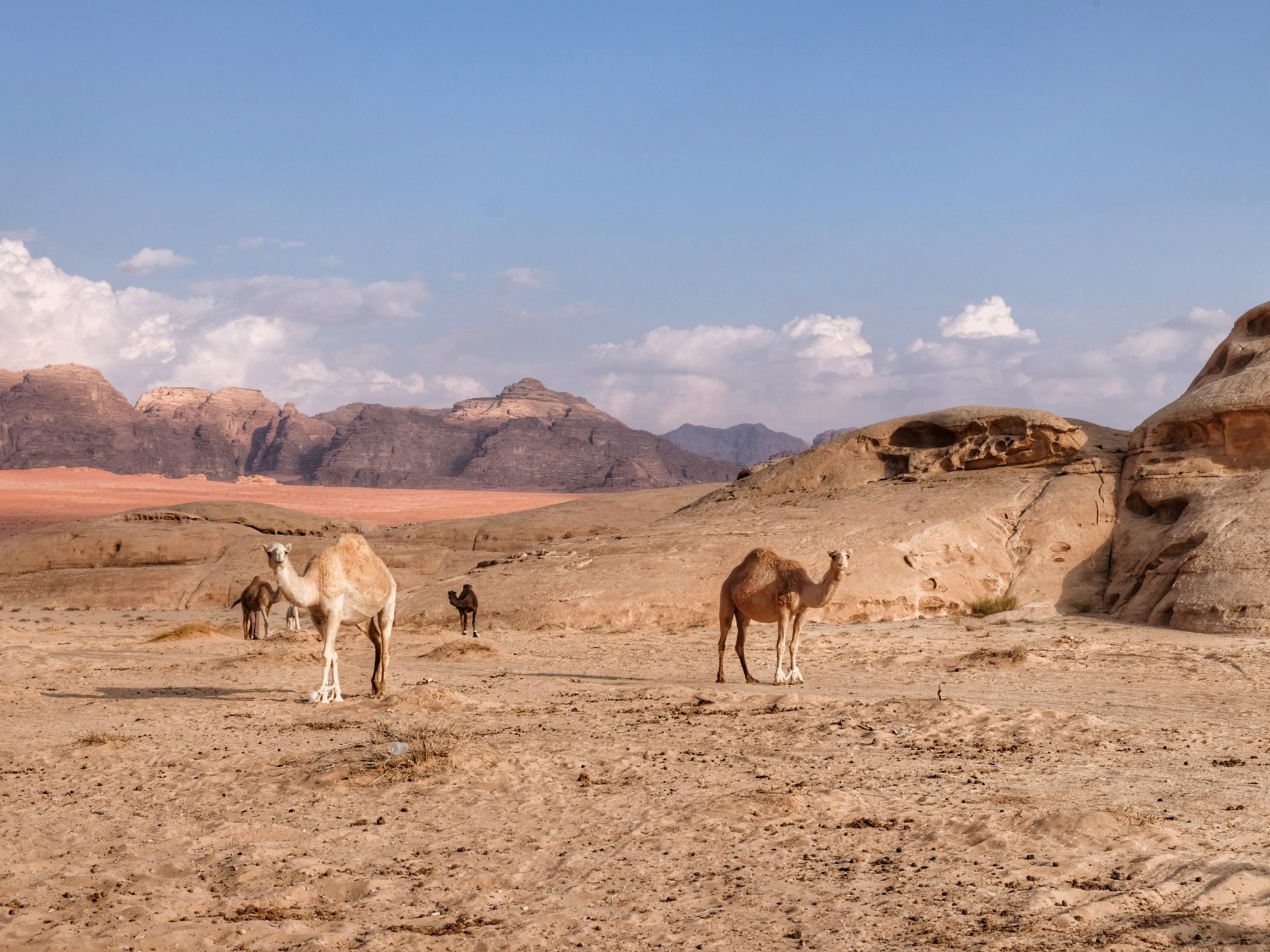 I closed my eyes as we raced from Jerash to Madaba. It was rush hour now and dark and our taxi driver was frantic. Driving madly fast, inches from the car ahead, he switched lanes every few minutes, frustrated with the traffic and with us. I’m sure his shift was over and that he regretted agreeing to a flat fee for the day. Sometimes he sat between the two lanes, threatening to squeeze up the middle. He opened all the windows and I’m not sure which was better – relief from his b.o or the traffic exhaust that was now catching in the back of my throat. Would I die in a car crash or from lack of clean air? I wasn’t sure.

In three taxis, nine of us left Madaba earlier that day for Umm Qais in Jordan’s northwest corner. From the ruins of the ancient city of Gadara at Umm Qais, the Golan Heights region of Syria is visible and you can gaze through the haze at the Sea of Galilee. One hour at Gadara, then on to the ruins at Jerash, that was the plan which, as it turned out, only three of us knew about. The ruins date back to the 3rd century B.C. and we quickly went our separate ways exploring temples and amphitheatres. Most trickled back to the waiting taxis, well after the one hour allotted and the drivers were fuming. Our chances of making it to the ruins at Jerash before closing were slim.

The ancient city of Gerasa at Jerash is one of the best preserved examples of Roman and Byzantine architecture in the world. Some fast driving managed to get us there 10 minutes before closing and we all began to run, through the front gate and on to the ruins. Six quickly dropped out leaving only three of us to reach the real entrance, where we were to hand in the tickets we didn’t have.

Feigning concern and sounding earnest, I explained that we’d already been in and lost our friend on the way out and must go back to find her. It worked and in we ran, down the old Roman Road and through some of the ruins before the sun dipped below the horizon and one of the staff turned us around and ushered us out.

That brought us to rush hour and the drive back to Madaba, and to me with my eyes closed, fighting respiratory failure from diesel fumes as Mario Andretti chatted on his mobile. “If you survive, tell my kids where my will is” I said half-jokingly to my fellow passengers. No response; their eyes were glued to the road. I should have been blasé about the drive. After all, I’d spent the past week on wheels in Jordan, in all sorts of vehicles, at all sorts of speeds. Still, when we arrived safely in Madaba, the shop facing our hotel seemed more appealing than ever.

When our exploration of Jordan began, it began more slowly, on foot in fact, as we explored Amman (Jordan’s capital).

The biggest hazard with walking was tripping on litter. Jordan is a developing country with a small economy, and while it has the disposable conveniences of modern society, it hasn’t the infrastructure or systems to manage the stuff of which it disposes. The throw-it-away culture means toss it on the street in this rapidly growing city. Once you get used to it, it almost takes on an art form of its own.

In our part of town, every third shop seemed to be either a car repair or an auto body shop and, judging by the state of many of the cars, they are not short of customers.

We did give the taxis a go one night however.  We hailed two cabs for the short trip from our hotel to the Dali restaurant. Despite having Google maps, for almost 30 minutes the two taxis drove in circles with neither driver able to find the restaurant. It wasn’t easy to miss and I’m sure they knew where it was because it magically appeared when we said we’d get out and walk. It’s a common trick but the fine meal we had made up for it. The leisurely stroll back to the hotel was a mere 15 min, over which we had a good laugh. 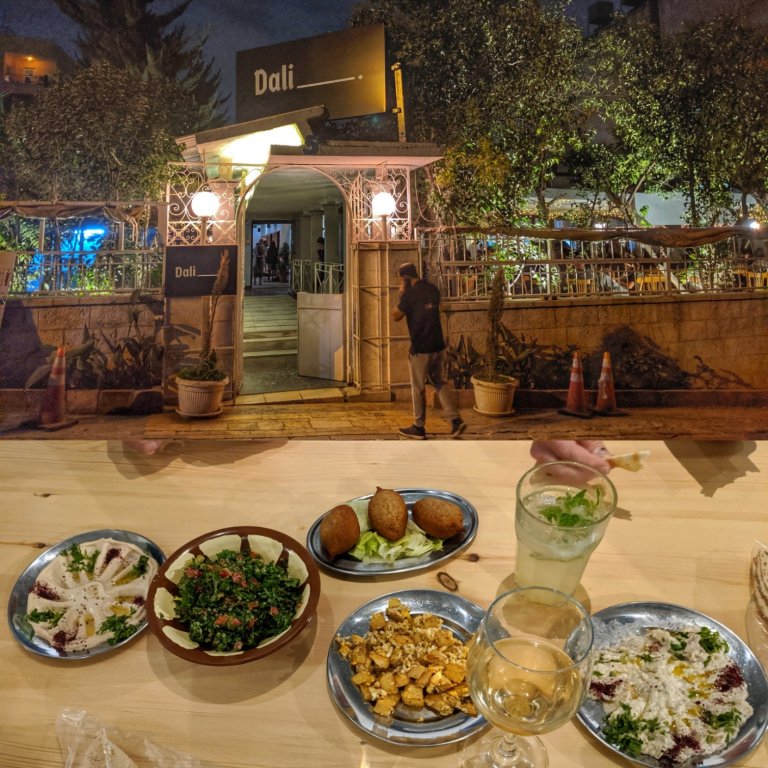 We gave up on taxis after that and the next night walked the night markets, gorged ourselves on street food, ate honey cakes from the bakery and wound down the evening at a local shisha bar.

With everyone’s arrival, we numbered 12 and a minibus was the only way to accommodate all of us, as we set off the next morning to float in the salty, Dead Sea before it disappeared. The Dead Sea is shrinking fast from decades of water policies designed to support the fragile economies of the region’s water-poor nations. Climate change is only adding to its woes. Israel and Jordan planned to slow its retreat by pumping from the Red to the Dead but the plan is mired in politics, controversy and poor bilateral relations.

It’s warm and it’s wonderfully floatable but it really is quite dead, so if you look in the opposite direction you’ll see where we spent most of our time…..sitting at the pool bar.

Salty, sunstricken, full of food and light-headed from drink, we wobbled back to our minibus and sped off to Petra for a couple of days.

Our driver drove quickly, faster than the speedometer could manage but when it came to acceleration the minibus choked. More than once, we ran out of passing lane and had to use the shoulder to slip by an 18-wheeler. I was chill through it all because sun, dehydration and cocktails form a potent relaxant.

The ancient city of Petra was lost to all but the Bedouin until its discovery by a Swiss explorer in 1812. It is a honeycomb of caves and temples carved into the sandstone cliffs in the second century B.C. Petra was the capital city and trading centre for the Nabateans, a nomadic desert people.

It’s a 1.5 km walk into Petra through a geological fault formation known as the Siq, a winding, water-sculpted fissure carved into the sandstone cliffs that is only 3 m wide in places. The walk in is as impressive as Petra and the first glimpse of the sunlit Treasury from within the dark Siq is magical.

Some Bedouin (and Fred and Wilma, I think) still live in the caves in Petra. They make their living selling local products and transporting tourists back and forth through the Siq on donkeys.

Outside Petra, the traffic thins and the winding roads through the desert hills were empty. The only thing that slowed us down was the odd runaway camel.

In the afternoon, we switched up our wheels and our driver for an off-road ride to the remote Feynan eco-lodge. The Feynan eco-lodge sits on the edge of the Dana Biosphere Reserve and has a rich archaeological history dating back to Neolithic times.

While the others rode in 4X4s, I chose a shabby-chic van with a Jordanian-Westfalian feel. Its astroturf floor, perhaps an attempt at an outdoorsy/backcountry/campervan look, didn’t quite hit the mark but it was still a sweet ride.

As we came out of the lodge, a new set of drivers with a new set of wheels awaited us for the trip back. Job-sharing at its finest (and two sets of tips) helps the eco-lodge fulfill part of its purpose, to provide economic opportunities for the local Bedouin.

From the eco-lodge it was on to the Dana Biosphere Reserve. Their “shuttle bus” took us into the reserve and I had to sit atop all the luggage to hold it in place while the driver inched the overloaded shuttle bus down the very steep hill into the campsite.

The biosphere reserve sits on the face of the Jordan rift valley. I marveled at the warm, pinkish hues in the early evening light, listened to the silence in my teepee that night (in between the snores from nearby tents) and admired the views from the plateau the following morning.

Then it was on to Wadi Rum and the preferred mode of desert travel: sand-running in the back of pick-ups and off-roading on camels. 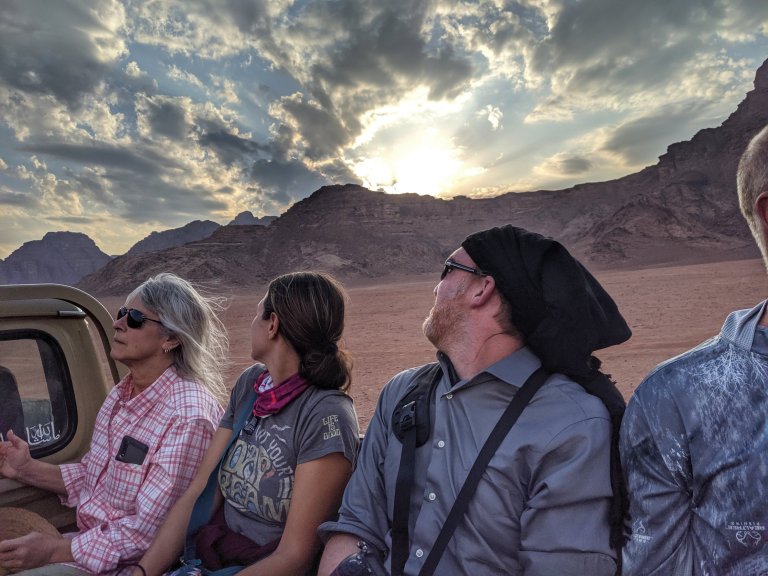 We glamped with the Bedouin which meant yurts, real beds and electricity. While some thought this was roughing it, I thought it was 5-star compared with my usual sleeping-outside arrangements – in a tent in a forest, on a Thermarest on the ground, hoping the bears wouldn’t find me. The desert light at dusk, the peacefully sleeping soul I came across at dawn one morning while out walking, and the comfort of sweet tea with the Bedouin left me with happy memories of the Jordanian desert. 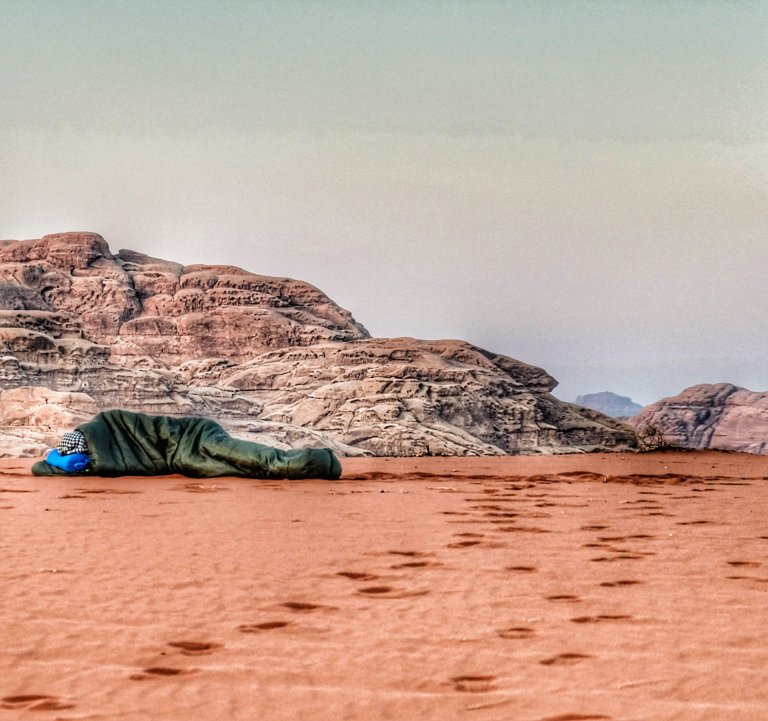 We did take the camels out for a spin to Wadi Rum. I’ll admit, it wasn’t exactly a Lawrence of Arabia spin, it was more the speed of circular, tethered horse-riding at a local fair. I don’t ride horses, camels or any animal for that matter, and I found their arched, bony spines particularly uncomfortable despite the saddle. It occurred to me that the padding of camel-toe underwear might have offered some relief. Apparently, it’s a thing in Asia right now, although its purpose has nothing to do with riding camels…  For the record, no, I don’t own any but I did wish I’d brought along my gel-seated cycling shorts.

Our final set of wheels was once again the minibus. From the Dead to the Red, our last stop was Aqaba, on the Red Sea, with its opulent seaside resorts, luxury yachts, vibrant nightlife and welcoming spice markets.

Between Aqaba and Madaba, we spent our last day on the minibus rehydrating to music, a combination that always creates punchy people who think they can sing. Our good-natured driver endured our lack of talent for longer than most, then wisely picked up his speed and switched the tunes to Jordanian pop, knowing we couldn’t sing along. I sensed relief as he gently poured the woozy lot of us out at our hotel in Madaba.

As this story comes full circle, it was the next day, in Madaba, that a spur of the moment trip to Umm Qais and Jaresh seemed a good idea. This brings me back to the late day taxi ride after Jaresh with the frustrated taxi driver, and sitting with my eyes closed hoping to make it back to Madaba alive. It occurred to me then, that it’s the adventure in travel that really keeps me alive, and Jordan on wheels was no exception.

“Because in the end, you won’t remember the time you spent working in the office or mowing your lawn. Climb that goddamn mountain.” – Jack Kerouac

7 thoughts on “Jordan on Wheels”