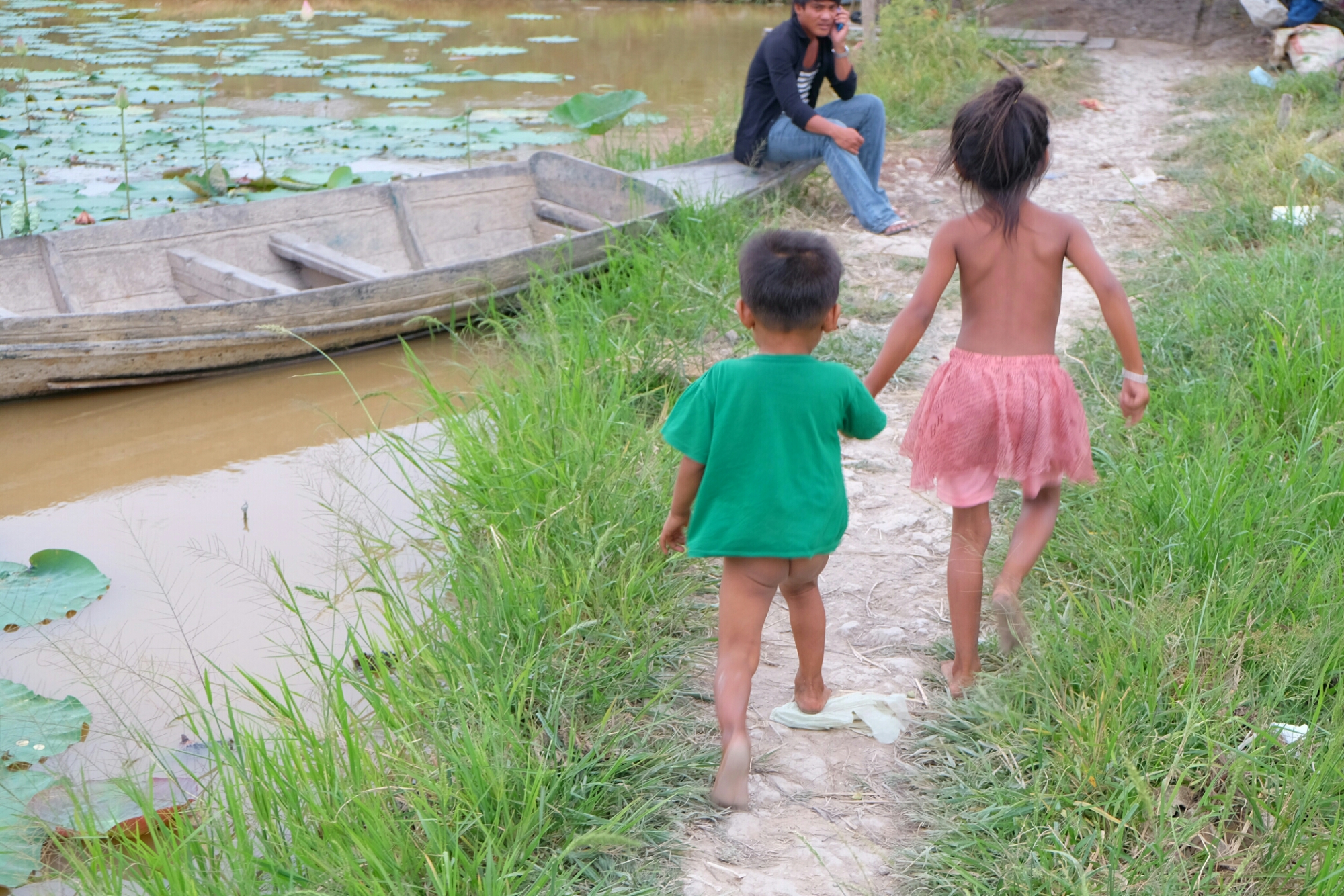 When planning my cycling trip to Vietnam, adding four days in neighbouring Cambodia was an opportunity too good to miss. What I neglected to consider was that I would be visiting in Cambodia’s dry season when temperatures of 37°- 40°C with 75 – 80% humidity are common. Cycling in Vietnam was hot; cycling in Siem Reap, Cambodia was really hot! Not only that, the lush green Cambodian countryside seen in brochures was instead parched and brittle.

I had hoped to show you a bird’s eye view of this other face of Cambodia. After a 50 km sauna-cycle, I climbed 625 steps up “the mountain” as the locals call it, to photograph this sun-baked, brown landscape. As luck would have it, on reaching the top, my camera decided that the previous photo was the last bit of work it was prepared to do that day. It refused to make the slightest effort until recharged, and so my extracurricular uphill hike was not rewarded with even one photo.

I did take many more temple pictures than necessary though, mostly because the scope and scale of these religious monuments is mind-boggling. The Angkor region of Cambodia flourished from the 9th to the late 14th centuries and served as the seat of the Khmer empire. The temples are some of the largest religious monuments in the world. Angkor Wat, the largest and best known, dates from the 12th century. Angkor meaning “city” had the temple at its core and is thought to be the largest pre-industrial city in the world. 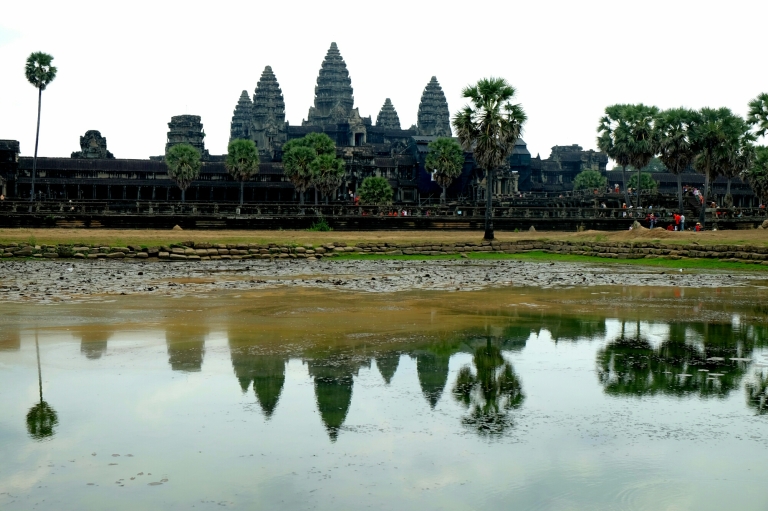 Built from sandstone blocks, records show its construction required over 300,000 workers, some 40,000 elephants and 37 years, and still it was not finished.

With expansive flat galleries and numerous towers, it contains about 6 million sandstone blocks each weighing up to 1500 kg. The quarried sandstone was floated on rafts down the the river and through canals and then dragged by elephants to its final destination, more than 50 km from its origin. 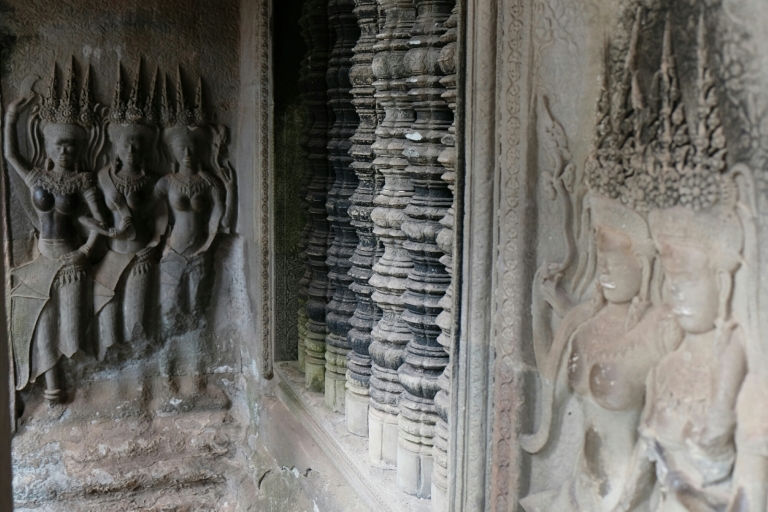 There are intricate carvings including more than 3000 heavenly nymphs (apsaras) but many were damaged by a bad acid trip. In the 1980s, acid was used in an effort by India to restore the temples, dissolving the carved face of many of the blocks.

We cycled from Siem Reap over three days and saw Angkor Wat, Bayon at Angkor Thom, Ta Prohm, Banteay Srie and the more distant and unrestored Beng Mealea. Each temple is set apart from the others either by its size, huge carved faces, numerous towers, intricate carving, sandstone with pinkish hues or differing building material (brick and laterite versus sandstone block). 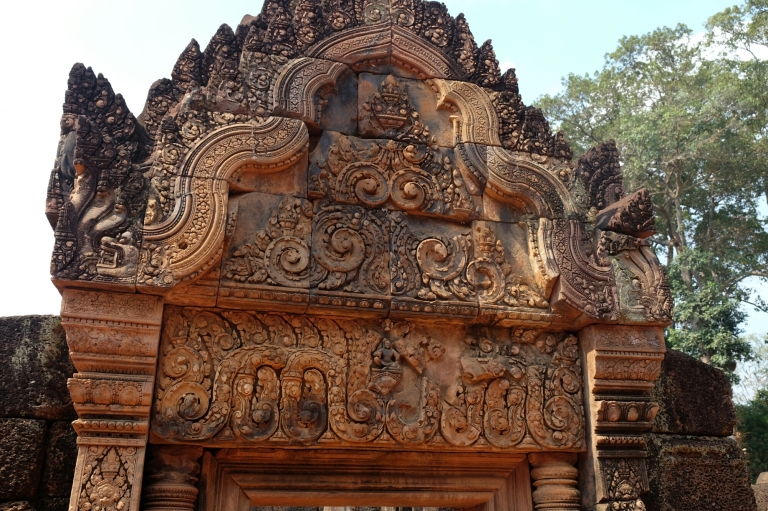 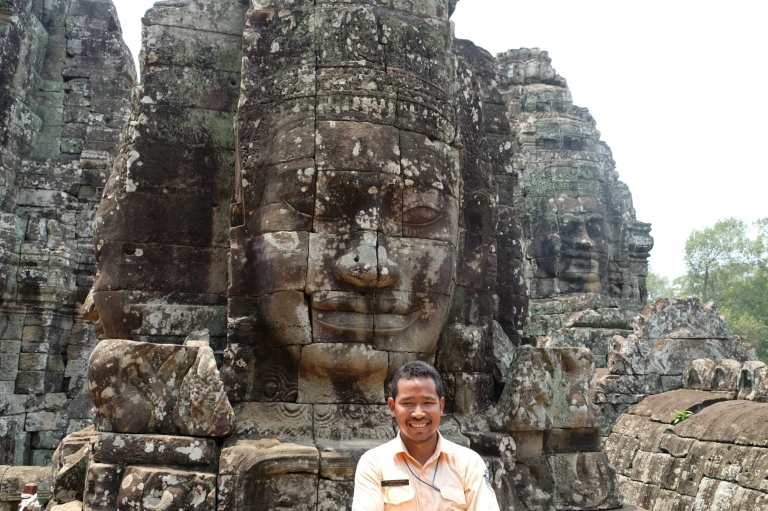 Beng Mealea, about 60 km from Siem Reap, is unrestored and lies within the jungle hugged tightly by a tangle of tree roots. It was built over 12 years in the same period as Angkor Wat. Given its architectural similarity, some say it may have been an unfinished prototype for Angkor Wat. A 12 year pilot project temple? Are you kidding me? I can only imagine the many disgruntled workers and potential temple tantrums that might have erupted when the workforce was told ” Oh, sorry just kidding, it was only a 12-year trial, let’s wrap it up now and begin the real one!”

We also squeezed in a trip to the Great Lake (yes there is another one) Tonlé Sap, to see the floating villages. 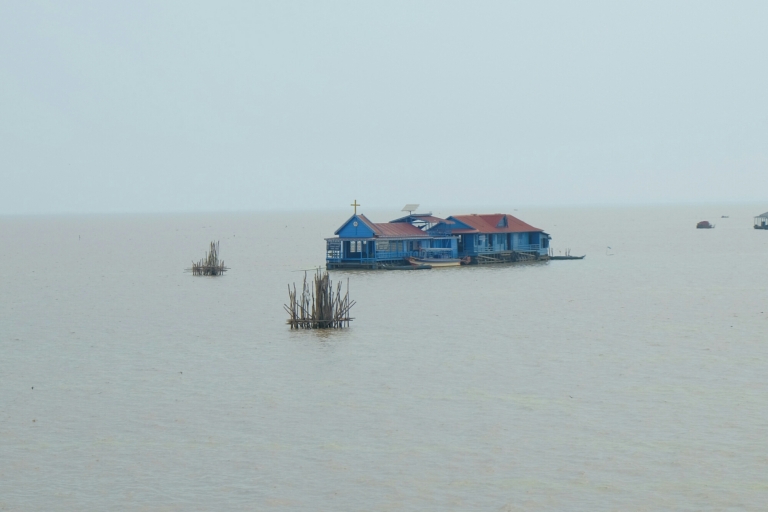 The “greatness” of this lake varies considerably with season. While its claim to fame is the largest lake in SE Asia, we saw it at its smallest. From November to May in the dry season, the Tonlé Sap drains into the Mekong River at Phnom Penh but during the rains that start in June, the Tonlé Sap backs up to form an enormous lake six times its low water size. Although I was told that the water is blue when the lake is swollen, at this time of year it is brown and thick with sediment.

In fact, it had the look and consistency of gravy and special gravy boats are required to navigate it. Long tail boats with motors mounted on long poles stretching off the stern allow the boats to churn through this shallow, viscous lake. Even still, skillful navigation is necessary to avoid getting stuck in the mud, so the boats play chicken aiming head on at each other to see who will back down first. This means the boats pass each other sometimes with barely an inch to spare.

Despite the murkiness, it is one of the richest freshwater fisheries in the world (based on fish taken per square km). When lake conditions change, villagers need not pack their belongings and move to a new house; they simply pull up anchor and the anchors of the school and shops and change location. 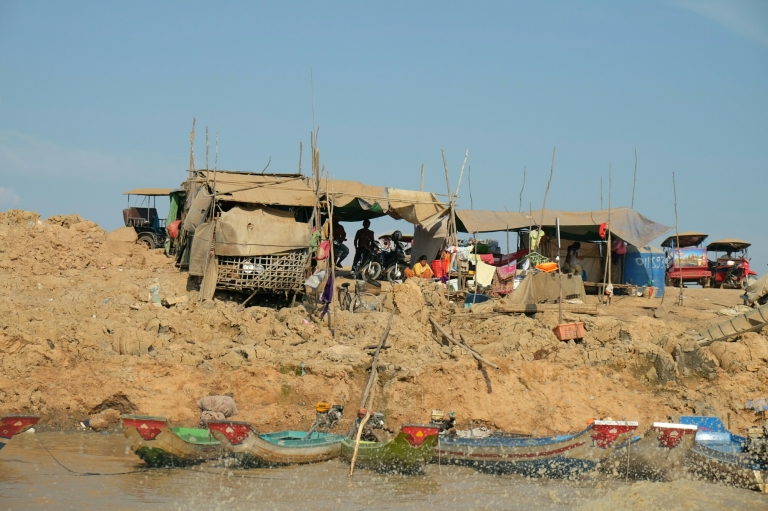 At day’s end we visited a lotus farm just as the lotus flowers were opening. I appreciated the peace and quiet of this magical spot after the fury of engines as boats battled through the muddy channels of Tonlé Sap Lake. 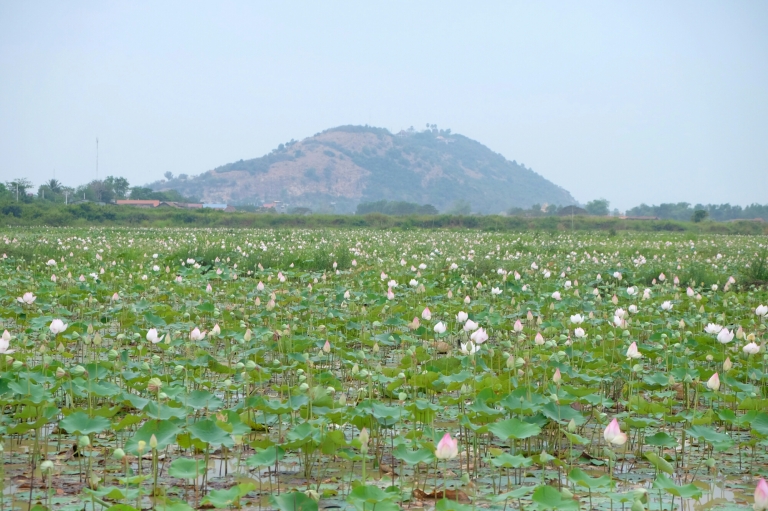 As I curbed my mounting hunger by snacking on lotus seeds, I knew that three days do not do justice to this interesting country. Nevertheless, it was time to head west….on to Spain. 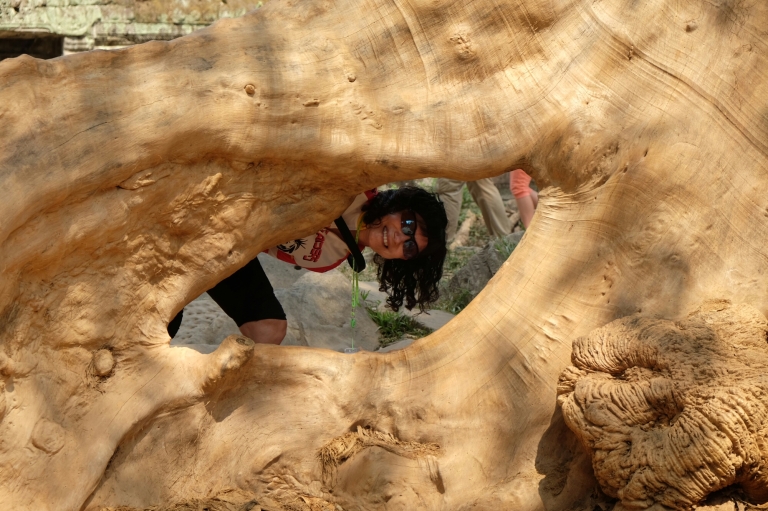