St. Ives in Cornwall has attracted artists since the late 1800s when the railway was extended to the southwest. It has had an active community of artists ever since and it is easy to see why. This bit of Cornwall with its magnificent beaches, has no end of breathtaking views, particularly in the sunshine. I am sure that even during stormy skies, high winds and rough seas, the colours and pounding waves are dramatic.

I was fortunate to have four sunny days and also fortunate to visit when most of the tourists don’t, a selfish comment from a tourist herself. The town was lively, buzzing but not overflowing with visitors – a wonderful place to relax. 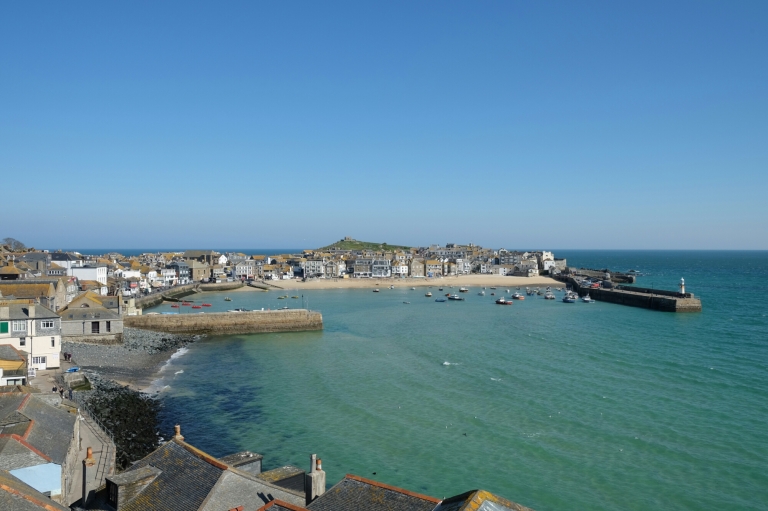 I had two missions, walking the rugged coastline and browsing the many galleries in St. Ives. I was told surfing should be on that list. The air temperature was between 12° C and 17° C, and although the sea looked inviting, there were no waves. This suited me well. There was not a soul in the water and had I rented a wet suit and taken a lesson (yes the thought did cross my mind) I alone would have been the source of amusement for the entire town, either until I drowned or gave up (probably 15 minutes for both). Luckily, the surf shops were closed. Good excuse. Walking seemed safer.

Using my phone’s GPS, my first walk was along the southwest coast trail from St. Ives to Zennor. It was a fantastic walk with lots of up-and-down scrambling over rocks and boulders. Many times, the trail winds down into sheltered coves, deeply carved into the granite and greenstone cliffs, and then rises up again. 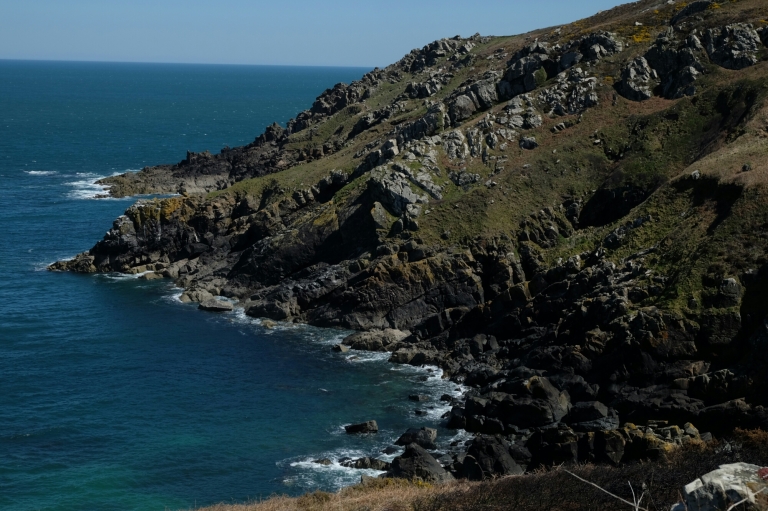 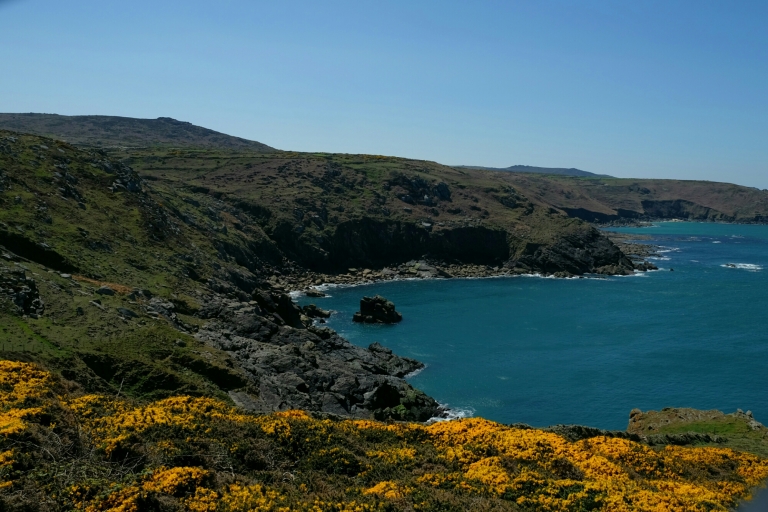 It was my kind of walk. With every hill came a new vista and it was hard to stop taking photos.

The path eventually climbs inland to the small village of Zennor.

Three hours later I was sitting in a lovely pub sampling local ale and eating pâté. Well engaged in conversation and beer, for an hour I didn’t think to ask about the bus back to St. Ives. I hadn’t started walking until 11 am and found that the last bus leaves at 3 pm. With three minutes to spare, I ran up the lane to the main road where I came across three elderly men sitting on a bench by the hedgerow. Luckily, the bus was late and upon over hearing their conversation, I was certain I was in an episode of Last of the Summer Wine. Although one of them could barely walk, they were plotting their next adventure and discussing……of course, women.

The next day I did an easy loop that took me behind St. Ives through fields and woods to Carbis Bay and back to St. Ives. Navigating this one was trickier. It has many turns, forks in the trail, passes through residential neighbourhoods, pastures of grazing horses and forests with no discernible path at all. I found a great phone app though that provided a map, gave excellent directions and included the history along the route.

Above is the view from the walk’s starting point. It is a parking lot of seemingly no interest but in the 1800s it was the Wheal Trenwith copper mine. “So what”you say? Well, unbeknown to the miners, mixed with the copper ore was pitchblende, which was then thought to be black copper oxide ore. When smelting it yielded little copper, the waste was discarded on the site. Unfortunately for the miners, it was not until years later that pitchblende was identified and found to contain radioactive uranium-238. Between 1911 and 1917, 694 tonnes of U-238 was recovered, mainly from the waste. Today they warn that pitchblende waste is still found at the edges of the parking lot and that “ingesting it would not be ideal”…I laughed at that. The English have such a delicate way with words. The warning then went on to explain nuclear decay and alpha particle generation. No. Not ideal. 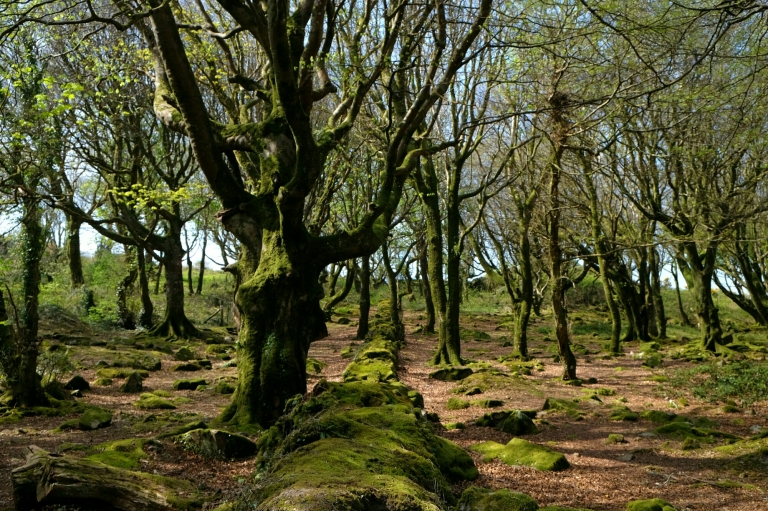 I passed through forests with old mine shafts and a granite obelisk monument built in the 1700s by a St. Ives mayor in honour of himself! The path then wound through a neighbourhood of Carbis Bay that could pass for Victoria, British Columbia, and on to some stunning views of the bay itself. 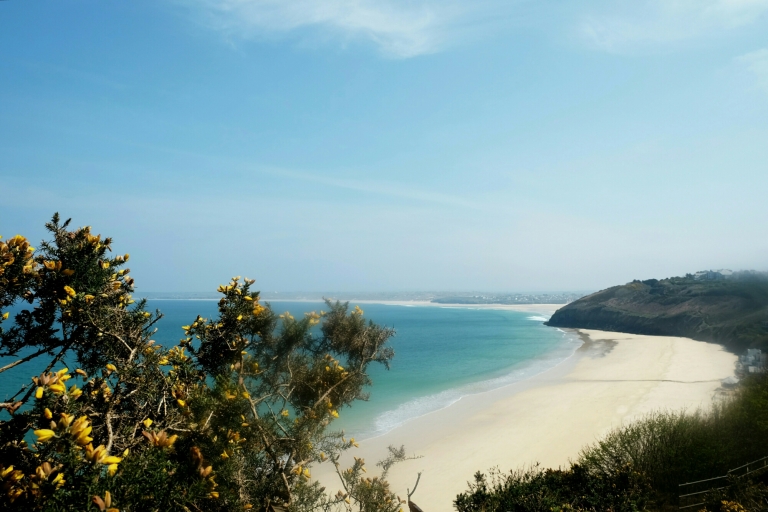 The last leg went along St. Michael’s Way, part of the ancient pilgrimage route to Santiago de Compostela in northwest Spain, and thought to be one reason Cornwall converted to Christianity so early.

I also wandered galleries and studios, talked to local artists and was invited to a poetry reading. Having been to maybe one in my entire life, this trip seems rather heavy on them (see Spain Again). While admiring two paintings in the daylight of the street, friendly passers by stopped to give their opinion and advice.

The weather changed just as my days in St. Ives finished. Today, as the rain moved in, I took the train north. Next stop Bude.