On the train from Manchester to York I didn’t think about the week ahead, I thought instead of having a shower and getting some sleep after flying overnight. As the countryside raced by, I thought of my mother as a child in Cheshire and of my friend from Huddersfield, now living in Australia. I’d been to Yorkshire twice before but never for anything like this. Later that afternoon, I passed time in York Minister, the largest gothic cathedral in Northern Europe, built over 250 years between 1220 and 1472. It dominates the city, has the widest nave in Europe and is the seat of the Archbishop of York, the second-highest office of the Church of England.

I walked through the network of streets known as the Shambles. Shambles Lane in the centre is a medieval street and in the 15th and 16th centuries it was lined with butcher shops, each with an overhang and wide sills or shelves (fleshammels) used for displaying the meat. Today, when we refer to something as a shambles we are basically calling it a meat market. 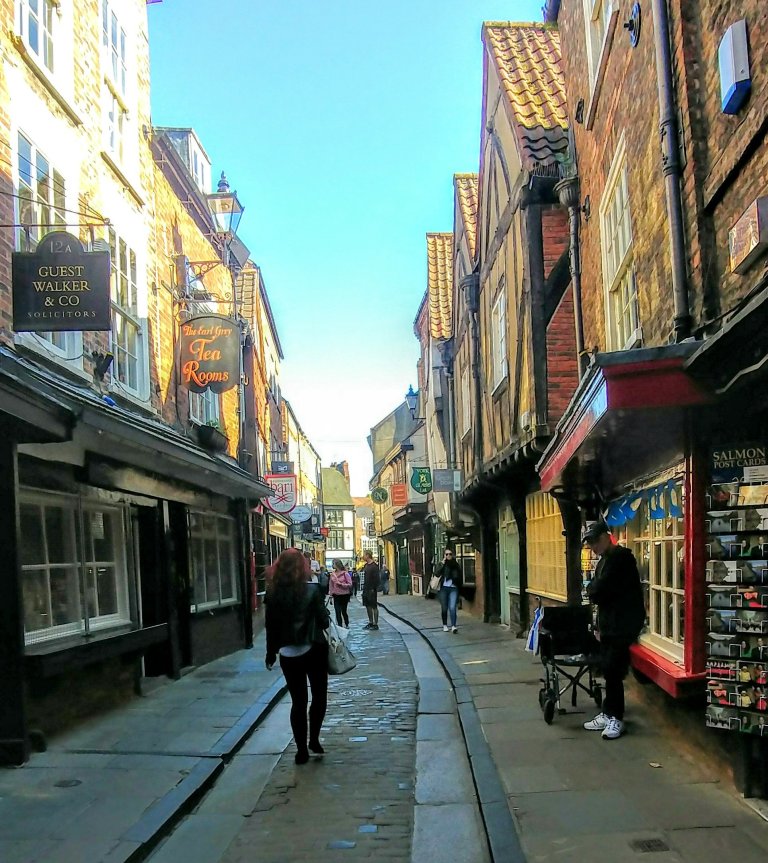 It wasn’t until the following afternoon that I confronted my reason for being here. Eight months ago, I’d clicked on an ad for a writer’s expedition, a writing workshop combined with travel. In my usual jump first, think later way, I signed up, paid my deposit and forgot about it. Now here I was, at a table with 10 strangers, self-penned bio in hand and preparing to read it to everyone. I listened as each writer and aspiring writer read theirs. One had just sent off a young adult fiction novel to a publisher, another wrote children’s books, there was an editor, a writer of short stories, a writer of magazine articles, and there was me.

Surely, a few scientific journal publications written 100 years ago were irrelevant to a writing workshop entitled Decency be Damned. (In my haste to book I’d neglected to ask why it was called this). So I told them other irrelevant things instead – the origin of my name, my love of travel, my problematic curly hair and my luggage contents. I told them I disliked talking about myself and, most importantly, that I wasn’t a writer. They nodded and smiled as strangers do – off to a good start.

York is very haunted which is good because instead of writing, we straight away went to look for ghosts. Our ghost tour guide aimed to unnerve us with stories of hauntings but with his over-the-top acting and bad jokes, the tour resembled a 19th century traveling medicine show. Out of all the haunted buildings I only remember the pubs, so if you want a spirit with your spirits visit the Cock and Bottle, the Black Swan and the Golden Fleece. We landed in the Golden Fleece after the tour. Built in 1503, it apparently houses 15 ghosts but it is 300-ish year old Alice, the Mayor’s wife, that most often hangs about.

Full of beer by 11:00 pm, we were told to write a ghost story for dinner time the next day, either a true story or a fictitious one involving true events about our journey to York. I was 10 when I last wrote a ghost story and ghosts avoid me so it wouldn’t be easy. Moreover, tomorrow’s agenda was full – a walking tour of York, a tour inside York Minister, a walk on the city walls and a visit to the ruined St. Mary’s abbey, established in 1088 by Benedictine monks. 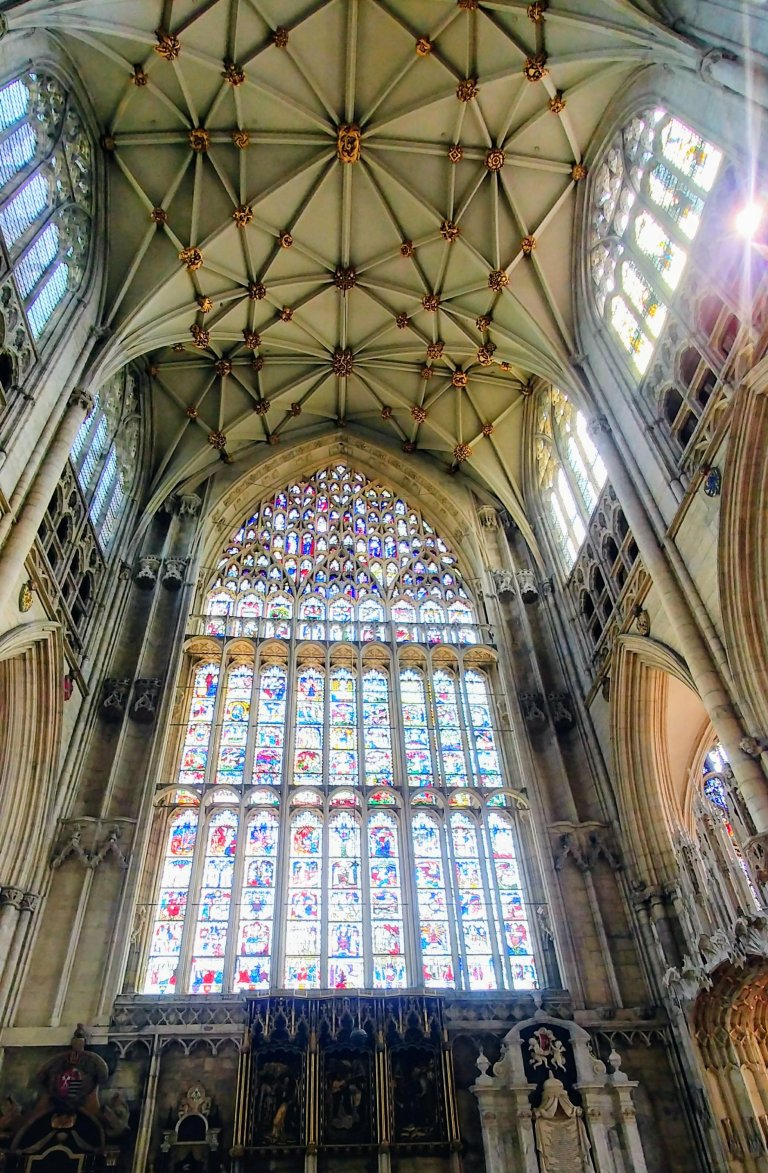 The following night after dinner, we had to read our hastily written ghost stories aloud…in the restaurant, decency be damned. I was sure customers at adjacent tables hadn’t thought to ask if the restaurant was wannabe-writer-free before sitting down.

On day three we had a scavenger hunt. Three to a group, we had two hours to gather information from around the city. In my group was a woman with a foot problem from the Yukon and a French-Canadian lady who marched to the beat of a different drummer. With Yukon Jackie unable to walk and free-spirited Frenchie off on her own, I split my time between seeking out benches on which to park one and running around the city looking for the other. I’d worn gym clothes and running shoes that morning which was a good thing because it felt like a boot camp class. As time ran out, I shepherded my limping partner to the assigned meeting spot. Ten minutes late, the French fry rolled in while the other teams chanted “diiisquaaaalified”. We lost.

Castle Howard, our requisite (and magnificent) stately home visit was next on the day’s itinerary. Owned by the 13th Earl of Carlisle, it was built in 1699 and has private living quarters still today. I can’t tell you anymore than that because I then found out this was NOT a straightforward point-of-interest visit.

We were instructed to notice whomever we came across as a “sexual being”. I skulked the premises studying and making notes on “sexual beings”, decency be damned, although I was somewhat unsure of what exactly I was supposed to record.

Then came the assignment. Our previously written bios were collected, with 5 things we disliked about ourselves scribbled underneath and each was given to someone other than the author. Using the person belonging to the bio+faults, as the main character, and using our list of sexual beings as secondary characters, we were asked to write a story set at Castle Howard. Oh, and the main character had to be involved in a steamy, sex scene. I now viewed Castle Howard as a shambles rather than a stately home.

Early the next morning, we were off to Pickering, boarded a steam train to Goathland station (Hogsmeade to Harry Potter fans) then drove through the north Yorkshire moors, the bleak landscape of Wuthering Heights, and on through Aidensfield, the location for the TV series Heartbeat. 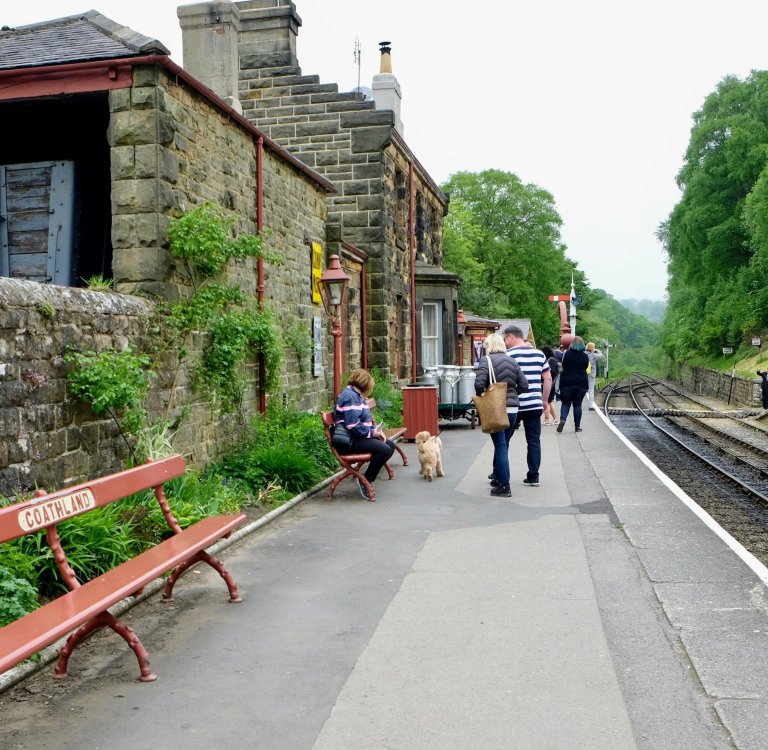 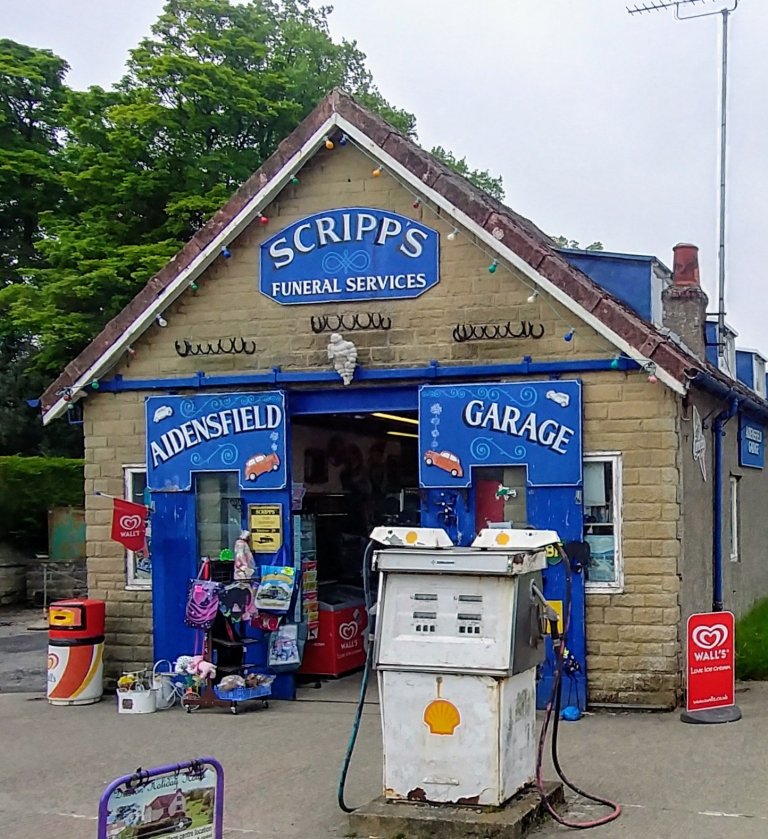 We arrived in the seacoast town of Whitby as the morning mist was rising, saw the ruined Whitby Abbey towering over the harbour and had a fish and chips lunch at the Magpie Café. I learned that Captain Cook once lived in Whitby and that Whitby had inspired Bram Stoker to write Dracula. I squinted into the mist hoping Whitby might conjure up a few sordid sex scenes for me but before any lustful and delicious thoughts arrived, we were packed into a van for Harrogate. 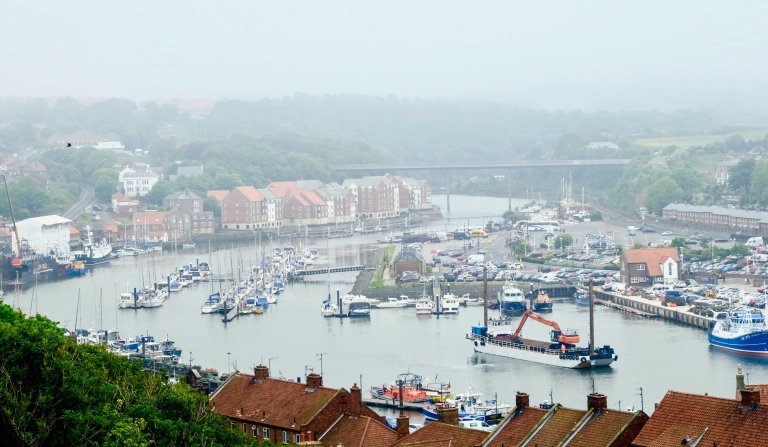 We spent two nights in Harrogate, which has a spa of Victorian vintage. The spa might have been a potential source of sexual beings but there was no time to look. Early the next morning, exercising alone in Harrogate Gardens, I wrote scenes full of body-aching desire in my head. This is not something I had expected to do on a Yorkshire holiday.

After breakfast, Fountains Abbey and a brewery tour were scheduled. The abbey was established in 1157 by 13 Benedictine monks that left St. Mary’s abbey in York. By the 1200s it had become one of the most powerful abbeys in the country. The monks were tanners, brewers, masons and shepherds and one of the largest exporters of wool.

Next to the Abbey are water gardens. They were built by John Aislabie, a politician in the 1700s who had fallen out of favour and retreated to create a garden estate. The French-Canadian wanderer and I set out on a 2-mile walk around the gardens. She grumbled about not being suited to write Harlequin romances and about the lack of writing time.

Not unexpectedly, while I was taking photos, she disappeared up a garden path. This time I thought twice about running off to find her. Instead, I walked back, harbouring indecent thoughts (involving Cillian Murphy)…only for the sake of scene development, of course. As we waited in the van, our French fry arrived 20 minutes late, escorted by the garden authorities. She had been found lost in the woods.

That evening, thankfully after the other guests had left the dining room, we read our carefully crafted erotica aloud. I’ll spare you my 50 Shades of Grey but I’ll tell you that the humour added by knowing the main character in each story was seated at the table made the sweltering, sex scenes hilarious. Our French-Canadian friend, however, blew us out of the water with vivid, detailed and risqué descriptions of the acts of passion, accompanied by hand gestures. I wondered if she’d stumbled across a sexual being in the bushes and obtained empirical inspiration while lost in the water garden woods. Hovering waitresses threw strange looks our way but…well…decency be damned.

A day in the Yorkshire dales ended our expedition. Richard the III’s castle in Middleham, a final pub lunch and walking to Aysgarth Falls in Wensleydale closed out the day. 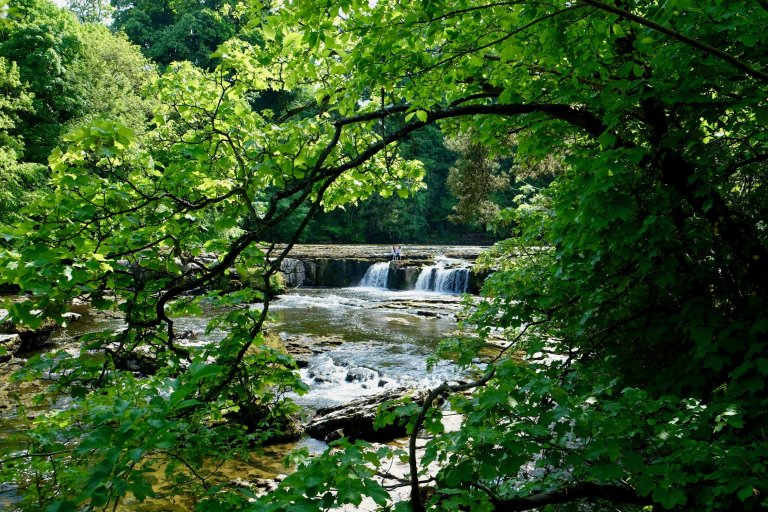 Our final task was to write promotion pieces for travel stories, a bit of a let-down after contemplating my new career writing steamy sex novels.

With each assignment there had been learning, discussion and laughter and as an added bonus, I’d seen Yorkshire. I’ll see things differently now when I travel and if I look at you oddly the next time I see you, you have reason to be nervous, especially if I bump into you at Castle Howard. 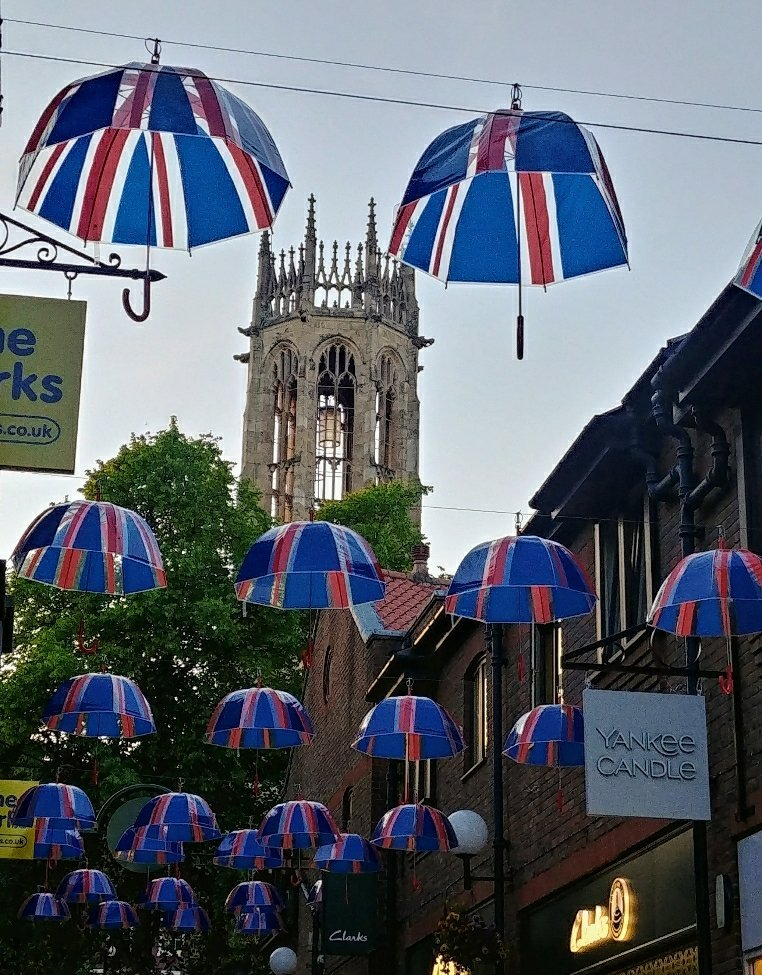 3 thoughts on “Decency be Damned: A Week in Yorkshire”