When it’s sunny and 17° C at home, we debate whether it’s warm enough for a T-shirt and shorts. The Scots, on the other hand, take off their clothes. It’s a Taps-aff day.  Taps-aff is a thing.  Yes, really, it’s in the urban dictionary. Men of all shapes, sizes and ages take their tops off and expose their white bodies (which is not always a good thing.)

I first noticed them on the front steps of the Kelvingrove Art Gallery and Museum in Glasgow. You don’t see this outside the Royal Ontario Museum in Toronto or the National Art Gallery in Ottawa, or in any Canadian city, even at 33° C, so it was a surprise to me.

In Glasgow they were everywhere. There were taps-aff men in the streets, lying in parks, sitting on benches, jogging down the street, having coffee, shopping and waiting for the bus.  Are sunny days above 15° C so unusual in Scotland or do Scottish men not own T-shirts?

I’d arrived in Glasgow after one and a half weeks of blue skies and comfortable temperatures in the highlands.  My highland holiday began at a B&B near Arisaig.  Our hosts apologized for the 22° C heat wave. 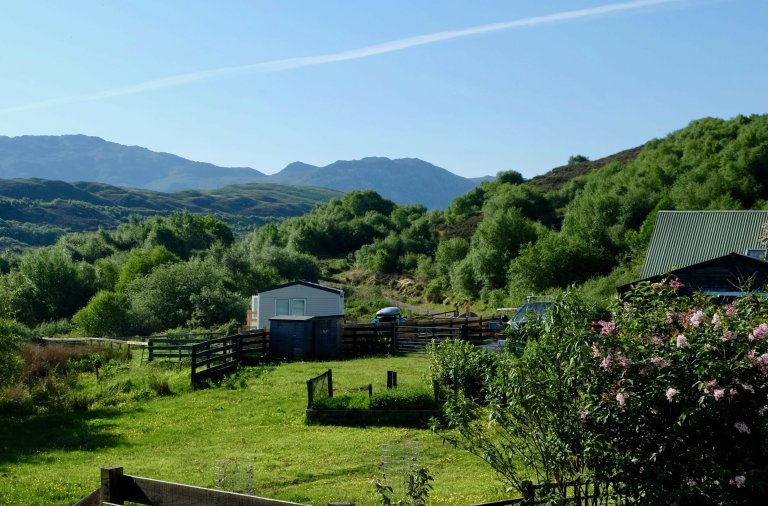 We did a walk there from Loch Moror to Loch Nevis and my Scottish companion questioned whether or not she’d make it in the heat.  I was just happy seeing Scotland in the sunshine. 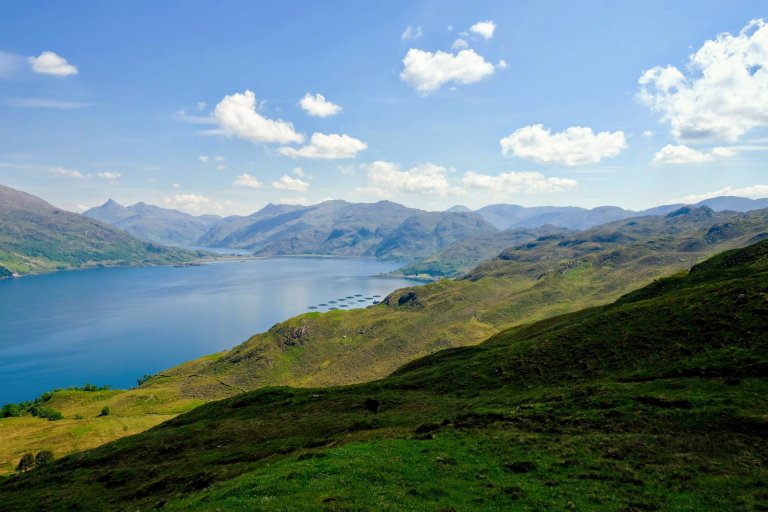 In addition to half-naked men, sunshine brings out caravans which lined the shoulders of the already narrow roads along the coast of the Scottish Med.  They seem able to park and set-up wherever they choose, another thing I’m not used to.  It was Taps-aff here too but this was the seaside, not the middle of the city, so it seemed perfectly normal. 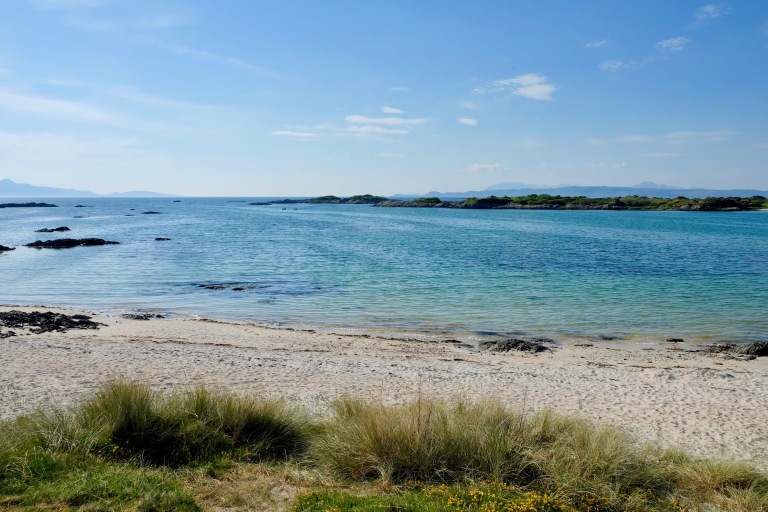 At 57° latitude, the late evening light was also new to me and the sun was still high late into the evening.  As we drove along the coast I was passenger and drive-by shooter.  I rolled down the window and the sun shone in my eyes as I squinted through the view finder and shot. A man in the water screamed to his mates “Jesus…she’s taking a bloody picture of me!!”. I lowered my camera and sheepishly tucked it away.  I had neither seen him nor expected a swimming party in the cold sea at 9 pm when it was 17° C.

We drove to Mallaig the next morning to catch a ferry to the Isle of Rùm.  While standing at the dock, I scanned the other foot passengers. All were fully clothed but in flip-flops, shorts and sleeveless shirts.  A few women wore summer dresses. I wore a fleece and long pants.  Should I change?  It was a blistering 18° C after all. 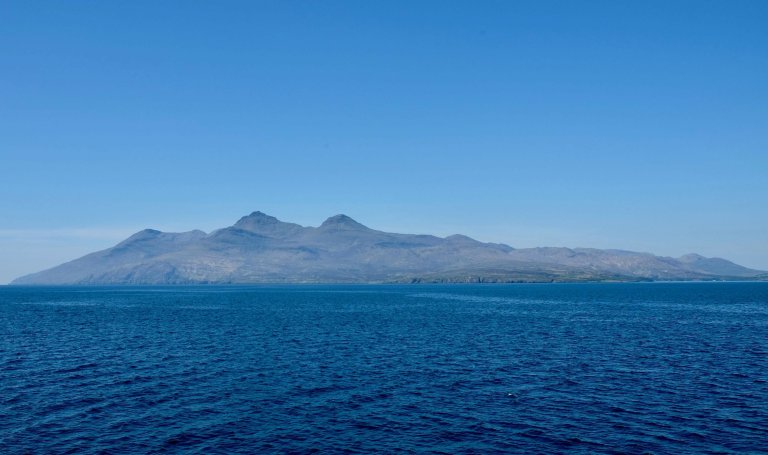 Rùm, a small island in the Hebrides, is a National Nature Reserve and a World Biosphere Reserve. It is mostly full of animals and only 30 people live there today.  A handful of small crofts, a (very) wee shop, a school with 3 students and a community hall comprise the village.  The community hall is also the café, bar, tourist centre, library, pool hall and church all in one room. I made up the church bit but there was a pulpit in the middle of the room beside the pool table. I wondered if they shoot a game of pool and drink a beer while listening to the sermon. Not a bad idea.

Wildlife conservation/management employs a few residents and a one-woman historical museum employs another. People seeking peace and quiet live here. They sell hippie things – painted stones, friendship bracelets and dreamcatchers from little sheds.  Jinty, who works in the wee shop doesn’t like people so she must be happy on Rùm..  Sour-faced and unable to make eye contact, she wills customers to leave her shop with her dead pan glare. 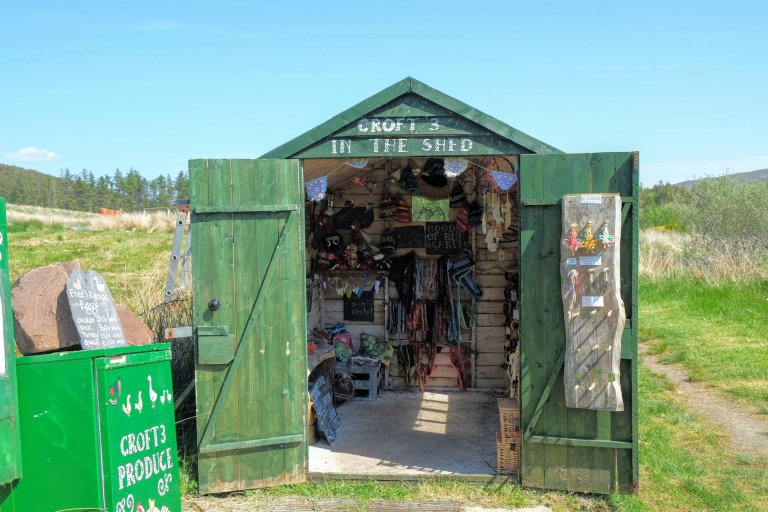 A small hostel, a B&B, a couple of yurts and a small campground control the number of overnight visitors. A few small sailboats were anchored in the bay and the owners slept on their boats.  With two ferries a day there are day-tourists too. They visit Kinloch Castle, an Edwardian pleasure palace, built in 1897 for wealthy Lancashire textile mill owner John Bullough. He bought Rùm for £35,000 in 1888, and changed its name to Rhum because he didn’t like the association with alcohol, despite the fact that he only used the island to party, drink and hunt!  In 1991, the Scottish government changed it back to Rùm.

Before the playboy, Rùm was cleared of people. The museum has a list of passengers that boarded the ship Tobermory during the highland clearances, when the Scottish government cleared the highlands of people to make room for sheep.  With mostly McLeans and McKinnons, a few McDermotts, McKinleys, McKays, McPhadens, McInneses, McMillans and the odd Stewart thrown in, the Tobermory sailed off and deposited them in Cape Breton, Nova Scotia, Canada in 1828.

We stayed at the teacher’s house because the B&B was full and we loved our peaceful  little cottage overlooking the sea and a two-minute walk from the ferry dock.

We walked 28 km in the sunshine the next day, to the other side of the island (Harris) and back.  The history of Rùm goes back to Mesolithic times when it was a stone-age base camp. The Vikings landed here and in the Middle Ages, enormous deer traps hundreds of metres long were built through the mountains.

Today, the red deer are protected and about 900 roam the island.  The Kilmory Glen and Mullach Mor deer have names and each has submitted a DNA sample.  I think you can find them on ancestry.com.

On our walk, we found a University of Edinburgh professor sitting on a hillside. She had been sitting on a Rùm hillside with a pair of binoculars for the past 40 years.  She was looking for Hazel that day and showed us Hazel’s diary.  She has data for 4500 of them and knows their parents, sisters, brothers, aunts, uncles, cousins, cousins-once-removed and friends. She knows who messed about with whom and their likes and dislikes.  My guess is she creeps their Facebook profiles too.

Harris, the village on the other side of the island is dead, really dead. It only has a mausoleum where Sir John Bullough, his son and son’s wife are buried and a small boarded-up house. It’s beautiful though and we ate our lunch there while watching the wild ponies of Rùm. 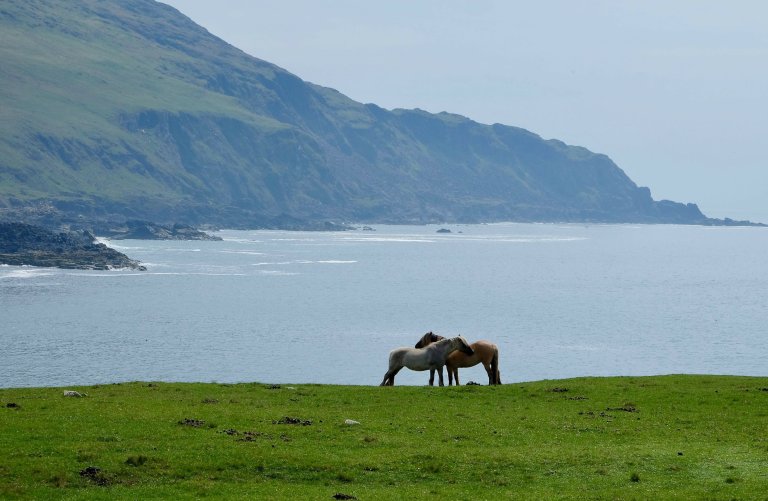 On day three we said goodbye to the kind teacher who shared her home with us and took the ferry back to Mallaig and  I went on to Ballachulish to visit family. 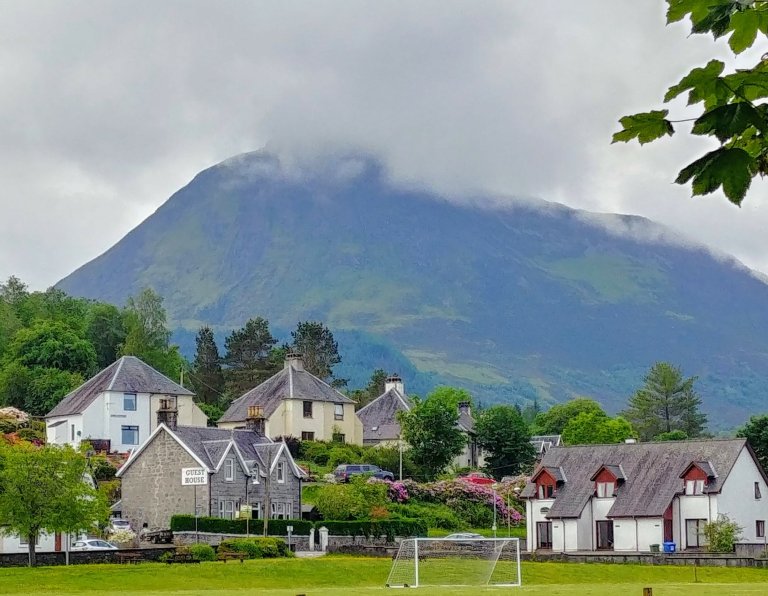 You can walk from Ballachulish to Glencoe.  The scenery is dramatic and it’s popular with walkers and climbers. On a walk around Glencoe lochan, I discovered a North American coniferous forest.  Sitka Spruce, Douglas Fir and Coast Redwood were planted there in the late 1800s. The owner then had married a Canadian woman, and had planted the trees to help her feel more at home.  It was a nice reminder of home but I was here to see Scotland.

The fishing port of Oban was next, with a stop at Easdale Island, site of an old shale mine.  The black shale cliffs surrounding the bay gave the place a cold, eerie feel but it was still taps-aff weather and the evening sea looked beautiful.  Each year it hosts the World Stone Skimming Championships with its beaches providing an endless supply of small, flat skipping stones. 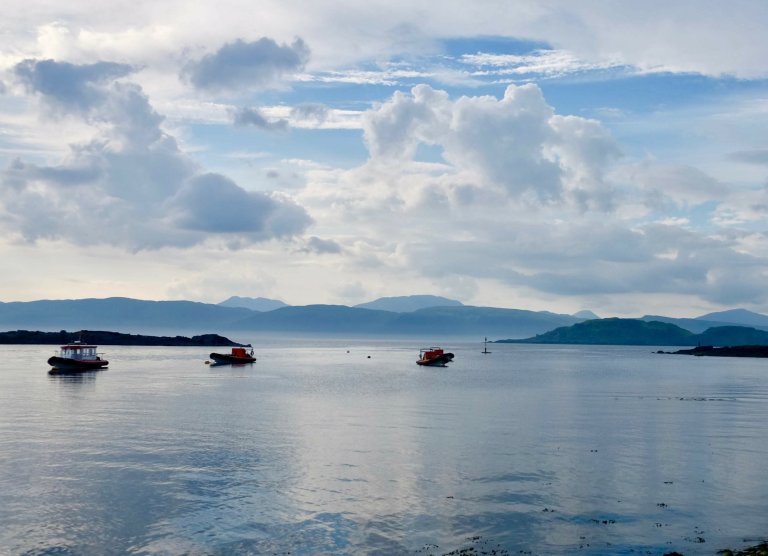 Then it was off to Glasgow, where this story began, for 3-days of viewing taps-aff men at the major tourist attractions.  My last weekend in Scotland was in Kippen, near Stirling for a final visit with family. At the Kippen Spring Fayre, everyone was talking about the heat and wondered how long they would last.  Some sought shelter from the sunshine in the nearby pub and inside the tea house.

The Scottish Highlands are beautiful and I couldn’t have asked for better weather. Buying a villa and beginning a new life here was tempting, perhaps I could write a book – Under the Scottish Sun.  It would probably only be as long as this blog, however; it began to rain the day I left.  I’m thinking maybe I should try Tuscany….

4 thoughts on “Under the Scottish Sun”